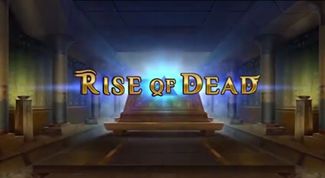 Play the Rise of Dead slot for a chance to win the 5000x top payout through the abundance of bonus features.

There are a number of ghoulish gods that have fallen asleep and it is time to wake them up and get their golden ornaments, in return for our favor. This seems to be a convoluted idea of the premise that is found in the Rise of Dead slot, which sets the player in a crypt somewhere under an Ancient Egyptian pyramid. In it, there is the potential of copping a 5000x top payout, and this can occur through a string event of the game's bonus features and boosters, such as the Mega Stacks, the Gift of Gods bonus, and the Ancient free spins.

The arrangement of the reel set is three rows and five reels, spinning on 20 paylines. One of the features that we get about the Rise of Dead slot is the open possibility of the entire grid becoming covered by the symbol of that nefarious Pharaoh King wild symbol, which brings an immense payout of 2500x on the line bet or 5000x during one of the bonus features. The free spins mode is also quite decent, with ten initial free spins that can become re-triggered with another round of free spins, depending on how many scatter symbols land at once at a turn.

How To Play Rise Of Dead Slot

One of the top features that we eagerly welcome here is the availability of low bets, such as the starting wager of £0.20. We say this because many of the new releases that have received lots of attention from the respective design teams, start with higher bets at £0.40 or £0.50. Now even though the Rise of Dead slots looks absolutely stunning, the bet starts low and that brings fresh air.

To set the wager all that needs to be done is for the players to select their desired bet per spin. This is done from the slider with the bet amounts below the reels set. Since the ten paylines are always active, there isn't a need for the players to figure out this setting, meaning the reels can be spun right away.

Couple of other buttons that can be used in the Rise of Dead slot are the autoplay and the paytable. Anyone who wants to set the reels spinning automatically can use the red circular button next to the Play button, and set a number of spins and a loss and gain limit. As for the paytable, it is the information board that contains all of the symbol pays and bonus feature information.

How To Win Rise Of Dead Slots

The game's bonus features are the most anticipated events on the reels of this Play N Go online slot. Certainly, there are symbol wins that can boost your balance, but it seems that the biggest amounts can be won when one of the bonuses strikes. The Gift of Gods is a random feature that happens during the base game. This is when reels one, three and five get a stack of symbols. If the other reels contain one or few of the same symbol on the stacks, this can result in a five-of-a-kind win, and if it is a picture symbol then the win could be up to 500x.

Another feature is the Mega Stacks which results in one symbol being selected at random to fill each reel with a stack of the same, thus elevating the chances for a winning outcome. And last but now least today are the Rise of Dead free spins.. The players can win free spins that can retrigger for an indefinite number of times and while it is at, the Mega Stacks feature is still on, which means there is the possibility of winning bigger symbol pays.

If you are ready to start your adventure into the ancient crypt of Rise of Dead, start right here by claiming the welcome bonus and play at one of our casinos.