Blazing Bells does more than just base-game wins. For starters the game comes with a wild and bonus symbol, which isn't too common in retro/fruit slots, even if they were released 2019 or 2020. But there is more to Blazing Bells, such as a 25,000x jackpot prize and win multipliers that can be won on a cascading/collapsing wins system. 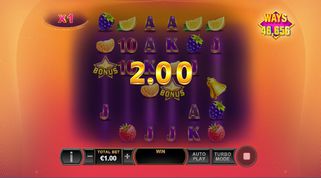 Playtech are adding a game to the classical fruit slot ensemble with the release of Blazing Bells slot. The game is very different compared to what we've seen come out in the past few months. Instead of a three-reel game or a three by five, Playtech are conjured up a grid of six by six with a multiway 46,656 ways to win.

Payouts in this game are made with the collapsing/cascading wins system. This means, each winning outcome is subtracted from the reel-set and those positions are filled with a new set of symbols. Multipliers and this payout system go hand in hand. Blazing Bells offers a win multiplier for each cascade, which is a great way to make the most from a bet.

The slots experts at Playtech usually don't risk it by making games with a mediocre design. On the other hand, the challenge to make a basic fruit game is just too big. Countless are the releases that offer a bunch of fruit and nothing more.
Here we have a warm background that morphs from an orange glow into purple. The fruit symbols stand out against a backdrop but they don't just look pretty. They can also spring into life when they become part of a winning outcome.

Blazing Bells slots makes some popping sounds when the fruits burst. This happens each time they form a cascade win. Throughout the game there is a downtempo soundtrack and a choice of sounds that are perfect for the theme.

How to Play Blazing Bells Slot

All of the needed buttons can be seen at the bottom of the reel-set. Before you make the first spin on the game it would be best to check out the total bet amount. If the default figure that's been given by the online casino works you can go ahead and press the Spin button.

If you would like to change the total bet, press the minus or plus buttons until you reach the desired amount of the bet per spin. The smallest bet in Blazing Bells slot is £0.10 and the biggest bet is £100.00 per spin. Regardless of the bet amount, the game will always play across the total of 46,656 ways to win.

The AutoPlay button opens up the list of automatic spins presets. As in any other game by Playtech, you aren't going to find additional options, such as to stop the autoplay mode on a specific amount gained or lost. So when letting Blazing Bells play in this mode, make sure to choose a bet amount that is in line with how you want to play the game.

Those players who want to check out the symbol payouts can select the 'I' button in the bottom right corner. The paytable has information about the bonus feature too, so it makes use of accessing it to see what the game can do.

How to Win Blazing Bells Slots

When it comes to the payouts, the paytable offers a view in numbers that we can call typical for Playtech slots. The amount of the winning outcome is multiplied by the coin bet, which is the total bet divided by 40. There is no need to crunch any numbers because the Blazing Bells slot does it all for you.

The most valuable symbol in the game is the one that the game has been named after: the bells. Six of these symbol pay 600x, five pay 200x and only two symbols pay 20x. The symbols that remain on the paytable carry amounts that are significantly lower. The raspberry and blackberry pay 40x for six of the same and the lemon and tangerine pay 32x.

This brings us to the cascading wins payout system which makes it possible for the player to gain multiple wins from the same spin and get a multiplier with each consecutive win.

There is a free spin bonus in the game that is triggered by the star symbol. Three, four, five and six of these symbols stopping anywhere on the reel-set result in six, eight, 12 and 20 free spins, in that order.

The win multipliers are active during the bonus feature. The game also has Special Symbols, which can expand to four adjacent positions, if a win outcome depends on their involvement.

The special symbols are highlighted by a golden glow and all of the paytables symbols can get that mark, except the wild and the bonus symbols.

Playtech are known for releasing their online slots as free play demo slots. Those who are interested to try the game out can do so at online casinos that host these games.

A cascading/collapsing win system, win multipliers and a free spins bonus checks all boxes that make up a good slot game, to begin with. The gameplay here is exciting thanks to the more than 40,000 ways to win, and the maximum potential payout is a rather sizeable 25,000x.

Discover the Blazing Bells slots by claiming a welcome offer right from this page and play at top rated online casinos.