Get your pick and start hitting that rock because there is gold waiting to be discovered, as well as some pure white diamonds. The Cascading Cave slot by Playtech plays on 20 always active paylines and five reels. There are multipliers during the bonus feature of up to 5x and symbol payouts of 2000x. 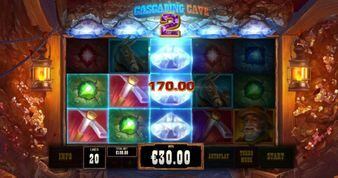 Get a free spins bonus and multipliers of 2x, 3x and 5x in the Cascading Cave slot, which has a top symbol payout of 2000x.

That on the edges of the crag isn't fools gold. It's the real deal gold that gets turned to cash as you land the matching symbol wins on the Cascading Cave slot.

The game takes place inside a mine where a band of eager get-rich-quick fellows are hard at work picking the glimmering stuff off from worthless rock. The game was developed by the slots experts Playtech who are adding a title to a growing list of mining-themed slots.

Cascading Cave offers a reel action that unfolds on five reels and three rows. Symbol win payouts are made from left to right on one or more of the 20 always active paylines. The game features multipliers of 2x, 3x and 5x during the bonus feature called Diamond Drop.

The way the game brings on the symbols is by collapsing the reels, where every winning outcome results in it disappearing and becoming replaced by a new set of symbols. When it comes to the payouts the most valuable symbol delivers a prize of 2000x on the line bet and there is a theoretical top payout of more than 250,000.

The designers at Playtech haven't gone over the top with this game, in all honesty. The symbols are well drawn and rendered and there is a decent dynamics to the game, but it isn't all pots and whistles.

Still, the players certainly aren't going to find it dull and unappealing. There is a visual experience to it that complements the online casino experience which is the primary stuff Cascading Cave slot is able to deliver.

There is a sound score that doesn't deviate from the usual explosions and hollow dripping sounds of the mine, albeit to an upbeat rhythm.

How to Play Diamond Drop Slot

The game's set up requires selecting the amount for the bet per spin. The number of the paylines are displayed in the box to the left of it. The bets can be selected by working the minus and plus buttons. The smallest bet is £0.20 per spin and that is one penny per payline. And it being a Playtech production, the maximum bet in the game is £500.00 as is the case with nearly all of their online slots.

There are few buttons that can come as useful in the game. The square button in the bottom right corner is labeled Start and that sends the reels spinning once. The button Turbo Mode causes the reels to spin and stop faster than the usual.

The Autoplay button provides you with the option to configure automatic spins. You can choose from the number of presets and also specify a total loss limit or a single win limit, which helps mind the balance.

How to Win Cascading Cave Slots

Winning the game is a matter of luck. The random number generator delivers both the winning and losing outcomes always at random, so each turn of the reels is a story of its own. In the Cascading Cave slot there are 20 paylines that can deliver more than one winning outcome. The game’s most valuable symbol is the diamond, which is the wild, and pays 2000x multiplied by the line bet.

The other few valuable symbols are the lead miner, whose symbol also pays 2000x and the donkey, which is worth 1000x on the line bet. All of the symbol wins at their highest potential are made with five matching symbols. The paytable is the source of information about the game rules and bonus features, and it can be accessed from the bottom left corner of the screen.

The diamond is the wild and it substitutes for any other symbol except the dynamite. That symbol delivers the Diamond Drop feature when two or three of the same fall anywhere on the reels

The feature results in numbers being added to each of the active reels of the diamond drop feature. The diamonds get the multiplier amount and whatever winning outcome is made with these symbols will be given the multiplier.

Those players who want to investigate their online slot before deciding to play it may want to check out some of the online casinos on this page. In the reviews section you can find casinos that offer demos that can be accessed by players who register an account. On the other hand, the smallest bet of just 20 pennies isn’t that big and anyone can make few turns on Cascading Cave slots to see what’s the game all about.

This isn’t the only cave and mining online slot in the world. There are those that have made a mark in the world of online casinos, such as the Dynamite Digger slot which is one of the most popular of the genre. There is another release, this one from 2019, called Dwarf Mine by Yggdrasil which has a fun gameplay as well.

Claim a welcome offer to discover Cascading Cave slots or any of the similar mining slots. Start your adventure at one of the online casinos on this page today.