Take a trip to the fair with Playtech's Fairground Fortunes slot! This five-reel, ten-paylines online slot brings the excitement of the fair to the reels with its four bonus features that could get you free spins, multipliers and bonus wins. With a total bet ranging between £0.01 up to £300, you have the chance of winning the game's maximum payout of 5000x your line bet! So, claim your welcome offer from the casinos featured here at Slotswise and spin for the chance to win big! 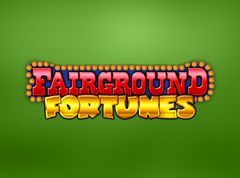 This five-reel, ten-line slot game is jam-packed with wilds, scatters, and four interesting bonus features. With a bet range between £0.01 up to £300, you could win the maximum payout of 5000x your line bet!

Different plush animals represent the paylines on the sides of the reels while all game buttons are placed below the reels. The whole screen is dominated by the dark red colour – just like the standard fairground tents.

The four game-specific symbols include a bouncy castle, a bumper car, a rocket ride and a Fairground Fortunes logo. They all award payouts for two, three, four or five identical symbols on a payline.

How To Play Fairground Fortunes Slot

Before spinning the reels of Fairground Fortunes slot, you need to select the number of active paylines and your line bet. When you press the plus and minus buttons of the LINE BET box, you can set your line bet. You can bet as little as £0.01 and as much as £30, depending on your bankroll. Next, you need to set the number of active paylines by pressing the plus and minus buttons of the LINES box. One is the minimum, but you can activate anywhere between one and ten paylines.

Once you have decided on your total bet for the spin, it ‘s time to get the reels spinning. Just press the green SPIN button in the bottom right corner of the screen and hope for some big win.

How To Win Fairground Fortunes Slot

Winning payouts in Fairground Fortunes slot are awarded for landing matching symbol combinations on the paylines. As we have mentioned earlier, the low-value symbols pay out for combinations of three, four and five matching symbols. The high-value symbols are more generous and award payouts for a two-of-a-kind combination as well. The highest payouts in the game are awarded by the Fairground Fortunes game logo with 5000x your line bet.

But the base game isn’t the only way to land wins in Fairground Fortunes slot. As we have mentioned before, there are four bonus features that can get you free spins, multipliers and bonus wins.

Three or more Duck Scatters trigger the Duck Shot bonus feature. The bottom row turns into a shooting range where yellow ducks appear. You need to shoot them by clicking on them to win prizes. Be fast and careful as timing is really important here. Each time you are successful, you move up one row and get the SHOOT AGAIN message. The game ends when there are no more rows to go up or when you are not asked to shoot again.

Landing three or more COCONUT scatters triggers the COCONUT SHY feature. All you need to do in this round is to crack open the coconuts on the screen to reveal your prizes. To throw a ball at a coconut, click on a coconut. If there is a prize inside the coconut, you’ll be awarded a bonus win. If the coconut is empty, or if you have won all of the prizes, the feature ends.

Three or more CLOWNY scatters trigger the CLOWNY’S CASH CLIMBER features. In this feature, Clowny swings his mallet to win you some prizes. To make Clowny swing his mallet, click anywhere on the screen. If the puck doesn’t reach the top of the ladder where the prize is, Clowny loses one of the three lives. If the puck reaches the prize at the top of the ladder, a bonus win is awarded. When this happens, any lost life will be restored and the next prize on the ladder becomes the new target prize. The feature ends when Clowny loses all three lives or if you have won all the prizes.

If you want to try the gameplay of Fairground Fortunes before playing with your own money, you should find the Fairground Fortunes free play.  The free play of the game lets you try all features and options of the real-money version without risking your bankroll. By spinning the reels with different bets, you can see how the game reacts and what it pays. Start with the lowest bet and spin at least 50 or 100 spins. Then, start increasing the bet until you reach the maximum total bet of £300. See what works best for you and what meets you playing style.

The free play of Fairground Fortunes slot also lets you see how the bonus features are triggered and what you can expect from them.

If you consider playing Fairground Fortunes slot, then you’ll definitely want to know the RTP rate of this online slot. For the inexperienced, RTP stands for Return to Player which is a theoretical calculation of how much a slot will return to its players over time. The RTP is expressed in percentages and is always below 100%. The higher the percentage, the better. The 96% mark is considered an average.

The RTP rate of Fairground Fortunes slot is 95.05% which is a tad below the average. This is not the worst RTP we have seen, and it shouldn’t keep you away from this excellent online slot.

There is no information on the variance of the Fairground Fortune slot. However, you can test it yourself and find out how it pays. There are three types of variance in online slots – low, medium and high. Low variance slots pay small sums more frequently with an occasional decent win. High variance slots mainly pay small sums, but not that frequently. However, if you land a big win it tends to be a huge one. Anything in between is considered a medium volatility online slot.

The game was released in 2013, so there have been more than few Fairground Fortunes jackpot winners, even if we can’t say that they have won jackpot prizes in the strict sense of the word.

The maximum that you can wager per payline is £30, considering that there are ten paylines and the total maximum bet is £300. The game logo is the special and most valuable symbol in Fairground Fortunes. The maximum amount that you can win in the game is 5,000 coins which can amount up to £150,000 if you’re playing with a £300 stake.

Even if you hit just four game logo symbols, the jackpot would still amount to 1,000 coins, which would come to £30,000 if you’re playing with £30. That amount would still place you among the Fairground Fortunes jackpot winners.

The second most valuable symbol in Fairground Fortunes is the rocket. Five rocket symbols across a winning combination will also grant you 1,000 coins. So even you play with just £10 per coin, you would still win £10,000, which can be considered an amount worthy of a jackpot winner.

With a rewarding base game and four excellent bonus features, this is one game that will definitely keep you entertained, plus you might hit a hefty prize. See if your favourite online casino has Fairground Fortunes slot. If you don’t know where to find the game, try the online casinos recommended here at Slotswise.

Claim your welcome offer from the online casinos featured at Slotswise and spin on Fairground Fortunes slot for the chance to win excellent prizes!

What bonus features does the Fairground Fortunes slot have?

Fairground Fortunes has four bonus features that are activated with the help of the four scatter symbols. They are called Free Spins, Duck Shot, Coconut Shy, and Clowny’s Cash Climber.

How to trigger free spin in Fairground Fortunes slot?

Land at least three Ferris Wheel scatter symbols in order to activate free spins. During free spins, the number of paylines is doubled and two additional rows of symbols appear on the reels. You can also trigger additional free spins during the free spins round.

What is the RTP of Fairground Fortunes slot?

The RTP rate of Fairground Fortunes slot is 95.05% which is a decent percentage given the fact that the average RTP of slots these days is 96%. RTP stands for Return to Player which is a theoretical calculation of how much a slot will return to its players over time.