Players can discover a reel set of three rows and five reels. These spin across 20 always active paylines that can turn up winning outcomes with three or more matching symbols. The smallest bet that you can wager on Frogs Gift is 20p and there are several low and medium stakes amounts for the bet. 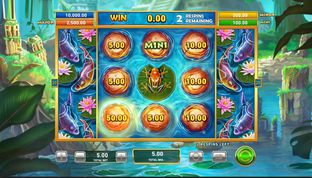 Playtech has dept in the waters of the Mayan emperors, in the famed pools close to Tikal with its step pyramids and marvelous ancient monuments. Players will have the chance to spin the reels with a number of jungle animals for a chance to win cash prizes in the base game or one or more of the four instant jackpot prizes.

Frogs Gift slot has a theoretical return to player (RTP) of above 96.00% and the variance is between medium and high. The game comes with a wild symbol that substitutes for all regular symbols, but there is also a bonus symbol that can trigger the special feature where players can win one of the jackpots, plus cash prizes, or even one of fhe smaller jackpots plus the Grand jackpot.

In terms of graphic design, the slots experts at Playtech have given the game a full spectrum of colors found in the Mesoamerican jungle. The animal symbols represent the high-paying category and are very well drawn and rendered. The low-paying category consists of the royal cards and these are too, three-dimensional and subject to animation when they are part of a winning outcome.

Frogs Gift slots has a strange name, that's for sure, but it alludes to the bonus feature where a colorful frog on a lilly pod takes up the center position of the grid of bonus prizes. The sides of the 3x3 grid are populated with trout. Overall, Frogs Gift is a game with decent graphics, nothing too amazing, but just right for a slots adventure.

How to Play Frogs Gift Slot

You can start spinning the reels at the very get-go by pressing the spin button. Depending on the casino, the default bet may be an amount that you wouldn't consider betting early in the game, or at all, so it is best to scope out the amount in the bottom-left area underneath the reel set.

Changing the bet is as easy as pressing the minus and plus buttons. The range of bets is wide enough to enable players amounts that can be considered low, medium and high stakes. This is a jackpot slot, so do expect the smallest bet to be at least 20p per spin.

One of the gameplay options on Frogs Gift slot is the fast-forward button, which can be seen to the left of the green Spin button. Pressing that button causes the reels to spin and stop faster than the normal. Another way to play the game is by opting for the Autoplay.

Autoplay lets you choose one of the automatic spins presets. Once you've made your selection the reels start to spin until you press the same button again or until you've reached the end of your balance, unless, a bonus is triggered and you win a huge prize, in which case the autoplay can resume its course.

How to Win Frogs Gift Slots

The winning outcomes are made with three or more symbols of the same kind across any one or more of the 20 paylines. There is a wild symbol that substitutes for all standard symbols and there is the golden disc with a jewel inside, which is the bonus symbol.

The jaguar is the highest-paying symbol, followed by the parrot, tapir and monkey. You would need five of a kind in order to score the big win for each respective symbol. On the other hand, the card symbols of Frogs Gift slot barely pay back the full wager, that is, if you’ve won five kings and aces.

Because this is a jackpot slot, the paytable can’t boast of hefty symbol payouts, so all of the attention is focused on the jackpot bonus feature.

Players need to land several of the golden disc symbols with a ruby inside to trigger the respin jackpot bonus. During the bonus feature, there is only one symbol that can drop on the grid - a golden nugget that carries a cash prize that is relative to the bet. Prizes such as 2x, 4x, 10x and more can be factored-in on each bonus symbol.

Also, the Mini, Minor and Major jackpots can trigger on any of the bonus symbols, but in order to land the Grand jackpot you would need to see the grid of nine positions filled up to the last one. The biggest prize in the game is 2000x multiplied by the winning bet.

Playtech has enabled online casinos that host their games to play this slot in demo version. This way, free credits don’t trigger actual cash winnings, yet players can get a feel for the base game and the bonus feature.

It’s been seen previously, this type of jackpot bonus, but it is popular with the players nevertheless. Three spins are given and each bonus symbol resets that number back to three so that players have a chance to win a jackpot prize or a raw cash prize based on the symbol values.