The game at hand comes with a layout of five reels and three rows spinning across 25 always active paylines. These turn up fruit symbols which are encased in ice cubes. Players can reach multipliers of up to 10x on consecutive wins, win colossal symbols which includes the wild. The wild symbol pays 200x on the payline bet. 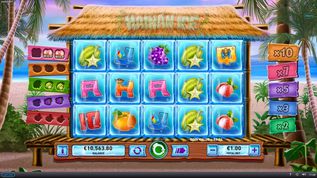 Jump to any of the paradise islands across East Asia and pursue sun and breeze along a number of sweet extra features on the Hainan Ice slot.

This is a Playtech production and for a change, they are departing from the epic fantasy genre to create something a lot lighter, yet not lacking features and the excitement of any good slots game.

Along with the base-game comes a meter for each of the fruit symbols. Three wins of that symbol brings benefits and the game has the cascading wins payout mechanism.

In terms of the volatility, Hainan Ice has it at low, while the theoretical return to player is 96.82% which is rather a nice combination of metrics for any player, casual or pro.

In terms of the graphics design the game at hand packs quite the amounts of fun.

It has that x-factor with the symbols which are inside cubes of ice. Hence the game's name. When there is a win outcome, Hainan Ice slots marks it by a cool effect it does on the reels. Each time there is a win, the cubes will burst and consecutive wins result in the same.

One of the reel-modifying features creates colossal symbols which can increase the chances for a winning bet. All the while, Hainan Ice chimes in on the win outcomes alongside a soundtrack that does well to entertain.

How to Play Hainan Ice Slot

Let the game roll its reels by pressing the spin button which is located underneath the third and middle reel. This action is going to deduct the selected bet once from the balance, but there is an option to engage in the game hands free.

To do this, press the double arrow button, which is to the left of the Spin button, and then select the number of automatic spins from the available presets. Playtech allows the option 'to infinity' too, so the Hainan Ice slot can autoplay until you press the stop button.

To select the bet simply utilize the minus and plus buttons in the bottom right area, in the window labeled Total Bet. In this setting you can choose between the minimum bet of 0.10 per spin and the maximum of 500.00. Regardless of the bet amount you are going to select, Hainan Ice will play across al 25 paylines.

There are few other buttons that are available to the players. The arrow button toggled on means the reels will turn faster and stop sooner than the usual. In the bottom left corner is the 'i' button which opens up the paytable, where you can find bonus feature details and payouts.

On both sides of the reels are displayed meters. The one on the left tracks the progress of the matching symbol wins and on the right are the win multipliers.

How to Win Hainan Ice Slots

Winning the game requires three or more matching symbols posting on any of the game's 25 paylines. These must start on the leftmost reel.

The game offers a 200x maximum payout based on one symbol type, that can result from a single spin. That figure is multiplied by the winning payline bet or bets, but this could go higher with the help of the multipliers and if that symbol falls on more than one payline.

The picture symbols are high paying and the cards are low paying. There is a wild symbol that can substitute for any, and this game plays its role in the Hainan Ice slot bonus features.

Most valuable symbol is the wild itself (200x), followed by the pineapple and then by the starfruit. Then there are the grapes and the oranges.

The cascading wins payout mechanism is can drive the game in dishing out wins consecutively, each time increasing the win multiplier.

The multipliers on Hainan Ice start at 1x and go up to 10x multiplied by the winning payline bet and the symbol payouts that have occurred on the reel-set.

Random event are the locked reels that produce colossal symbols which cover either two squares by two or three by three.

These can trigger in turn subsequent features, based on the type of fruit involved in the real modifier.

- triggered by three or more lychees; all of of a kind symbols are replaced by wilds.

- consecutive wins result three or more of these to collect on the meter, which then measures ensuing wins in an adjacent reels manner.

- results in win multipliers to double during the cascade, on top of applicable multipliers.

Playtech are releasing this game as a free play demo slot at online casinos that host demos for registered players.

This one is not to be overlooked. A low variance, high RTP and cascading wins. It seems like medium wins are possible, to say the least. Big wins, whatever that means in relation to the symbol payouts, may occur by reaching the 10x multiplier and getting one or more of the extra features activated.

Discover the Hainan Ice slots by claiming a welcome offer right from this page and play at top rated online casinos.