Spin the reels of Playtech's jungle-themed Jungle Giants slot for the chance to win up to 50,000 your line bet! With the action happening across five reels and 50 paylines, you can play from £0.50 up to astonishing £2,500 per spin! With a Wild and a Giant Free Games feature, there are plenty of ways to land a win. So, claim your welcome offer today and spin for the chance to win big on Jungle Giants! 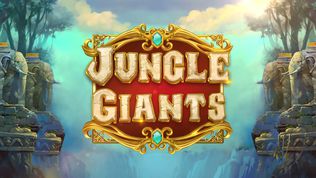 If we tickle your fancy, you can try it either for free or for real money at one of the featured online casinos here at Slotswise. Enjoy!

As said, Playtech has really given great effort to make this online game one of the better ones. Jungle Giants comes with 5 reels and 50 paylines, which create more than enough winning possibilities. The minimal amount that you can stake is £0.50, while the maximum is amazing £2500.00, which is one of the biggest stakes that you can wager on an online slot. With such bet range, Jungle Giants certainly cater to players of various bankrolls.

As you probably guess, this slot uses a jungle theme, and you will immediately get that vibe from the graphics as well as sounds of the game. The reel set is placed against a jungle background with elephant statues on the sides. The reels occupy the central position on the screen with the Jungle Giants logo at the top. All game buttons are placed at the bottom of the screen as well as the displays for the win and your total bet.

Jungle Giants slot comes with giant symbols that can cover reels 2, 3 and 4. If you manage to fill the entire screen with symbols from the giant symbol, you could win up to 50,000 your line bet. There’s also a free games round during which you could retrigger an indefinite number of free games.

As with most Playtech releases, Jungle Giants is available to play on different devices, so you could play the game from practically anywhere. 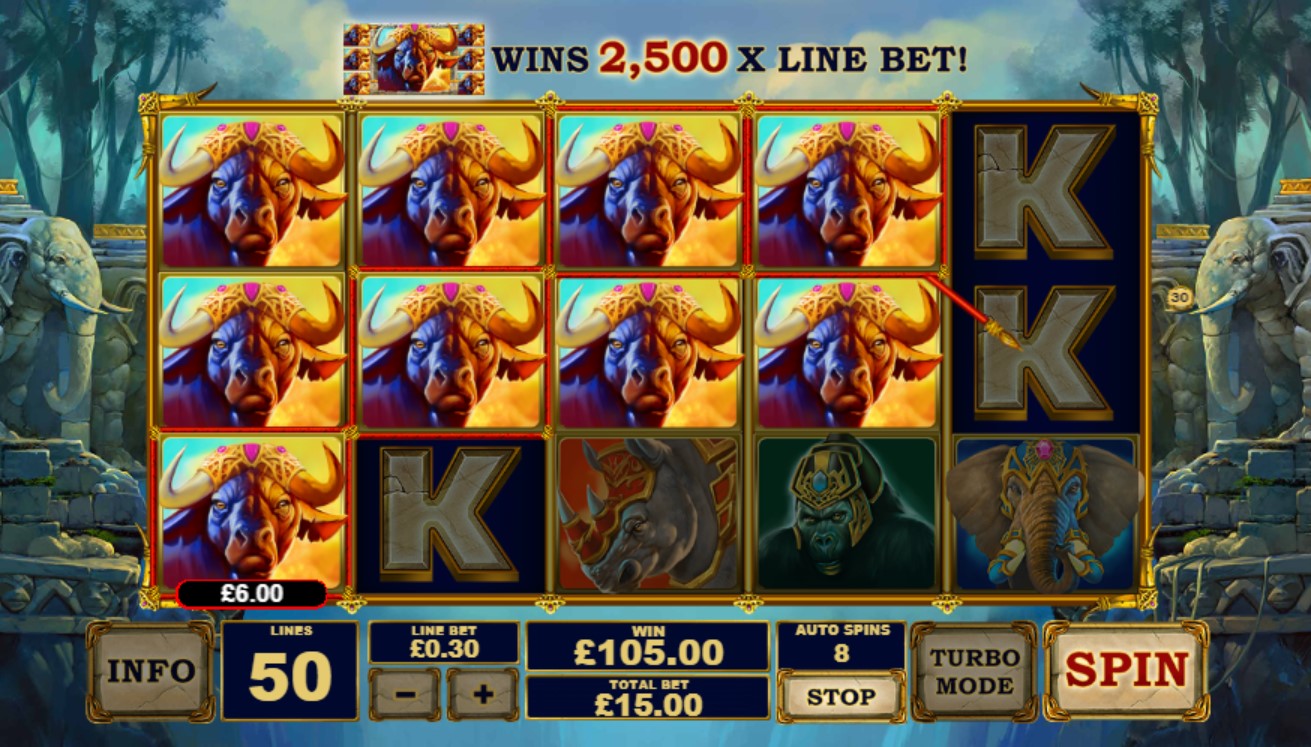 The special symbols in Jungle Giants include a wild and a scatter. The big red Wild substitutes for all other symbols, except the scatter, to help you create a winning combo. The Jungle Giants logo is the game scatter and the key to the Free Games bonus feature.

How To Play Jungle Giants

Jungle Giants slot is straightforward and relatively easy to play. This is mainly because you need to set only variable. Since you play with all 50 lines on every spin, all you need to set is your ‘Line Bet’.

Once you launch the game, go for the ‘Line Bet’ box below reel two. Here, you can go through all options for the line bet and select the one that suits your budget best. Once you have set this up, you just need to click the “Spin” button and the reels will start spinning. If you want the game to reveal the landed symbols faster press the ‘TURBO MODE’ button.

For the lazy spinners, Jungle Giants slot offers an “Autoplay” option which allows you to enjoy the gameplay without clicking the “Spin” button after each round. You can select from the four available options which include 10, 25, 50 and 99 spins.

You will also see the “Info” button, and when you click on it, you will be shown some crucial information regarding the rules, the paylines, the paytables etc.

As with most releases from Playtech, Jungle Giants slot is also available as a free play. This gives you the opportunity to try the gameplay of the slot before depositing any money. The free play is almost identical to the real-money version of the game, except for the banking element. You are playing with demo money, so all wins during the game cannot be banked. Aside from this, everything is completely the same.

You can set the line bet, use the autoplay feature, and activate the turbo mode as well. You can trigger the free games feature and see how generous the game is during the bonus rounds. When you feel that you have learned all there is to learn about Jungle Giants, you should move to the real-money version and try your luck. If you don’t have a favourite online casino and you don’t know where to play it, try some of the featured casinos here at Slotswise. Be sure to claim your welcome offer to kick-start your slots adventure!

How To Win Jungle Giants

Payouts in Jungle Giants are awarded for landing matching symbol combinations on active paylines. The amount depends on the type of symbol and its number. Low-value symbols will get you smaller payouts, while the better payouts are awarded by the high-value symbols. However, this is not the only way to land a win because of the bonus feature which has a huge winning potential. 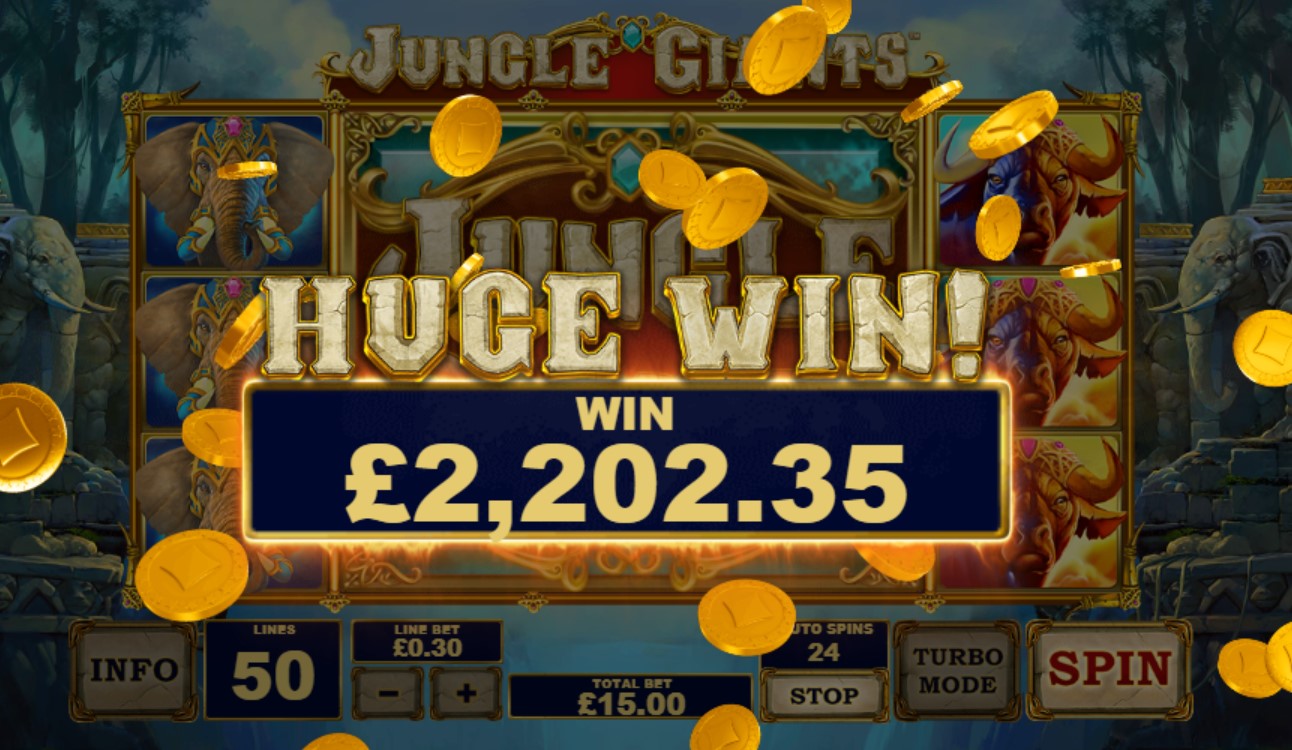 The bonus features are an addition to every slot game as they provide lots of fun as well as give you additional winning possibilities. In this segment of our review, we will focus on the Jungle Giants slot bonus features.

One of the most popular and widely used bonus features in online slots is the free spins feature. This feature appears in Jungle Giants as Giant Free Games. It is triggered when you cover all positions on reels two, three and four with the Jungle Giants logo symbol. You will be awarded eight free spins on a reel where the low-value symbols are removed. Additionally, reels two, three and four will contain 3x3 symbols and the first and last reel will contain stacked symbols. This provides you with great chances to fill the whole reel set with the same symbol for a huge win.

The return to player percentage is one of the most important things to look for when playing online slots. It gives you information on how much the slots returns to its players in the long run. An RTP of solid 96% is considered an average, so, in general, it is recommended to play slots with an RTP of 96% or above.

Jungle Giants has an RTP of 95.02% which lists the slot as a below-average RTP game. This is a tad below the average, so you shouldn’t worry much about it. With a wild symbol, free games, bonus symbol, stacked symbols etc, Jungle Giants has a lot to offer. Add to this the possibility to win up to 50,000 your line bet and you have a slot that could bring you some very lucrative rewards!

So, as you can see, Jungle Giants has everything that you need in order to have a pleasant gaming experience – neat and nice graphics, fast-paced gameplay, thrilling sounds, and of course amusing bonus features.

So, if you are interested, you can play this online slot at one of the casinos featured here at Slotswise. Don’t forget to claim your welcome offer first to kick-start your slot-spinning adventure!