Enter the world of superheroes and villains and play for a chance to win the base game top prize of more than 10,000x or one of the jackpot prizes, that can reach more than 1,000,000. The Justice League Comic slot has 25 paylines and five reels, which can turn up three reel modifiers and a free spins bonus. 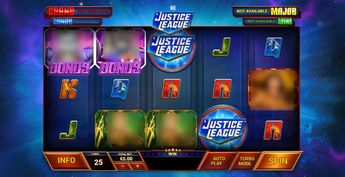 Play the Justice League Comic slot for a chance to win hefty prizes, bonus features, and one of the four jackpot tiers.

Perhaps Playtech pulled back all of their Marvel slots in 2017 but they didn't give up on comic book slots entirely. We aren't going to get into the versus argument about which are better, so let's just say that an awesome slot is being released that is based on the DC Comics Justice League franchise.

The Justice League Comic slot casts four heroes and three villains in an epic battle between good and evil and for the potential big win. The game comes with reel modifiers and three bonus symbols that can in turn trigger three bonus features.

Four jackpot tiers are available to the players, as this slot is part of the series that comes with this extra. As usual, on a three row, five reel slot game the wins are made from left to right when three or more matching symbols fall on a payline.

Justice League Comic slots has 25 paylines, which along with the arrangement of the reel-set, from this point in time, seems kind of dated. Nevertheless, the reel action is there to be had and the maximum potential payout from a single spin can be well over 10,000x.

It is fully expected that the game will be marked by some of DC Comics' epic superheroes. The players will find a high-quality comic book-like renderings of Batman, Superman, Wonderwoman and Aquaman. The gameplay is lively as all of the events on the reel-set are punctuated by moving bits and sounds.

Wins are accentuated with a light show of sorts and the bonus features invite more lively action. The quality of the Justice League Comic slot is rounded off with an epic soundscape that can find its place in one of the movies that involve any of the characters in the game.

Your reel adventure will be ready to start once you have configured the amount of the total bet.

All of the settings are lined on the horizontal panel underneath the reel-set and this is where you are going to find the Total Bet window.

Use the minus and plus buttons to choose the bet that you prefer and then go on to spin the reels by pressing the bottom right corner button.

The bets offer a wide range of choices. The smallest bet starts with £0.05 per spin, which is quite an unusual amount for Playtech slots.

On the other far end of the betting range is the maximum of £500.00 which is an exorbitant amount that's been typical for Playtech slots.

The Justice League Comic slots can be configured to play in autospins mode. This can be done by selecting the Auto Play button, which is to the left of the Turbo Mode button.

There are several number presets and a Stop on Feature option, but no stop on a total loss or a single win limit, so it is best to just mind your balance.

The game comes with four picture symbols that represent the high-paying category. These are Superman, Wonderwoman, Batman and Aquaman.

The prizes that are attached to each symbol respectively are 1000x, 500x, 300x and 200x. Each of these amounts can be made when five of the same land on a payline.

This may seem like a rare event, however, the wild makes it possible because it can substitute for any of these in more than instance.

What is more, the wild is the most valuable symbol in and of itself. If five land on a payline, the prize is 10,000x multiplied by the line bet, paying more than any other symbol in the game.

The rest of the symbols are the royal cards which pay between 75x and 150x multiplied by the line bet when five of the same fall on a payline.

The game comes with a free spins bonus feature, as well as three reel modifiers.

The latter feature is triggered when three bonus symbols occur on the reel-set. These appear only on the odd-number reels in the base game but can also occur in the bonus spins.

The three features in Justice League Comic slot are

Mystery Symbol, which assumes the heft of a colossal symbol of 3x3 that will reveal one of the game's standard symbols or the wild.

The Moving Wild symbol has wilds move from right to left with each turn until they are out of the picture. With each turn there is a multiplier that can reach up to 5x.

The Coin Respin feature replaces some of the game's symbols with coins. Each one carries a prize, but also there are multipliers that can increase the outcome.

Playtech aren’t known for hosting their slots on their own website, but you can surely find them on the platform they run, as well as at many online casinos, including those that offer demo slots.

By all looks of it, this slot looks and behaves much alike other releases by Playtech. The theme may be appealing to some and the potential jackpot prizes to others. The very, very low bet of 0.05 invites casual playing, just to test the game. The strongest sell here are the bonus features which modify the reels and the fact that they can occur during the free spins.

Discover Justice League Comic slot when you claim a welcome offer at the online casinos on this page.