Multiple wilds and a free spins feature where you can increase the spins to 40, by taking a chance, are some of the features on the neon-infused Midnight Wilds slot by Playtech Origins. The game of five reels and 243 ways to win has a high variance and a theoretical Return to Player of 95.00%. 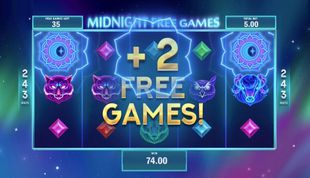 The players will find random wilds, free spins and the possibility to buy up to 40 spins as part of the Buy Feature mode. Midnight Wilds slot comes with 243 ways to win which can create winning outcomes consisting of three, four and five matching symbols on adjacent reels.

Playtech and their partners at Origins have created an online slot that takes the Northern Lights as its theme. The splendour of this natural phenomenon is the backdrop to a number of features that make up the exciting gameplay.

In Midnight Wilds slot, there are three rows and five reels filled with the game's two symbol categories: high-paying animals and low-paying gems. A wild and a scatter are the game's special symbols, where the former pays a prize with five matching symbols and the latter triggers the Midnight Free Games. 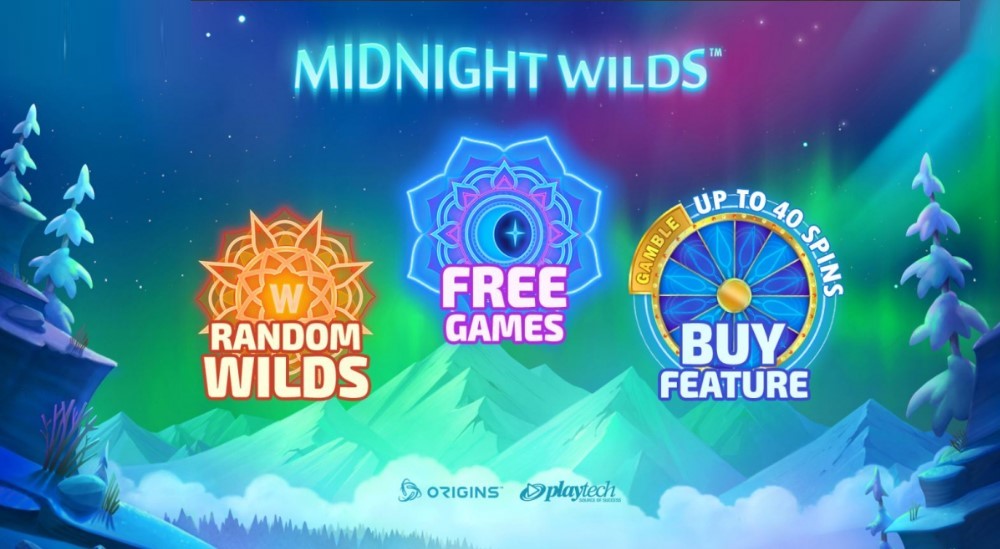 The design experts at Playtech's Origins studio have created a slot that resembles the number of neon-themed games that are out there. What makes this slot characteristic are the hues of purple and the look and feel that reminds of a neon glow. Midnight Wilds slot has that quality to it, and to a good effect.

All of the symbols have the same characteristics as the overall layout and background, but they have been drawn and rendered to contrast with the rest. The wild and the scatter symbols are the moving parts in Midnight Wilds slot, as they bring the game to life when they occur as part of a winning outcome and bonus.

Throughout the entire gameplay, there is a score of sound effects and a musical theme that make this a full reel adventure.

How to Play Midnight Wilds Slot

Setting up for the gameplay requires of the players to change the default bet amount, which is usually 1.00 or no more than 2.00. To do this you need to push the minus and plus buttons in the bottom left corner of the screen.

Regardless of the selected bet, the Midnight Wilds slot will always play the full 243 ways to win. To start the reels spinning, press the pink rectangular button in the bottom right corner of the screen. This action will spin the reels once, but if you want to take on the game hands-free, use the Autoplay mode.

Press the Autoplay button which is to the left of Spin, by selecting from the number presets which refer to the number of automatic spins. The Turbo Mode toggled on will cause the reels to spin faster and stop sooner.

In the bottom left corner is the Info button, which opens up the paytable, where you can view the symbol payouts and game rules.

How to Win Midnight Wilds Slot

In addition to the animal and gem symbols, the Midnight Wild slot has a wild symbol represented by an amalgam of a sun and a flower in orange hues, while the scatter symbol is a radiant, neon depiction of multiple lotus flowers in the same frame.

Any of the regular game symbols can make payouts with three or more matching on the reel-set. The matching symbols don't have to post on the same row, but they do have to fall on consecutive reels.

The most valuable symbol in Midnight Wilds slot is that of a polar tiger, albeit amber in colour. Five of the same pay 500x. The bull and the wolf symbols pay half that amount at 250x and the fox and the owl pay 150x.

The extra feature which has been important enough to give the game its title is with the wild symbol. Five of the same pay a prize of 500x and the symbol substitutes for all except the scatter, but also, up to five of these can fall on random positions on the reel-set.

The scatter appears on reels one, three and five only to trigger the midnight free games. In the event, wilds are posted on random locations, which helps increase the winning outcomes.

The free spins feature starts you with a proposition - you can spin the wheel of fortune for a chance to collect the eight spins, or gamble to win up to 40, or get four or none.

At a cost that is significantly higher than the active bet, the players can buy up to 40 coins spins by selecting the buy feature.

It is expected that Playtech is going to release the Midnight Wilds slot as a free play demo, and when they do it will be available at online casinos that host demo slots.

Midnight Wilds slot has random wilds, 243 ways to win, and a free spins bonus that can retrigger. The symbol payouts may not be so great with 500x on the payline, but consider the wilds that appear frequently and on more than just one or two positions. This is where the game strikes its balance for the high variance and big win possibility.

Discover the Midnight Wilds slot by claiming a welcome offer right from this page and play at top-notch online casinos.

What bonus features does the Midnight Wilds slot offer?

Midnight Wilds slot offers a Random Wilds feature where up to five wild symbols are added to the reels during the base game or the free spins. Also, the slot offers the Midnight Free Games feature that offers free spins.

What is the Buy Feature in the Midnight Wilds slot?

What is Midnight Wilds's RTP?

The Midnight Wilds RTP is 95%. This percentage is on the lower level of the RTP scale that states that the average slots RTP is 96%. However, this is still a perfectly acceptable number. The RTP stands for Return to Player and means that you should, for example, win £95 for every £100 you wager. Most of the wins come in the base game.