Scarab Queen slot is a five reel game with 50 always active paylines and features 4 different jackpots. This Ancient Egypt-themed slot was made by Playtech to impress. Scarab Queen has an RTP of 96.50% 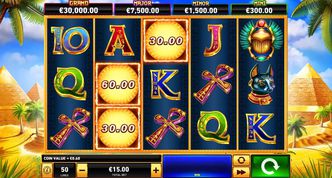 Scarab Queen slot is not just another Egyptian themed game. This online slot from Playtech has a lot of fun and exciting features. If you want to read more, including the 1,000,000 jackpot prize, you are in the right place.

The great river Nile saw many dynasties rise and fall, but none could boast such marvellous beauty and elegance such as that of the Scarab Queen. This is a queen and a high priestess who has become well versed with those ancient Egyptian insects known as scarabs.

The game was made by the slots experts at Playtech, who are unbelievably successful in making slots machines that fill the casino floors from Las Vegas to Monaco to Macau. The company has successfully converted its best machines into online slots, and the Scarab Queen is one such game. Set in the land of Egypt and nestled between three golden pyramids, the game features an amazing gaming adventure with five reels and three rows. There are 50 paylines too, which are always active, and these host an array of symbols that represent the regal golden artefacts of this ancient civilization.

To discover Scarab Queen you should start right here. Check out the review, get some gameplay details and then head on to claim the welcome offer from one of the casinos recommended here at Slotswise.

How to Play Scarab Queen Slots

Anyone who isn't well versed in slots is going to have a smooth time finding their way around on this game. The 50 always-active lines sit in place as such and there aren't any buttons to impact that. The only thing that needs to be figured out and that can be altered by the players is the Total Bet, and this can easily be done from the button that has the apt label below the value expressed in either pounds or euros or dollars, depending on the location of your online casino.

The smallest wager that starts you off on the Scarab Queen slot is £0.25 per spin - not a terrible sum for a game that has four jackpots. If anyone makes the Grand pot with this bet amount, the resulting prize is going to ring in at £500. If we raise the bet to £50, the amount of the Grand Jackpot will indubitably double. The highest jackpot in Scarab Queen slot is £1,000,000. 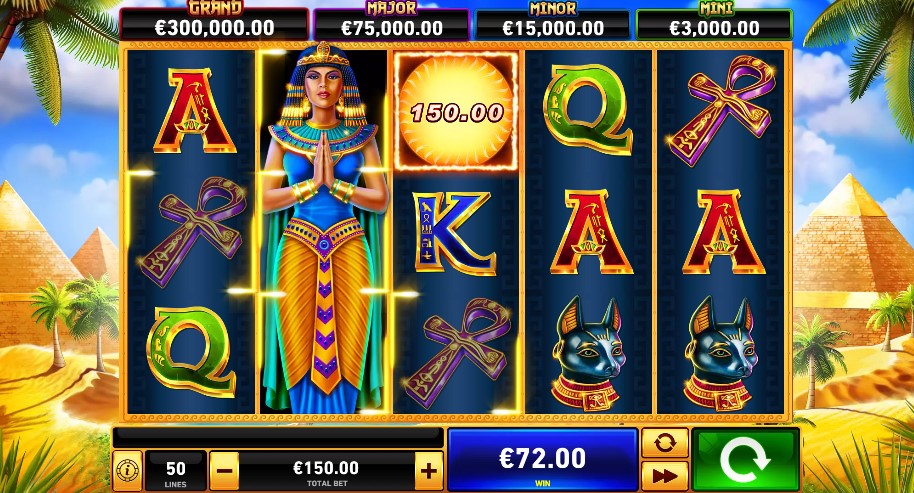 Autoplay Feature Towards The Jackpot?

There are many amounts in-between the low and the high extreme and the players can spend a minute browsing and finding a sum that they are OK with.

Like every contemporary slot, Scarab Queen too has autoplay that is toggled on from the button that appears like the 'recycle' symbol. This opens up a box with a range of free spins options. Many players approach jackpot slots with small bets and set the game on autoplay. If the game triggers the jackpot feature, the Scarab Queen slots will notify before initiating that bonus round.

The fast forward symbol speeds up the turning and stopping of the reels when toggled on. And last but not least, the paytable is located in the bottom-left corner of the game. This is the place where the players can discover the amounts of all the symbol pays, as well as bonus feature information and few other details that may or may not concern you as a player.

How to Win Scarab Queen Slots

Besides the Mini, Minor, Major and Grand jackpot prizes, the game has base-game prizes that are paid through the standard symbols, as well as bonus features, which make for an exciting adventure on the reels of Scarab Queen. The game has a Wild symbol in the shape and form (and face) of the queen herself. This symbol lands on all reels except the leftmost and on every single reel during the free spins bonus.

The Scatter is represented by the three pyramids that can also be seen as a background to the reel-set. Three or more of these symbols will trigger 8 free spins. The Sun symbol is another one that belongs to the speciality or bonus symbols. It can appear on any of the reels and it is responsible for throwing in a multiplier amount on the amounts that have been won on that round - the biggest multiplier of which is 50x. 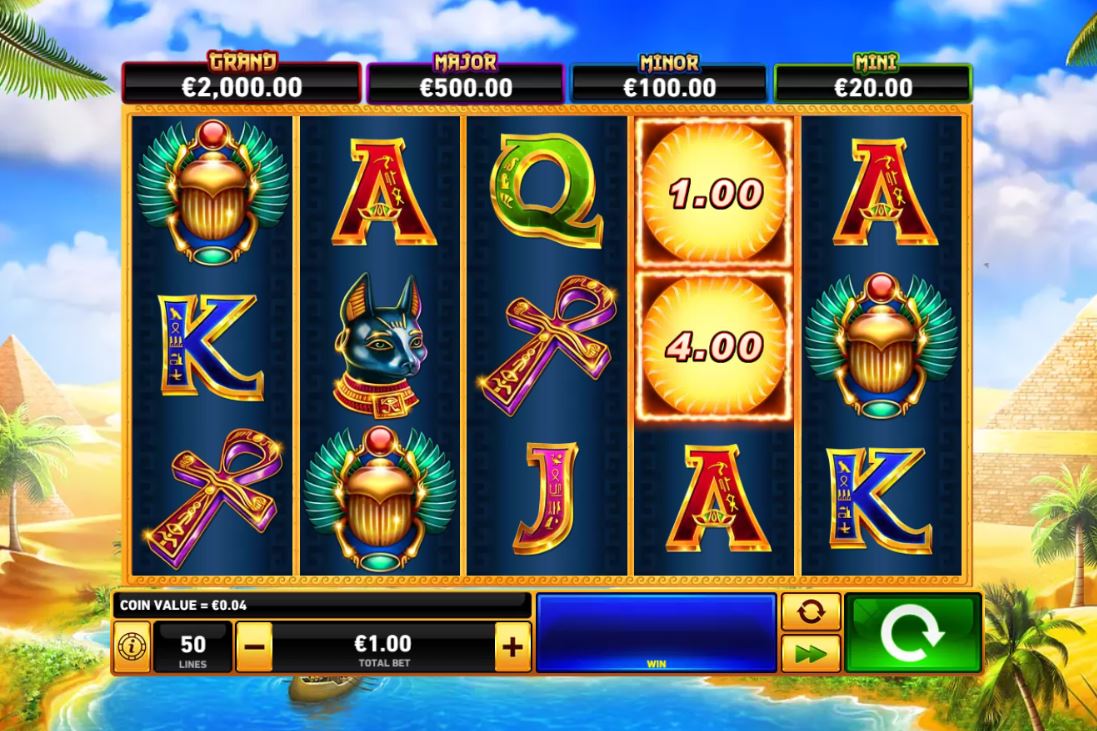 The jackpots are won through the sun symbol that has a star in it. Landing 15 of these symbols, which means, seeing the entire reel-set covered by it, results in the amount of the Major Jackpot as per the size of the winning bet. Any of the other tree jackpot prizes can be awarded during the feature called Fire Blaze Respin, which comes with the appearance of 6 to 15 Sun symbols. That symbol will come in two variants - a plain sun or with a star. This symbol is part of a play of probabilities and conditions that are best explained in the Scarab Queen slots paytable, but the result could be, nevertheless, winning some amazing money one of the jackpot prizes.

This Playtech release has it all. We aren't sure whether it will replace Book of Dead by Play N Go as the highest-ranking Egypt-themed slot, despite it being a jackpot slot, but that doesn't mean Scarab Queen isn't already popular. The bonus features and the jackpot prizes are a magnet to slots pros and casual players alike.

For a four-tier jackpot slot, this is one that has a rather decent and above-average theoretical return to player outcome of 96.50%. Compare it to other jackpot slots, especially those at land casinos where the RTP theoretical outcome hovers around 90.00%.

Start your virtual adventure in the ancient land of Egypt by giving Scarab Queen slot a try. Check out some of the online casinos that we offer here at Slotswise and discover some great welcome bonuses.

Valley of the Gods 2