Discover the inspirational Maya-Aztec themed Sky Queen slot by Playtech. This five-reeler has 50 paylines, a free spins bonus and expanding wilds. The game has four jackpot prizes with the highest one at £1,000,000. Besides all of this a great return to player theoretical outcome set at 96.50% is something to be mindful of. Claim a welcome bonus to start playing at one of the casinos on this page. 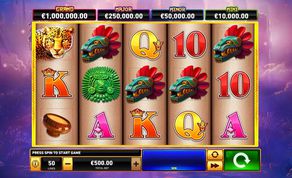 Discover many excellent prizes and play for a chance to win one of the four jackpots on the Sky Queen slots by Playtech.

After so many megaways and Wild West slots released in the first quarter of 2019 we finally get a theme that has been neglected for some time. In the Sky Queen slot we have a beautifully designed set of symbols that hail from the Mayan/Aztec civilizations. Dragon heads, jade medallions, jaguars and ritual implements are the stuff that makes the game, along with the head of a princess, adorned with a ring of feathers.

The game comes with symbols of a burning sun which has different numbers attached to it. These are the amounts of the cash prize that can be triggered by landing three or more such symbols on the reels. The number that delivers the most cash with the Sun is 50, and whatever amount is won, it will be multiplied by the total bet.

When it comes to the game's special features, the players will discover that the free spins bonus comes with stacked symbols, and that the wild is one of those. What is more, the Sky Queen slot is a jackpot game, offering not one but four jackpots. Having much to do with the sky, the sun symbol is one of the most important of the game, and if not the most valuable. Related to the sun symbol and the star symbol is the possibility of the players landing enough of these symbols so as to trigger the jackpot.

As we can see, there is already a solid environment in this slot game to bring about a thrilling time on the reels, and Playtech are no strangers to producing thrilling games. So let’s take a look at some gameplay details, how to set up the bet and what prizes can be won in this game.

Sky Queen certainly isn’t the first or the only slot game based on a Mayan/Aztec theme. In fact, it is fair to say that this is one of the most common and most frequently used themes by slots developers. Even this particular developer – Playtech, has released a fair share of games based on a similar theme.

Despite the fact that this is a quite common theme and that developers have nothing new to say on it, Playtech managed to deliver more than a decent game that is bound to become pretty popular in the upcoming period and even in the years following 2019.

Masks and items that were in widespread use during the reign of the Ancient American civilisations appear on the reels of Sky Queen, as well as animals that are typical for the that part of the world.

How To Play Sky Queen Slot

The game has 50 paylines that are always active. With this setting fixed in place, the Total Bet is the only button that is relevant to setting up the gameplay. The smallest bet that can be selected per spin is 25p and the biggest amount is £500, because this is a Playtech slot and they usually put a higher maximum wager cap on their games. The amounts of the jackpots vary depending on the bet. With the paytable being dynamic, the players can see how each bet amount correlates to one of the four jackpots.
The game's spin button is located in the bottom right corner of the page and to the left of it are two more buttons: fast forward and autoplay. The first causes the reels to spin and stop much faster compared to when that button isn't toggled. The autoplay function enables the players to set a number of automatic turns on the reels, with the possibility for the game to spin until a bonus feature is reached, in which case the autoplay option stops.
The paytable is located in the bottom left part of the page. This is where the players can find out about all of the symbol wins and details about the bonus features and the payline arrangement. The symbol pays reflect multipliers not on the line bet but on the total bert. This is why we have a low number of 75x for the highest paying symbol, however, that figure does not multiply on the line bet but on the whole sum of the winning wager.

How to Win Sky Queen Slots

There are four high-paying symbols in the game which represent multipliers on the total bet. The biggest amount is 75x and that is for five of the leopard symbol, but there are three 50x wins for three different symbols: the jade ornament, the dragon head and the clay pot. The rest of the standard symbols are the high and royal cards which start with the ten and end with the ace.

The Sky Queen slot has two specialty symbols and two jackpot symbols. The wild and the scatter/bonus serve to trigger the expanding wilds, and the free spins, respectively. The scatter is the stepped pyramid and this symbol comes with a 50x multiplier when five land on the reels. Landing three of these in any position, irrespective of the payline, will result in the starting eight free spins, which can be retriggered. During the free spins the wild can expand, as can other symbols in the game.

It’s 2019, so let’s be honest, it is a lot more likely that you’re going to play Sky Queen on your mobile device, than on your desktop computer, or your laptop.

If that is a case, you’re got nothing to worry about. Playtech are known for developing mobile-friendly slots, especially their newer releases. Playtech use HTML5 technology in the development process, which means that you won’t need to download any apps to play the game, simply open the casino site in your mobile browser, log in and you can start playing right away.

RTP (return to player) percentage is one of the most important pieces of information that you can get on an online slot, especially if you’re considering playing it. So, let’s get straight to it – the RTP of Sky Queen slot is 96.52%, which is higher than most other online slots, even though there are few titles with a higher RTP.

The RTP, as you probably know, is a theoretical return percentage, and is calculated over a large number of spins, so bear this in mind if you’re comparing slots on the basis of their RTP.

With a quite solid Return to Player theoretical outcome of 96.52% and 50 paylines, this jackpot game could deliver a total prize of £1,000,000 on the Grand Jackpot, although this is only an option if you're playing with the maximum wager. There are other jackpot amounts that could be won even on the starting bet of £0.25. The Sky Queen bonus features certainly help in the gameplay, and landing 15 sun symbols to cover the reel-set triggers the jackpot prize.

To play the Sky Queen slots start right from this page by claiming a welcome bonus to one of the casinos.