The game takes place underneath the pagoda of a ceremonial temple that houses the three rows and five reels. These spin across nine always-active paylines. Wins are made with at least three matching symbols. The game has a theoretical return to player (RTP) figure of at least 96.00% and the maximum payout amount is to be disclosed soon. 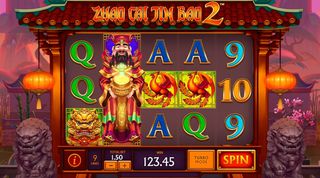 We wish you wealth and success! is what the title of this slot game states, as this is a popular greeting during holidays in China since imperial times. This isn't the only game going by that name. In fact, the Playtech Origins release is a sequel, which goes to say it is going to bring at least a couple of new things and some changes in the technical features, like the RTP.

In terms of features, Zhao Cai Jin Bao 2 slot has few features, however, it retains most of what it originally offered in the first game. Major element of the game and that which can give the winning outcomes a boost are the respins. This feature is in addition to the free spins bonus.

The game revolves both around the phrase and the person who bids you that greeting each time it appears as a stacked wild. That person, or personality, is one of the legendary emperors of ancient China, Cai Shen, who is also related to good fortunes, prosperity and money. So, Zhao Cai Jin Bao 2 slots is a game filled with symbolism, as well as awesome graphic design features.

The symbols are represented by low-paying cards (between nine and ace) and high paying picture symbols (lions, firebirds, dragon masks, and the wild). The winning outcomes result in animated sequences on the reel-set, which are pleasing to player who count these features in any slot game. The dynamic is kept up by a seamless spinning of the reels, as well as by a fine musical theme.

To set the game up for the adventure ahead you need to start with selecting a bet amount. This can be done by working the minus and plus buttons that can be found below the second reel. The game gives a nice reange of bets.

The Total Bet amount starts at nine pennies per spin and ends at £9.00. The amount that you've selected is shown in the same window and serves as a reference point when wanting to up the bet or go lower.

To start the reels spinning on the Zhao Cai Jin Bao 2 slot, simply press the red rectangular Spin button in the bottom right corner of the screen. To the left of it is the Turbo Mode which causes the reels to spin faster. Also available is an autoplay mode.

Select the Autoplay button to open up the automatic spins presets. This is one way to play the game, allowing the player to watch over the hands-free rounds. The 'i' button in the bottom left area of the screen opens up the paytable which offers information about the payouts and features.

Winning in the game requires at least three matching symbols. Four and five symbol wins bring bigger amounts. Even though the game has nine paylines, it is possible to receive winning outcomes consisting of more than a single payline.

The Zhao Cai Jin Bao 2 slot has a wild symbol, represented by the golden emperor, which is the most important symbol in the game, as it substitutes for any of the standard symbols but it also pays.

The game has a major feature with the wild. Whenever it appears as expanded wild on any of the reels, it triggers a respin. The wild remains and the other symbols that come on can create a winning outcome, which invites yet another respin.

The scatter symbols appearing in three positions award free spins. During the rounds the wild symbol can also expand and trigger respins.

The slots experts at Playtech Origins have enabled the game as a free play demo slot. Players can try it with free credits and try out its features.

While Zhao Cai Jin Bao was very colorful and made in a watercolor style, the second edition of the game is 3D and bold. Another novelty is the respin feature which is one way to gain better odds at scoring big wins.

Discover the Zhao Cai Jin Bao 2 slots by claiming a welcome offer right from this page and play at top-rated online casinos.