The game comes with a reel set of four rows and five reels. These spin across 1024 ways to win and winning outcomes are made on adjacent reels for at least three matching symbols. Players can play 5 Lions Dance with at least 20p per spin. The mathematical model of the specifications suggests this is a high-variance game that has a theoretical return to player (RTP) of 96.50%. 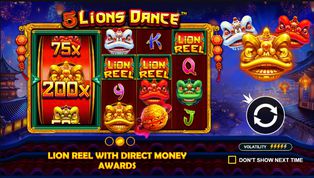 Even though lions never existed in East and South-East Asia, the animal exists as a traditional symbol and can be found in the art and stories of that world. 5 Lions Dance slot is new online slot by Pragmatic Play that puts the player in front of a ceremonial setting to prepare for the dance of the lions. This event may be summarized as a string of winning outcomes from which players may win up to 2700x multiplied by the total bet.

Besides the traditional ceremonial music and the thrilling graphic design, the player will find a game that has engaging moments. The 1024 ways to win payout system is always fun to experience, especially when the wild symbol posts in one or two positions for the potential big win. The main symbols are five lions of a different color; another important symbol is the scatter because it is responsible for triggering the bonus game, however, the king of this savanna is the Lion Reel feature and we'll go over it in a bit.

In terms of graphic design, the game comes with an exciting set of symbols that are styled in the Chinese dancing dragon technique. Anyone who has seen a long procession of carnival-goers on the Chinese new year may have seen a lion, which has more of a dragon-like appearance. Nevertheless, this set of symbols is animated when there is a winning outcome so let's hope those lions get to roar more often.

But the 5 Lions Dance slots has few other moving parts too, besides the reels of course. The background is of a quiet city with beautiful pagodas. The traditional Chinese firecrackers are waving from the reel set, waiting for a big event to happen so that they are unleashed in celebration. We mentioned just above the wonderful sound theme, so if you decide to play 5 Lions Dance, just keep the music on and enjoy it.

How to Play 5 Lions Dance Slot

Playing the game requires becoming familiar with the reel set and this can be easily done by glancing at the places that we point out to in our 5 Lions Dance slot review. The game has all of the buttons in a familiar place, at least to those who are familiar with slots by Pragmatic Play.

The button that can make the reels spin is located in the bottom-right corner of the screen. This is where the players can see the minus and plus buttons that are pressed to raise or lower the bet amount. In this respect, the game has a minimum bet of 20p per spin and a maximum of £100.00.

Autoplay is the option that lets you play the game hands-free. This button is located below the one for Spin and when you press it a table opens up with all of the options that enable you to set up the automatic spins mode.

Another useful thing on the 5 Lions Dance slot is the 'i' button that opens up the paytable. This is where players can find information about payouts and bonus features.

How to Win 5 Lions Dance Slots

Winning requires three symbols, or more, to land on adjacent reels and start on the leftmost reel. The game comes with a wild symbol that can substitute for any, except for the scatter and the Lion Reel symbols. Unlike is other games by Pragmatic Play, in the 5 Lions Dance slot the wild itself is a non-paying symbol but this is only because the game comes with a third special symbol that can trigger an instant big win.

The scatter symbol, which is represented by a drum, is the bonus symbol that appears on the odd-numbered reels. When three of these land on their respective rels, the game triggers ten free spins and returns your wager at 1x.

The feature comes with an extra chance for a win and this can trigger on any spin. Basically, after a win has been made, the lion heads transform into another lion symbol and pay again if they are part of a winning outcome. The game can retrigger with another set of Bonus symbols.

The Lion Reel symbol can land on reels three, four or five. Three symbols trigger a bonus where the first two reels can turn into a fully expanded Lion Reel that comes with a multiplier between 5x and 200x. The Lion Reel spins once to award a random win amount that falls within that range.

Players who want to experience the game and try its features are welcome to discover the free play demo slot, which is possible to do at online casinos that have this game in practice play mode.

The payout potential is decent but not overly exciting, but nevertheless, it does make it worth exploring a game whose features can combine for a thrilling time on the reel set.

Discover the 5 Lions Dance slots by claiming a welcome offer right from this page and play at top-rated online casinos.