Players can discover a layout of three rows and five reels that spin across 20 fixed paylines. Wins are made with at least three matching symbols, however a wild is also there to help those outcomes. The theoretical return to player (RTP) of Great Rhino Deluxe is 96.50% and variance is medium. In terms of the maximum payout potential, the game can trigger 6000x multiplied by the bet. 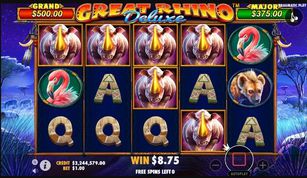 Pragmatic Play are the slots experts behind the classical online slot that took players to the African savanna for an encounter with the fierce rhino. This is the second installment of the game, with few notable differences in terms of the potential payouts, technical specs and gameplay improvements. Great Rhino Deluxe slot comes with two jackpots and a dynamic stampede of a gameplay.

Great Rhino was memorable for the smooth look and feel of the symbols and the few animated details. This game brings some improvements, however, the essence remains thanks to the Super Respins and the free spins bonus. Two jackpots can pay 375x and 500x multiplied by the bet, however, the maximum payout potential is more than these instant prizes.

In terms of graphic design the game revolves around the lead symbol - the gold-horned rhino, which can be seen running mercilessly on that savanna. This symbol is one of the animals that represent the high-paying symbols. The other animals are gorilla, flamingo, hyena, cheetah and crocodile.

Low paying symbols on Great Rhino Deluxe slots are cards that range between jack and ace, and are made of wooden planks with African tribal etchings. The game celebrates winning outcomes with coins engulfing the reel-set, which is another feature that keeps the dynamism up. A musical theme fits the picture perfectly with its African-themed conga lines.

Start your reel adventure in Africa by figuring out the size of the bet. The active bet will show in the bottom left area of the screen, and the setting is in the bottom right area. Press the minus and plus buttons to select an amount. The smallest wager per spin is 20p and the maximum is £100.00.

Players can enjoy Great Rhino Deluxe slot in autoplay mode, which means, there is no need for manual inputs on the Spin button. Press the Autoplay bar below the spin button and choose a number of automatic spins from the available presets.

Players can set optional conditions that can make the game stop autoplay when a specific sum has been reached below the starting balance, or for a single win limit. Another option is to stop autoplay when the free spins bonus or jackpot bonus game is triggered.

Players can view the paytable by pressing the 'i' button or change few settings by selecting the menu button, both of which are located in the bottom left corner of the screen.

The game makes payouts on 20 paylines and there can be more than a single win that results from the same bet.

The game has a wild symbol and a scatter. The latter triggers the free spins bonus. Another symbol is the rhino, which triggers the Hold & Win jackpot bonus game.

In terms of payouts, Great Rhino Deluxe slot has a wild symbol, represented by the rhino drum. This symbol substitutes for any, except the bonus symbols, and also pays a prize of 25x for five matching symbols.

Land three scatter symbols, which are the savannah tree, to start with ten free spins, The bonus feature collects each rhino that lands, but only to unleash all of them across the reel-set at the last spin. Sadly, the bonus feature doesn't retrigger or add extra spins, unlike the Hold & Win jackpot bonus.

In that regard, six rhinos on the reel-set trigger the jackpot game. The triggering symbols become sticky for the three respins that follow. Each rhino symbol adds one respin, instead of resetting the three. Nevertheless, some of the rhinos come with a 2x multiplier, which can add up.

The Gran jackpot prize of 500x is paid when 15 positions are filled by the rhino. One less, and you get 375x as a consolatory prize.

Pragmatic Play has this game released as a free play demo slot at online casinos that host demos, thus enabling the players to check out its features and gameplay with free credits.

To decent jackpot payouts, some alright payouts on the paytable for the base game and a free spins bonus. This game does it all, however, it is the bonus games where players are more likely to land big wins, as opposed to the base game.

Discover the Great Rhino Deluxe slots by claiming a welcome offer right from this page and play at top-rated online casinos.