With a return to player theoretical outcome of 97.08% we have an above-average slot game in the Medusa Strike slot. Playing or five reels, three rows and 243 ways to pay, this is a consecutive reels win type of a slot game that has four in-game progressive jackpots. The largest of these is 1000x on the winning bet. There are two mighty symbol wins, one with the game's scatter symbol and the other with the title-giving medusa. Claim a welcome offer to play at one of the casinos on this page. 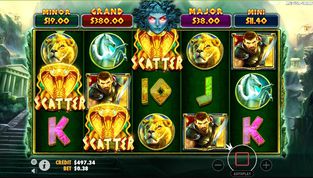 With a set of amazing symbol wins and an ultimate jackpot prize of 1000x on the winning bet, the Medusa Strike slot is one to consider checking out.

There comes a time when one needs to climb up to the temple and face the mysterious Medusa, and raise a mirror up to her eyes. Perhaps this isn't the idea of the Medusa Strike slot, but we have a wild imagination, and we like imagining how the strongest of winning combinations occurs on this slot and gets us the game's Grand jackpot.

You can play Medusa Strike on its five reels and three rows on a starting wager of £0.38. This isn't the most favorable starting bet for those who want to play slots casually, on the smallest amounts possible, but there is a solid justification for that, and that is the fact that the mini jackpot on that bet is £11.40, the minor jackpot is £19.00 and the major and grand are £38.00 and £380.00 respectively.

How to Play Medusa Strike Slot

The game's bets at the higher end of the spectrum are £190.00 for the maximum, and that is to the tenth and highest level and on a coin value of £0.50. There are many bets in-between that can be arrived at by opening up the board, which is accessible from the plus and minus buttons at the bottom right corner of the page. Although the starting bet isn't in the range of pennies, there are bets that count as reasonable amounts to wager for the chance of a big money return.

The Medusa Strike slot has a total of 243 ways to pay and these are always active and across all of the five reels and three rows. The game offers the autoplay option, which is natural for a contemporary slot. This control lets the players set up a number of automatic spins with the option to set a win or a loss limit. The game's paytable is a pretty useful source of information for the symbol pays, the bonus features and what sequence of events and symbols can trigger one of the jackpot prizes.

How to Win Medusa Strike Slots

The most valuable symbol in the game is the medusa. It pays a prize of £1,000 when five of these same symbols are lined on adjacent reels. Two or more symbols can appear on a single reel and that would count towards the entire winning combination if there are other such symbols touching that reel and the others do so  subsequently. The next in line of the most valuable symbols is the warrior. His symbol pays £750.00 for a string of five when five line the reels.

The rest of the picture symbols are a lion, a bull and a pegasus. The lower-pay symbol category has the high cards, starting with the nine and ending with the ace. The wild is represented by a Parthenon and it substitutes for any. The scatter is the golden snake and this is the ultimate symbol that pays the most, precisely £9,500 for the highest wager, save for the major jackpot prize.

The game has a free spins feature and it is triggered when three or more of the scatter symbols stop on adjacent reels. The lucky player gets 10 free spins. This feature can be retriggered and there is no limit as to how many more times. It appears that three of the golden snakes symbol may not be such a rare occurrence, but four or five on consecutive reels ought to be a rare sight, considering how much these symbol wins pay.

At any rate, during the Medusa Strike free spins feature there is something called Special Reels, which means, the low-pay symbol category are not present on the reels, with only the picture symbols and the two specialty symbols (wild and scatter) vie to combine for the winning outcome.

The jackpot prize is randomly triggered if there is a wild on the screen during the base game. In the event, there is a second screen pick-me game where the player is offered to pick through some coins for one of the four jackpots. The grand jackpot is 1000x on the total bet, while the mini is 30x. In this game. select the gold coins and if you get three matching jackpot category coins, that jackpot is yours to claim.

This is a high volatility game with a theoretical return to player outcome of 97.08%, which is rather high for a jackpot game. High volatility means, there are fewer wins to be had, however, the possibility for a big win occurring is higher.

It’s a decent game coming from a well-known provider. The symbol wins are quite alright and playing with high bets could potentially lead to some big wins. The jackpot prizes are quite big, even when playing with the lower wagers. On top of it all, there is a free spins game and a mighty scatter symbol.

Play the Medusa Strike slot at one of the casinos on this page. Claim a welcome offer by selecting one from the list.