Tickle the Money Mouse and play for a chance to win exquisite prizes on this Pragmatic Play slot. The game has 25 paylines that spin across three rows and five reels. It offers some exceptional cash prizes with five-symbol wins. The volatility is medium leaning towards high and there are bonuses to be triggered, as well as a jackpot prize. 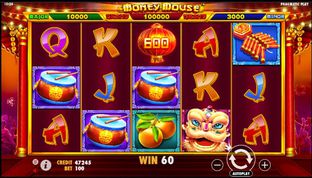 Play the Money Mouse slots for a chance to win exquisite prizes and a grand jackpot prize.

In the tradition of ancient China, mice are revered for a number of their attributes. This rodent is a hard-working creature that is known to care for its offspring.

Figurines made of clay portraying a family of mice sitting on top of gold coins can be bought at marketplaces in China and did you know that mice share 90% of DNA with humans?

The Pragmatic Play game called Money Mouse slot celebrates the creature in a way that is very much fitting to its attributes. This is a jackpot slot that comes with a number of extras such as stacked wilds, colossal symbols, money respin bonus and blazing reels.

The in-game progressive jackpot can be won on a reel-set of three rows and five reels. These spin across 25 always active paylines and wins are made with three or more symbols of the same kind starting on the left reel.

Pragmatic Play have become well versed in making online slots with East Asia and Ancient China themes. This is one such game and it reminds very much of the Caishen's Cash slot and Tree of Riches slot if it weren't a three reels game.

Nevertheless, like the titles noted above, Money Mouse slot offers an entertaining dynamic on the reel-set. The symbols are animated, especially the money mouse itself.

The layout is in the sign of the gold and red colors, and it is obvious that this slot celebrates the Chinese New Year as there are fireworks in the background.

How to Play Money Mouse Slot

In the manner of so many other releases by the same company, this game too has all of the needed controls in the bottom right corner of the screen. This is where the players can set up the bet, spin the reels and opt for the autoplay mode.

One you click on the minus or plus buttons, a table opens up with three fields that impact the bet amount. Coins Per Line has values between one and 10; the selected number extrapolates the coin value across the paylines.

The coin values in the Money Mouse slot rnge between one penny and £0.50 per payline. Hence, when you select the highest amount in both fields, you get the maximum bet of £250.00 per spin. The smallest bet is with one coin per line and £0.01, which amounts to £0.25 per spin.

To spin the reels press the double arrow button. It will deduct the active bet once for each spin. Another way to play is by pressing the space button, while online slots on mobile players can press it on the screen.

The autoplay option is there too, and lets you select from the automatic spins presets but also add conditional stops, such as on cash decrease amount and cash increase amount.

How to Win Money Mouse Slots

The payouts are made according to the winning payline bet. So, when landing a win consisting of four peaches with a bet of 25 cents, the 50x win on the line is multiplied by one penny.

Furthermore, Money Mouse slot has a dynamic table that shows the payouts rising as you change the amount of the bet. The most valuable symbol there is the monkey dragon which pays 500x for a win of five on a bet of 0.25. A triggering bet of £1.00 pays a sum of 2000x.

The firecrackers symbols pay 1600x for a winning bet of £1.00 and the drum pays 1200x. The peaches are worth 800x. All of these outcomes are for five symbol wins.

The remaining symbols on the paytable are the high cards, and these pay smaller amounts that range from 20x for three symbols to 200x for five of a kind. Each royal card symbol pays the same amount across the three levels.

Here is where this game is posed to give more compared to the rest of other slots of a similar theme by Pragmatic Play.

The wild symbol is represented by the lively money mouse. Not only does it pay 2000x for one pound winning bets, it also substitutes for all except the scatter.

That symbol is a money tree. Three of the same pays 1x on the bet and triggers five free spins. During this bonus game, the three middle reels spin colossal symbols. Each three scatters retrigger the spins.

In it only that symbol appears and has a cash prize attached to each one. When one or more of these symbols stop on the reels, the bonus is given another three respins.

The Money Mouse jackpot prize is won when the entire reel-set is filled with the red lantern symbol.

Pragmatic Play have allowed this slot to go out as a free play demo slot and it is available at online casinos that host slots in practice mode.

Three jackpots, a free spins bonus and colossal symbols. These are the features that make this game fun to play and potentially rewarding.