Play the Pirate Gold slot for a chance to land bags of gold with prizes in relation to the bet plus a lot more. The top symbol payout of £2500 is but on of the prizes on this Pragmatic Play installment of five reels, four rows and 40 always-active paylines. The game has a return to player outcome of above-average 96.50%, multipliers of up to 5x and a free spins bonus feature. Did we mention the three jackpot prizes? Sail away with the pirates by claiming one of the welcome bonuses on this page. 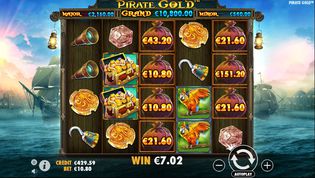 Pragmatic Play is one of those software development companies that know a way around slot games, and they have managed to keep it that way with their new and exciting Pirate Gold slots game. It is an ambitious game that has everything that you need in order to become one of the slots that will be a real hit among both new and more experienced online slot gamers. This review is all about that game and our slots experts here at SlotsWise have uncovered some sweet details about this new Pragmatic Play edition.

In here we will talk about a 5-reel, 4-row slot game with 40 paylines. It is safe to say that with the 40 paylines that the game includes, you will have more than enough winning possibilities. If you are particularly lucky, some might be massive.

The theme of Pirate Gold slots is pretty obvious from the name, and the graphics are quite impressive. There is a unique cartoonish touch which makes it more amusing for slot players.

The developers have made the game playable from all devices, so you could play it from practically anywhere you desire.

It is interesting to say that the least amount that you can stake in this game is from £0.40 to £200.00 per spin. This is a high volatile slot game which some players may find unsuitable.

The game has 10 standard symbols including bronze, silver and gold coins, a hook hand, a telescope, a treasure map, a ship and a parrot. The greatest reward comes from the male and female pirates, giving you x12.5 times your stake if you manage to land 5 of them on an active payline.

The gameplay of this online slot game is pretty straightforward and you won’t be facing any difficulties setting up the gameplay.

The first thing that you need to do in the game is to set the desired coin stake that you want to play with. After that, you just need to click on the “Spin” button and the game will start. So, as you can see, nothing difficult about this online slot.

The bonus features of a slot game provide you with additional winning opportunities as well as giving you the extra crumb of excitement that you look for in a slot game.

Also, Pirate Gold slots includes not just one but 3 fixed jackpots – Minor (x50), Major (x200) and the Grand Jackpot which gives you 1000 times your stake if you manage to land a whole reel set with money bag symbols.

A Word About the Developers

Even though most of Pragmatic’s games are slots this company has also developed a number of other games, such as scratch cards, table games, and video poker games. When it comes to slots, most of the games are modern video slots, but you can also play a range of classic slots. Some of the slots offered by Pragmatic Play feature progressive jackpot prizes.

Although there are a lot of pirate based slots out there from many slot developers, Pirate Gold slots is worth trying. Why? Because of the potentially massive jackpot prize that you could land while playing it.

It is worth mentioning that the graphics are also a nice addition and give you smooth gameplay and plenty of exciting wins.