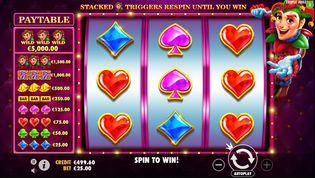 Experience the latest retro slot by Pragmatic Play - the Triple Jokers slot and play for a chance to win the £1500 jackpot.

Oh how do we love when a brand new retro slot hits the online casino shelves. We have a spanking new game by Pragmatic Play called Triple Jokers slot and it is a helluva thing for only three reels and five paylines. Unlike so many other retro slots, this one has bonus features, such as free spins, respins and stacking wilds, and that gives so much more to the players than just the simple grid of nine. As for the potential winnings, the triple wild brings out the cash prize, which is always tied to the bet, but when betting £5 the top prize is £1500 and the maximum possible cash prize is £25,000.

So what makes Triple Jokers slots such a promising game? It is the retro vibe that few companies are able to grasp for the ancient glory of Las Vegas and the era of retro slot machines. The slots experts at Pragmatic Play have decided to take a break from making another one of their amazing productions offering five reels and energetic gameplay and animation, and instead go for the simplicity of a five payline slot game with three reels and eight symbols.

Let’s then move on to presenting the gameplay details that will take any player, veteran or novice, into the world of retro slots that seem to be making a quiet comeback in the online casinos.

How to Play Triple Jokers Slot

Setting up for the gameplay takes just few clicks on the familiar Pragmatic Play gaming layout. The spin button is in the bottom right corner, underneath the reel set, and this is where the players can set the wager. The plus and the minus buttons do just that and there is a wide range of bets that can be made. The smallest bet is just £0.05 per line and the maximum possible bet per line is £0.50. This provides the players with many options, with the biggest bet reaching £25. Since the five paylines on this three reels slot are always active, there aren't any buttons for that setup, so the bet automatically works with the all active lines.

There are few other buttons that may come in useful during the gameplay. The Autoplay option is in the same area with the spin button. Clicking or tapping it will open up a box where the players can select the number of automatic spins and set a loss or win limit. As for that other button, it is the paytable, and it is represented by the 'i' icon in the bottom left corner, next to the audio toggle button. The paytable opens up the board where all of the symbol pays are displayed, as well as gameplay details and the game rules.

As for the game's symbols, these are all too familiar to the players. The retro look and feel is punctuated by the Liberty Bell symbol from the first even slot machine, the lucky seven symbol, the BAR, and the cards suits which are portrayed as gems. The last and most valuable symbol is the joker and there is no way of missing it because he is the Triple Jokers slot jackpot symbol.

How to Win Triple Jokers Slot

The game has some rather lucrative symbols when you land the same in three instances on a payline. But the bonus feature is one way of getting to a cash prize and this is how the Triple Jokers slot triggers it: whenever one or two stacked joker symbols appear, they will transform into the wild symbol and will trigger the Respin Until You Win feature. The feature has any of the landed jokers transform into the Wild, which substitutes for any.

The stack of jokers, now they are wild, will remain in place with the rest of the reels spinning until there is a winning combination. The feature can be retriggered, if another stack of jokers chances upon one or two of the reels.

The game's most valuable symbol is the joker and landing it on a payline in three instances pays £1500. The triple lucky sevens symbol pays £1000 for three, and the next symbol over in terms of value are the bells, which pay £500. These amounts are as such if the triggering bet is the highest, at £25 per spin.

The reels on the Triple Jokers slot are really something, being fully animated and speedy like the wind. The gameplay by that extension is engaging and quite entertaining, while the winnings are available at three symbols on a payline.

To play Triple Jokers start right on this page by claiming a welcome bonus to one of the casinos.