The game comes with five reels and four rows that spin across 1024 ways to win. The players will find an engaging mythological adventure that can create winnings on adjacent reels against a high variance potential and a theoretical return to player of 96.17%. Perhaps the most godlike feature of the game, amidst all the deities, is the maximum payout potential of 5288x multiplied by the winning bet. 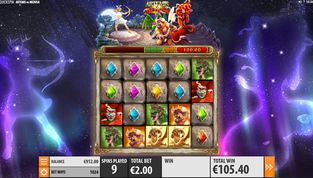 Quickspin have been quick to jump on an incipient trend of slots inspired by the mythological Medusa. In this game, the Swedish company is putting together an epic battle between villain and hero, or should we say heroine, because the antithesis to the Medusa is to be found in the goddess of the hunt and protector of youth, Artemis.

Artemis vs Medusa slot has a mysterious air about it. The symbols provide depth for a base game that comes with a wild and symbol collecting feature. Over to the extra features, we have a free spins bonus which is where the players may see the odds at winning bigger amounts improved. Nevertheless, this is an exciting Quickspin release and we shall keep an eye on it.

In terms of graphic design, the game has been given attention to detail so that all of the mythological beasts can come to life in a convincing manner. Every single symbol has been drawn and rendered quite well.

There are two symbol categories: high-paying mythological creatures and low-paying gems. In the former category are a griphin, minotaur, harpy, Artemis and the Medusa, while the latter category there are gems of different colors.

Artemis and Medusa slots has a set of visual effects that are quite out of the ordinary for this type of game. Symbols that are part of a winning outcome are given a gloss-over and some light and shading to accentuate the event, while the background becomes a stage for the celebratory dance of ghost-like figures.

How to Play Artemis vs Medusa Slot

Setting up for the gameplay requires first and foremost, setting up the amount of the bet. This can be done with ease by working the arrows that point up and dow, in order to arrive at the bet amount that is preferred for the ensuing spins.

In terms of the range of the bets, Quickspin have included what is their usual range, starting with 20p and ending with a maximum bet of £100.00. Regardless of what bet amount is selected to play with, Artemis vs Medusa slot will spin across the maximum 1024 ways to win.

As per the usual, the spin button on Quickspin games can be found in the bottom-right corner of the screen, shaped as an orange rectangle. To the left are two additional buttons - one is for fast spins, and is represented by the fast-forward symbol, while the other is for the autoplay.

The game can be enjoyed in autoplay mode. The players can choose from the available automatic spins presets and add optional controls that can ensure the balance doesn't go below a specific amount.

How to Win Artemis Vs Medusa Slots

Winning outcomes require at least three matching symbols that must start on the leftmost reel and extend on to the right on adjacent reels. Since this is a 1024 ways to win payout system, the symbols’ position on the rows does not matter, as long as they are of a matching kind and laid out without interruption.

The game has a wild symbol that can substitute for all other symbols and has a scatter that triggers the free spins bonus. The rocky platform above the reel-set is where the collected symbols are represented by their life-size (relative to the slot game) depiction of the respective deity or creature. This is possible when Artemis' symbol lands on the fifth reel and has a golden frame around it.

The game's only bonus feature is a battle between the main character and the beasts. They engage in battle when three scatter symbols have appeared on the reel-set on the same spin.

The number of free spins is not determined, as each spin causes one of the characters to deliver a blow on the other. The rounds end when one of two is defeated, which is pretty much the gist of the Artemis vs Medusa slot.

It is only a matter of time before Quickspin release this game as a free play demo, which is going to enable the players to try it with free credits and check out its features.

Discover the Artemis vs Medusa slots by claiming a welcome offer right from this page and play at top-rated online casinos.

Mount Olympus The Revenge of Medusa