Ghost Glyph starts as a grid of seven horizontal and seven vertical rows that can produce winning outcomes formed by clusters. The players can discover medium variance adventure whose theoretical return to player ought to be average of 96.18% or slightly more. The maximum payout potential is 2000x multiplied by the winning bet. 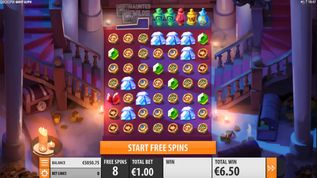 A game of ghosts and spooky events on the reels has been conjured up by the slots experts at Quickspin as a grid-based slot. The players will find a rather marvelously cute reel adventure  which involves cascading/avalanche wins on a grid that doesn't have a fixed number of rows.

Unlike another quite interesting release of the same theme, by Play'n GO, called Holiday Spirits slot that has three rows and three reels, Ghost Glyph comes with a towering reel set that can entail a lot of fun and potentially rewarding spins.

The players can have their go on this not so spooky adventure that involves smiling ghosts, gems of various colors and a set of features that can bring out the best of the mysterious. A wild symbol substitutes for standard-paying symbols and a reel modifier-collecting  feature can unleash onto the grid several vials filled with the good stuff. All in all, Ghost Glyph slot looks like a solid game by Quickspin.

The graphics designers and slots experts at the Swedish company have decided to go for a cheerful theme. The ghots that appear to hover above the grid are not of the haunting kind, they just want to help by offering wilds and symbol modifiers.

Ghost Glyph slots has symbols that can be divided in three categories: gems, tokens and extra symbols. The gems are  high-paying symbols, the tokens are coin-like symbols with various engravings, and there are the wilds and scatters.

Winning outcomes are marked with ghostly light around the cluster of symbols. In the event of a win avalanche, the symbols seem to evaporate into thin air in a cool manner. The audio is up to speed with the game and completely fits the theme.

How to Play Ghost Glyph Slot

Before you start playing the game you need to get familiar with the controls and buttons. These can be found at the bottom of the playing field and since it is a Quickspin production, Ghost Glyph has the familiar appearance and layout found across most of the games by this company.

To go at it right away, the play button is the big orange rectangle in the bottom right corner of the screen. Pressing that button once will send the reels spinning one time per the active bet, which is displayed in the other orange rectangle towards the middle of the controls bar.

To the left of Spin are two buttons: fast forward, which causes the grid to create and remove symbols quicker and the button for autoplay, which enables the players to select a number from the automatic spins presets and let Ghost Glyph slot play without having to make manual inputs.

Last but not least, the range of bets starts at 20p per spin for the minimum bet and 100 pounds for the maximum. You can arrive at any of the available betting amounts by pressing the down and up buttons.

How to Win Ghost Glyph Slot

Payouts can occur on any spin and must consist of at least five matching symbols. The biggest payouts are made with 15 or more symbols. When a winning outcome occurs those symbols are removed from the grid and replaced by a new set. The newly-landed symbols can trigger a winning outcome of their own, which is followed by a fresh set of symbols.

The four coins represent the low-paying symbols and these can pay between 0.25x to 15x multiplied by the bet. These values are regardless of the symbol kind, as they all have the same payout structure.

Over to the other category, the payouts can be between 0.50x and 600x multiplied by your bet. The most valuable symbol are the three diamonds and that huge payout is possible if 15 or more symbols land on the reels. 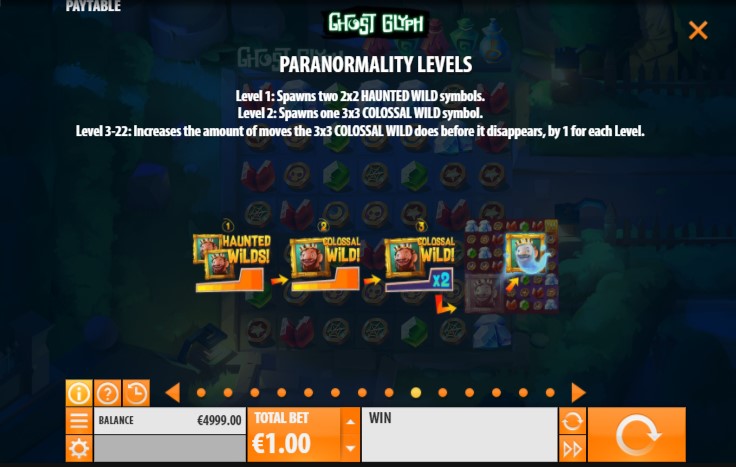 Each ghost represents one reel modifier. There are yellow, red, blue and green ghosts which cast their reel-modifying magic on the grid. The yellow ghost adds wilds, the red ghost removes certain symbols, the green ghost reshuffles the arrangement of the symbols and the blue ghost holds the key to bigger payouts.

A free spins bonus can occur with the help of the scatters, which is where the players can enter the feature with improved odds at winning cash prizes.

The game can be discovered by playing it in practice play mode at online casinos that host their slots in demo versions as well as in real-money play versions. Players can get unlimited free credits which don’t generate actual payouts, for the purpose of checking out Ghost Glyph and its features.

We like the sound of medium variance and all those reel, or should we say, grid modifiers. The maximum payout potential of 2000x is quite decent, and there are the avalanche wins outcomes that can potentially extend each wager.

Discover the Ghost Glyph slots by claiming a welcome offer right from this page and play at top-rated online casinos.