If you wanted to know what it’s like to be a monkey for a day, now it’s your chance. Introducing Loco the Monkey slot, a new slot release from Quickspin. It’s a five-reel, 50 payline game that comes with a jungle theme. The game comes with beautiful design, fun features, big payouts, and average RTP, so the fun is guaranteed. Meet Loco and join him in a new reel adventure where you’ll benefit from wild substitutions, re-spins, free spins, and more. Find out everything that this game has to offer in our detailed Loco the Monkey Slot Review. 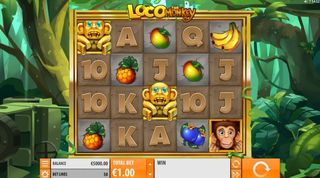 The new reel adventure from Quickspin will take you to the jungle where Loco (the monkey) lives. There, you’ll play on five reels, four rows, and 50 paylines, and spin for the chance to win prizes of up to 6,829x the stake. But, Loco isn’t the only monkey in the jungle. There’s also a golden monkey to meet. It will bring you the Free Spins feature! Overall, the game is filled with plenty of fun and entertainment, excellent features, and great payouts. So, read our Loco the Monkey Slot Review and find out more. And of course, if you like what you saw, feel free to play this game at one of the online casinos that we recommend to you on the right side of this page.

About Loco the Monkey Slot

There is a new monkey in town and it’s called Loco. It’s part of a new exciting adventure in a slot called Loco the Monkey, created by Quickspin. The gameplay of the Loco the Monkey slot is taking place in the jungle where the monkey lives. It’s full of exotic plants and clear air where you’ll get the opportunity to help Loco get the biggest prizes on the reels. This is a new online slot with five reels, four rows, and 50 active paylines. To win, you should land three or more matching symbols (or just 2 banana symbols) in a payline, starting from the leftmost reel.

In Loco the Monkey, you can start spinning the reels by placing your bet per spin which ranges from £0.20 to £100. This means that you have enough options to set your ideal bet according to your preferences. Just click on the up and down arrows below the reels until you have the bet per spin you want. No matter what bet you’ve chosen, all 50 paylines will be active. Therefore, you’ll always have 50 different options to land a winning combination.

This is an online slot that includes sticky wilds and multipliers, as well as free spins and re-spins. If you manage to trigger the game’s full potential, you can win prizes of up to 6,829x the stake in a single spin. So, if you play with the maximum bet per spin possible, you can end up winning more than £600,000 on only one spin, which is impressive. We’ll tell you more details about the bonus features below in our Loco the Monkey Slot Review.

Loco the Monkey is a jungle-themed slot where Loco is the main character. As usual, Quickspin has created a high-quality, bright and cheerful game with smooth gameplay. The reel set is placed in the jungle where Loco the Monkey lives. Therefore, you will find trees, snakes, and an overturned vehicle around the reels. It’s a simple and cartoonish design with quality graphics, so the game is friendly and pleasant to look at. In addition, the soundtrack adds plenty of fun and you’ll hear jolly sounds as well as occasional cries from the jungle animals.

Moving on to the paytable, the symbols are placed on stone blocks. There are low-paying symbols which are the 9, 10, J, Q, K, and A royals. Next on the paytable are the high-paying symbols that include tropical fruit symbols - pineapple, banana, mango, lime, and berries. The bunch of bananas is the top-paying symbol, paying 10x your stake if you land five on a payline. In addition, Loco is the wild symbol and appears on reels 2, 3, 4, and 5. In its basic form, Loco acts as a substitute for all regular symbols except for the scatter, But it is also used extensively during the bonus features.

RTP, Variance and Payouts for Loco the Monkey Slot

The RTP of the Loco the Monkey slot is 96.15%, which is about average. The variance is medium to high, where you can eventually succeed in winning huge prizes available from the increasing multipliers. Still, it tends to be more of a high variance than medium. As we’ve mentioned above, the game’s maximum win is set at 6,829x your stake per spin. So, if you’re playing with the maximum bet per spin possible, you can win more than £600.000, which is impressive. Here you can read more about the Variance, Volatility and RTP in online slots.

Gameplay and Features on Loco the Monkey Slot

Quickspin has packed the Loco the Monkey slot with two main bonus features - the More Monkeys! Respins Feature and the Monkey Frenzy! Free Spins Feature. In addition, the game has a wild symbol which appears to be one of the most important symbols in both the base game and the bonus features. Landing on the reels, the standard role of the wild is that it substitutes so it can be combined with regular symbols to form winning combinations. But, there is a second role given to the wild. Let’s find out more.

The golden monkey symbol is the game’s scatter symbol. When you land three scatter symbols on reels 1, 2, and 3, you will trigger the Monkey Frenzy! Free Spins feature. Then, you’ll receive 10 free spins. Any monkey wild symbol that lands during the free spins is locked in position for any free spins you have left. Plus, if a wild symbol lands on a position that has a locked wild, that wild will receive a multiplier boost. Each wild can have a multiplier of up to 3x. The Free Spins feature can be retriggered by landing three new scatters. In that case, you’ll receive additional 5 free spins.

Loco the Monkey Slot on Mobile

If you enjoy playing online slots on the go, you’ll be glad to know that you can play the Loco the Monkey slot on all mobile and tablet devices. The game is mobile-friendly so you’ll receive the same high-quality design and when you play it from a mobile device. The game is developed with HTML5 and can adjust to any small screen, on any operating system.

Quickspin is a well-known developer that makes impressive online slots. For example, one of the latest Quickspin releases to hit the market is the Big Bad Wolf: Christmas Special slot, a follow-up from its 2013 release Big Bad Wolf. Quickspin has decided to give us a Christmas Special version of its popular slot released seven years ago. Another popular game from Quickspin is the Hammer of Vulcan slot, a game with the potential to reward prizes of up to 20,000x your bet. Or, you can take a ride to the city of Tokyo and experience the luxury and the hot car cruise on Tokyo's sky highways in the Wild Chase: Tokyo Go slot.

All things considered, it looks like Quickspin had fun making the Loco the Monkey slot because the game surely appears to be a lot of fun. Besides that, the extra features and the maximum win potential is catching interest from both new and pro slot players out there. We’ve had a lot of fun testing and writing our Loco the Monkey Slot Review, so what about you?

Discover the Loco the Monkey slot by claiming a welcome offer right from this page and play at top-rated online casinos.