Experience a classical slots game that takes you on a ride through a city's main ocean drive. This is the Prime Zone slot by Quickspin, which has five reels, three rows and ten always active paylines. The top payout prize pays £500 on a bet of £5 and a lot more for those who dare bet bigger amounts towards the chance for a win. There are also up to x4 multipliers and a different volatility for the free spins bonus feature. 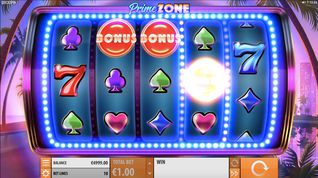 Quickspin are no strangers to exciting slots and when it comes to classical adventures on the reels, they have few picks that are notable for their entertaining gameplay.

This time around we get a new release titled Prime Zone slot which has been inspired, on the surface, by car rides on long summer nights.

On the other hand, the reel-set does remind of a gear-box, but the game itself is a pure Las Vegas classical slots adventure with the symbols that used to make the slot machines of old - bells, diamonds clubs and clovers, and the such.

When it comes to the potential for a big win, Prime Zone slot offers multipliers that can reach as high as x5, a bonus game which again, comes with multipliers, and a top symbol payout of x100 on the line win.  So as the coastal city's skyline moves like a reel past your shoulder, your joyride does have a chance to become enhanced by the shifting of this slot's gears, that is, multipliers.

How to Play Prime Zone Slot

To start shifting some gears, that is, reels, find the Spin button in the bottom right corner of the screen and press it. Pro players are well aware there is an easy way of doing it: autoplay. The autoplay button is to the left of the Spin. Click that button and a box of settings will appear where you can choose the number of automatic turns of the reels, from the preset numbers options. There is also the option to set a single win or a total loss limit, so that you mind your balance.

The Total Bet can be set from the corresponding window by using the up and down arrows. The smallest bet per spin starts at 0.10 £ and the biggest bet is £100.00 per spin. Each total bet amount comes by way of extrapolating the coin size over the game's always-active ten paylines. So, the 0.10 per spin equal one penny per all ten lines. And the bet of £100 means the line bet is £10.00.

The game's paytable is another thing that could be found useful in the Prime Zone slot. Access it from the menu button in the bottom left corner of the screen and at your disposal are the details regarding each symbol win, how the bonus feature is triggered, how the multipliers reflect on the winnings and during gameplay, and so on.

How to Win Prime Zone Slots

The mix of multipliers, the bonus features and the decent symbol wins all conspire for the possible return of a big win. Even when there isn't a big win, the bet amounts could be returned by a matching sum or in the region of.

According to the paytable, on a bet size of £5.00 per spin, a line win with five wild symbols returns the best possible outcome of all symbol wins during the base game. The prize is £500 for it, and £250 for the same number of the lucky red seven symbol and £200 for the blue seven symbol. The diamond can fetch £125.00 for five on a bet of £5.00.

The group of the cards' suits represents the lower-paying symbols of the Prime Zone slot, yet it is these that can sustain the player's balance.

The two features of the game are the Multiplier Wilds and the Prime Zone Bonus. The first instance of a bonus game appears on all five reels, that is, the wild symbol can fall on each of the reels and the multiplier-boosted wild can do the same.

The other bonus lets the players choose one of the four options for the Prime Zone free spins bonus. The bonus feature is triggered with three Bonus symbols landing on the three middle reels, which triggers seven free spins. This leads us to a second screen where we can choose the free spins bonus.

The four free spins categories unfold as such: In the first one, the Prize Zone is in reels one, two and three, which means the Wild symbol will land there with each spin. The multiplier is x1 but the wins are frequent.

In the second instance, the prime zone is in the middle three reels with all wins at x2 on a balanced variance.

The third prime zone gets the last three reels with the wild on each turn, a x3 multiplier on the wins, with a high variance.

The fourth is a mixed bag of the three. The players can get either one with each of the seven free spins.

The game's theoretical return to player outcome has been given an above average figure of 96.28%. This means the Prime Zone slot is above the industry average of 95.00%.

The game has been updated to fit on the mobile screen. The players can choose to take the game on the go either on android or apple mobile device, or tablet. If the online casino supports mobile gaming, Quickspin have all of their games optimized to be enjoyed on the go.

We have a decent classical if not retro slot game. The standard five reels and three rows are complemented by a decent free spins bonus, letting some control on the part of the player. Choosing the variance is equal to shifting a gear on a manual controlled car, and that’s the idea on this slot game.

Play Prime Zone at one of the online casinos on this page. Claim a welcome bonus to start your adventure today.