Crystal Rift is the latest Rabcat online slot, available at a range of SlotsWise casinos. Register with one of our featured partners and play Crystal Rift and a number of other online slots. 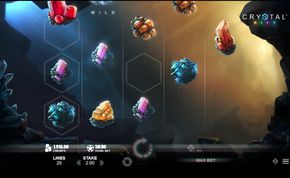 Online slot providers are always trying to stay on top of things and develop new and exciting games that will catch players’ attention. Crystal Rift slot is one of Rabcat’s latest releases, a game that looks really impressive.

Rabcatmay not be one of the most renowned online slot developers, but the Austrian-based company has definitely created some pretty exciting games over the years, including Castle Builders. Rabcat work closely with Microgaming, in fact, many consider Rabcat to be part of the Microgaming group, and while their games are available exclusively via the Quickfire platform, we have a strong reason to consider Rabcat a separate provider.

Let’s get back to Crystal Rift slot. The visual aesthetics are really on a whole new level here, although that’s not surprising at all, considering that most other Rabcat games are quite refined when it comes to graphics.

There outline is five by three, but the symbols don’t spin as it’s usually the case on video slots, instead you can see them falling onto the reels. As it is quite obvious from the game title, the symbols are crystals in different colours and forms. The game features a Bonus Falls feature and a Wild Grid feature. When a winning combination is formed the symbols that participated in it disappear and new ones appear on the reels.

The music and sound effects match the game theme and complete the whole atmosphere. In the background you will see a somewhat abstract setting, displaying rocks with dimmed sunlight.

How To Play Crystal Rift

The game comes with 25 paylines, and they are all active at all times, during every spin. In order to play Crystal Rift slot you should set a wager. The minimum amount that you can wager is one penny per line which amounts to 25p per spin. The maximum stake per line is £2 which sets the overall stake at £50.

The maximum amount that can be won is 2,000 coins. By increasing your stake per line, the potential winnings are also increased, but if you like to wager the maximum possible amount you can just click the ‘Max Bet’ button and your stake will be increased to £50 right away.

Your stake per spin is displayed right of the spin button and your total bankroll is shown on the left, below the leftmost reel.

How To Win Crystal Rift Slots

We already mentioned that this game features 25 paylines, and you will need a minimum of three instances of the same symbol across a payline to trigger a win. The combination has to be arranged from the leftmost towards the rightmost reel, otherwise a win won’t be triggered.

Although all symbols are crystals, they are not equal when it comes to winning amounts. You will win twice your wager per line if you get three purple crystals on a payline, but if you manage to get four purple crystals you will win an amount four times your stake per line.

How let’s say a bit more about each of the Crystal Rift slot bonus features.

As we mentioned, whenever you get a winning combination, the symbols that were part of it disappear, causing the remaining symbols to rearrange, with new ones falling onto the reels. All additional wins that could potentially be triggered are also paid out, so in a way, you get a chance to win more than once with a single stake.

If you manage to win three times in a row with the same stake, the Wild Grid feature will be triggered. When the game begins, a wild grid is selected completely randomly. The positions that are indicated are the ones that are part of the wild grid. If three winning combinations in a row occur, the pre-selected Wild Grid will be activated. This feature can also be retriggered if you get three more consecutive wins.

We should also mentioned that there are four different types of Wild Grid patterns:

Crystal Rift slot is one exciting and unique game and exactly what one should expect from a Rabcat slot. It is easy to see this game as one of the players’ favourites in the upcoming period.

If you’re looking to try out Crystal Rift and a number of other exciting slots, register with one of our partners, claim your bonus and start playing today!