RTG are taking things to the loony department with a game that has a 3000x on the winning bet based on cluster wins of four or more symbols. The game has multipliers of up to 6x on consecutive wins that can result from the same spin. 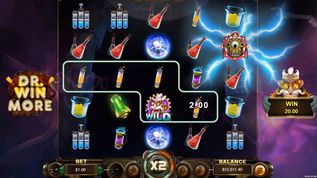 One loony doctor is a genius too for inventing a machine that zaps into existence the symbols that can create winning outcomes on the Dr. Winmore slot.

Those who decide to get on this online slot are taken straight to the doctor's lab where a grid-based layout of five horizontal and five vertical rows can lead to a maximum payout of 3000x multiplied by the winning bet.

Dr. Winmore comes from the slots kitchen of Realtime Gaming, a company known for releasing many popular games, such as the jackpot Diamond Fiesta slot. But the game at hand is different. Instead of wins made of paylines it turns up cluster wins of four or more symbols.

The win outcomes are subtracted from the grid and the empty places filled by a new drop of symbols. In this manner, lucky players can enjoy multiple successive wins that have resulted from the same spin. Moreover, there are multipliers of up to 6x on the winning bet, which is a great way to get a boost towards the big win.

Reeltime Gaming have made an engaging game with the cluster pays, which put up a moving show when they cluster up in four or more symbols. In the event, the symbols whizz, crackle as pop, causing Dr. Winmore to flash a grin on his his face.

Dr. Winmore slots has a lot of moving parts that turn up with the symbol wins, but there is also stuff going on in the background and left and right of the reels. Needless to say, Reeltime Gaming are masters of their craft and they have thrown in a cool sound score that gives the gameplay an additional level of fun.

How to Play Dr. Winmore Slot

Setting up for the gameplay requires selecting the bet from the bottom left corner. It's best to scope out the active bet because the casino's default may not be an amount that you'd play on your first spin.

Once you have set the bet you are welcome to play the Spin button, which is found in the bottom of the reel-set, just underneath the third reel. The bets range between ten pennies and £25.00 per spin for the maximum bet.

You can engage the Dr. Winmore slot hands-free by selecting the small round button which is to the right of the spin button. When you press it a menu with automatic spins presets opens up from where you select one and the game goes underway.

When you toggle on the thunder button which is another look to the right, the symbols on the reels drop faster. The menu button is in the bottom right corner, next to the Balance display. This is where you can view the paytable, game rules and other details regarding the game.

How to Win Dr. Winmore Slots

Win outcomes can post on the grid with any given push of the spin button. You need four symbols for the minimum payout that relates to the specific symbol kind.

The wild symbol is Dr. Winmore himself and substitutes for any of the paying symbols. The non paying symbols are reel-modifiers which can turn up to boost the chances for a win outcome.

In terms of symbol payouts, the most valuable on the Dr. Winmore slot is the blue orb. Eight of the same bring a win of 500x. Seven payu 125x, six pay 60x and so on. Next in terms of value is the green cylinder contraption, which pays 300x for eight.

There are four symbols that are reel modifiers. These are the robots that Dr. Winmore so ardently works on inside his lab.

Free Spins are not one of the bonus features, but instead, the cascading wins do the job of increasing the odds for a big win. With each consecutive win that continues following the first one a multiplier is added to the coming win.

The maximum multiplier is x6 on that particular win. Leading up to the buildup are multipliers of x2, x3, x4 and x5.

The slots experts at RTG have released their online slot at a number of casinos that host free play demo slots, which are in front of the paywall. That way players can try the game and then go on to make the deposit and play with real money.

With a maximum payout of 3000x which can result from a single spin and many subsequent cascading wins on the x6 multiplier, the game has a promising payout potential. The reel modifiers help out by making room for new symbols, which is another way of improving the chance for a win outcome. Overall, it is a fun game to play, although it isn’t the only in this category.

Discover the Dr. Winmore slots by claiming a welcome offer right from this page and play at top rated online casinos