Discover the jurrasic world on the T-Rex 2 slot by Reeltime Gaming. Three rows and five reels spin across 25 paylines, which are selectable. The range of bets isn't immensely great, and the game delivers many free spins with five scatters. Wild wins are doubled and there is a progressive jackpot - joined by 50,000x max win.

Play the T-REX 2 slots for a chance to win up to 50,000x on the line bet and or a progressive jackpot prize.

Dinosaurs were stunning creatures  that we are never going to be able to experience from up close. 3D doesn't quite cut it and mechanical dynos are laughable. Maybe if they invent a time machine, or they clone one. In the meantime the T-REX 2 slot does well to bring on an exciting time on the reels with one of the mightiest specimens of that era.

This is an in-game progressive jackpot a reel-set of three rows and five reels which spin across 25 always active paylines. Wins are made with three matching symbols which must fall from left to right on the reels. T-REX 2 has a bonus feature that activates free spins in which the wild can be contagious and create wilds out of regular symbols. 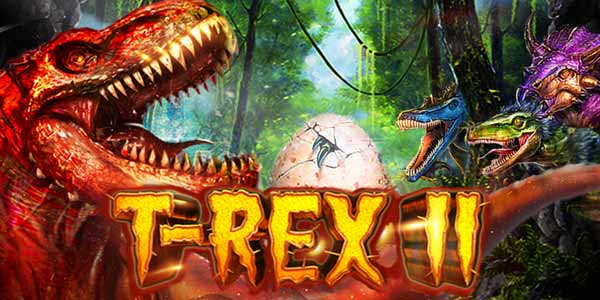 Produced by the slots experts at RealTime Gaming (RTG), this is a game that offers stunning graphics and an engaging gameplay. What is more, symbol wins for the high-paying category include three prizes of 1000x and above multiplied by the line bet.

T-Rex 2 can trigger as many as 100 free spins in the optimal outcome with the scatter symbols. In the event, the wild symbol is active and does more than just replace th game's standard symbols. Those who get on this online slot will find out that this feature could make the difference between regular and big wins relative to the bet.

The players will find some rather stunning drawings of the lot of dinosaurs that inhabit the reel-set. Even the card symbols have been given an aura of Jurassic-era vegetation.

Behind the reel-set is a backdrop of rocks and ancient ferns. None of the symbols are animated on the reel set, however they do get treated to a modest light show that exclamates the winning outcomes. The T-Rex snarls and snaps his jaws ready to devour anything in its path.

As for the musical element to it, T-REX 2 slots has an epic symphonic score that fits well into the game dynamics.

How to Play T-REX 2 Slot

The players can start their adventure by pressing the spin button in the bottom of the reels. Just underneath the third reel press the round button to send the reels spinning once.

T-REX 2 slot has an autoplay button to the right of the play. This lets the players choose an automatic spins mode with a number of additional stops and options. To the right of this button is the lightning sybol, which causes the reels to turn faster.

Before you press Spin make sure that you select a total bet that you prefer to play with. This can be done by selecting the Bet Per Line value and the number of active paylines, from a total of 25.

The smallest Bet Per Line value is £0.01 and the biggest value in this regard is £2.50. The biggest bet in the game is £62.25 per spin. To the right of these settings is the Total Bet display and on the opposite end of the screen is the available balance.

How to Win T-REX 2 Slots

The paytable is a source of information that displays the symbol wins and bonus feature information. Three or more symbols on a line fire up the payout and there can be more than a single payout resulting from one spin.

T-REX 2 slots wild symbol is the T-Rex. It appears on the first reel, which means, the possibility for leftmost reel wins start with the wild is there. The rex substitutes for any, except the eggs, which are the scatter symbol.

The bonus feature is triggered by three or more eggs. The scatter wins are multiplied by the total bet instead of the line bet, as it is the case with the rest of the symbols. What is more, the T-Rex wild is active in the free spins and it still substitutes for the symbols and adds a double on the wins.

This game has a huge potential payout which can be triggered at random following any given spin.

On the other hand, the maximum win resulting from a single spin is 50,000x multiplied by the winning payline bets.

ReelTime Gaming have released this slot as a free play demo, which allows players to test this great game before deciding to play with real money.

We have an in-game progressive slot and a 50,000x maximum payout which can result from a single spin, and most likely one which triggers the free spins with the most iterations. The wild symbol converts other dinosaur symbols into wilds, helping for the win outcomes.

Claim a welcome offer from this page and discover T-REX 2 slots at top rated online casinos.