Discover Mata Hari: The Spy slot and play for a chance to win heavy-valued symbol wins on 80 paylines and six reels. Wins are made with three or more symbols on the line, and the most valuable payout is 100x on the bet win. There are three, and more, bonus games and extras which can elevate the chances for a big win.

Be in the company of spies and big shots during the WW1 saga called Mata Hari: The Spy slot.

Perhaps Mata Hari's spycraft wasn't quite on the level of Austin Powers but her belly dancing was supposedly unmatched the world over. Her life wasn't rosy, but her legacy is part of popular culture today, and building on that legacy we have a slot game in her name.

Mata Hari: The Spy slot was made by the slots experts at Red Rake gaming. It features bonuses and extras that can help towards the potential big win . The Spies' Roulette can lead to wins of up to 100x multiplied by the bet, and there are features called Raining Veils and Mata Hari's Eyes. The free spins bonus can turn up as many as 144 bonus rounds.

In terms of the arrangement of the reel-set, the game offers a six by six grid, however the game isn't cluster pays. Winning outcomes are made with three or more symbols of the same kind falling from the leftmost reel and on to the right. Besides substituting for all the symbols, except the bonuses, the Wild also pays a handsome amount at 100x on the winning bet.

Red Rake have built numerous slots machines for the land-based casino industry and have replicated many in online slots releases. This game may have been on the casino floor before it was released as online slot. At any rate, the layout and the design 'smell' of casinos. as do the potential wins and the 80 paylines on the grid of 6x6. 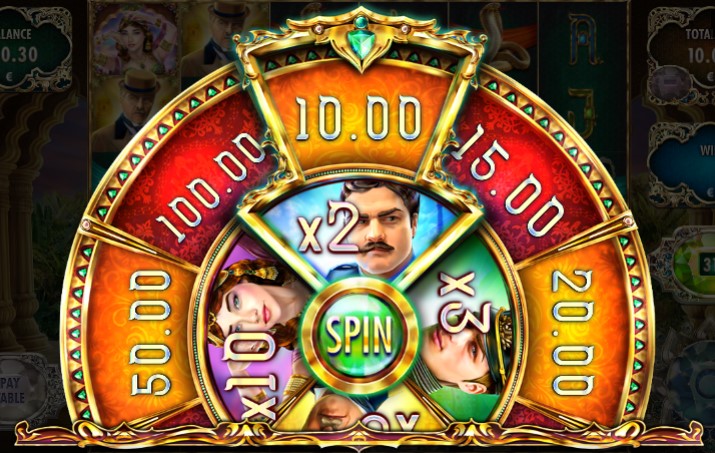 Design-wise the imagery echoes Mata Hari's time, so we aren't surprised to see that most of the high-paying symbols are portraits of the men she'd encountered in her life, such as General MacLeod, the Prussian kaiser, a French agent and the Russian pilot Maslov. The rest of the symbols in Mata Hari: The Spy slots are diamond-inspired cards suits.

The musical theme is a full cinematic score with background, hence our believe it was a land casino slot.

How to Play Mata Hari: The Spy Slot

When setting up the game you'll need to rub your eyes well, because you'll be looking at a lot of diamonds on the screen.

In the top right corner is the setting for the Total Bet. Use the minus and plus buttons to select an amount that works with your balance and style of play

The minimum stake on the Mata Hari: The Spy slot is £0.16 per spin, while on the other end there is a top bet of £60.00.  This isn't a huge range and it indeed helps with the potential wins that the payouts aren't counted on per-line-bet basis.

Your reel adventure on this slot can begin with the push of the spin button which is a blue sapphire in the bottom right corner of the screen. Above it is an emerald that lights up the autoplay option.

The automatic spins are selected from a list of presets, however Mata Hari: The Spy slot doesn't have any optional stops, such as stop on a single win, so it's best to be mindful of the balance.

How to Win Mata Hari: The Spy Slots

Like we said, the game has six reels and that offers maximum payouts of six matching symbols. The most valuable symbol in the game is the Wild, a hypnotic background of blue electricity, which pays 100x on the winning bet, or in absolute terms (before any kickers and bonuses), wins of £6000.00 on the max bet.

50x on the winning bet is paid by the Mata HAri symbol which can come expanded on the reels. The rest of the symbols assume a more familiar pattern, with Maslov the pilot paying 12.5x on the win as do the rest of the men in the life of the dancer turned spy.

Besides these there are symbols of a king cobra, a crown and the symbol of the dancing ganesha inside a wheel and the high cards for the low paying symbols.

The game's scatter symbol is represented by a pink ruby with that lettering. This is a bonus trigger, as well as scatter win paying symbol, with 50x on the winning bet in full if a win of eight of these occurs.

A random feature are the Raining Veils which can fall over a number of reels and reveal symbols with a random multiplier, up to x4 on the win.

Then there is The Spies' Roulette bonus which is triggered by four roulette symbols. In the event a wheel of fortune appears where its two levels display multipliers and money amounts relative to the bet

The final outcome is a prize that is a multiplier of the two values that stop on the wedge.

If Mata Hari's eyes appear on the reels Mata Hari: The Spy slot throws in spotlights that can expand symbols to cover 2x2 or 3x3 on the grid.

Red Rake are priming this game for the world by offering it as a free play demo. This lets the distinguishing players try and look beyond the theme and into the possibilities.

The game wins on all fronts thanks to the ample bonus events. Whether these trigger and after how many spins is a matter to be discovered by the lucky players out there, but one is sure, the potential pay amounts are quite healthy.

Claim a welcome offer from this page and discover Mata Hari: The Spy slots at top rated online casinos.