Super 15 Stars comes with three rows and five reels that spin across 30 always-active paylines. Bets start at 30p per spin and the maximum payout potential is 1000x, with one of the instant jackpots paying 300x multiplied by the winning bet. Furthermore, Super 15 Stars has a low to medium variance and a theoretical Return to Player of 95.30%. 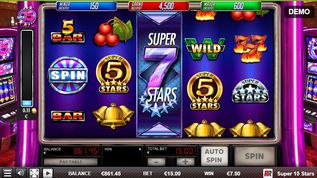 Red Rake Gaming is the company behind a fruit and Las Vegas themed slot that takes the players to a lush casino floor for a chance to win up to 1000x. The game has a retro feel to it and will be found appealing by players who are into time travel back to the height of Vegas life. Besides base game excitement the Super 15 Stars slot comes with three instant jackpots.

The game comes as part of a trend in retro and fruit themed slots in 2020. Most major developers in the world of online slots are jumping on the bandwagon and there are some amazing productions. Super 15 Stars looks interesting, to say the least. The fruit symbols are familiar and the low to medium variance should be interesting to witness on the reels.

The game has a Red Rake look and feel to it, even though the theme reflects the general appearance of a Las Vegas casino floor. The background is precisely that and the Super 15 Stars slots represents one of the slots machines on the floor.

When it comes to the audio-visual elements, the game holds no surprises. Symbols have a 2D appearance and the sound is the ambiance of the casino. The winning outcomes are made known with analog sound exclamations and TV game-show sound effects.

Super 15 Stars can make a number of transitions that result in brief visual effect but isn't anything special. It is possible that the gmae was made precisely for the casino floor, so it should appear quite amazing on a video sreen, but it definitely plays seamlessly both o mobile and personal computer.

How to Play Super 15 Stars Slot

The game can begin with the push of the Spin button, which is a white rectangle located in the bottom right corner of the screen. In fact, Red Rake have inserted all of the buttons and controls at the bottom of the screen. In this regard, this part of the slot appears quite uniform and it is easy to navigate.

To the left of Spin is the Auto Spin button, which opens up a list of number presets that are automatic spins. Selecting one of these will promptSuper 15 Stars slot to spin the reels on its own. This is certainly one way to play the game, just one caveat in this regard would be to select a bet amount that reflects your balance and style of play.

But before making the first spin on the game it is best to choose your bet instead of playing with whatever has been set as the casino's default. The minus and plus buttons allow you to scroll through the bet amounts. The minimum bet is 30p per spin and the high-stakes bets start with £15.00. Super 15 Stars has a maximum bet of £60.00 per spin.

How to Win Super 15 Stars Slots

The game makes winning payouts with three matching symbols. Winning outcomes must start on the leftmost reel and optimal wins are made with five matching symbols, but there is always the possibility that Super 15 Stars slot can turn up a win consisting of more than one payline.

There is a wild symbol that is part of the game and it naturally substitutes for any of the symbols, except for the bonus symbols. In terms of payouts, the most valuable symbol is the wild, paying 33.33x multiplied by the winning bet.

There is a string of hot sevens symbols which include a triple, double and single symbol. These can pay 16.66x, 8.33x and 6.66x multiplied by the winning bet for five matching symbols. A combination of the sevens on fire symbols, any of the previous three symbols, can also pay a cash prize, albeit quite negligible at 2x for five symbols

When it comes to the bonus features the game packs quite a number of extras. First off, there is the Super 15 Progress Bar where non-winning spins add to a meter which triggers the Stars Fusion Minigame when it's been filled to the max.

The game stars with three spins and seven of the super 15 symbols.that place on the reels in random locations. Additional symbols  of the same kind can stop on the reels and reset the number of respins back to three. Essentially this is the Hold and Win game that appears on many slots nowadays.

With the help of the stars symbols the game paints different patterns of stars. The most valuable of these pays 666.66x multiplied by the bet.

The remaining bonus symbols that can appear in the base game and extra features include two cash-paying scatter symbols and a free spins scatter that can trigger up to 20 free spins.

The game is available as a free play demo slot, enabling players to try it out and decide if it’s the game to play next.

This is one of the Hold and Win bonus games which means there are instant jackpots, but base game wins with the standard symbols are expectedly unappetising. On the other hand, there are two scatter symbols that do pay decent cash prizes and a free spins bonus that comes with improved odds for wins.

Discover the Super 15 Stars slots by claiming a welcome offer right from this page and play at top-rated online casinos.