If you’re into Chinese mythology, then you are definitely familiar with the legend of a powerful Bengal tiger and a fierce dragon that guard a valuable treasure. That particular legend is the theme of Tiger and Dragon slot from the studios of Red Rake Gaming which is also behind the excellent Bonnie and Clyde slot. Tiger and Dragon is a highly volatile game that comes with symbol blockers, cascading reels. A roulette-like bonus game and a free spins bonus round. Playable from between 0.20 and 35.00, you have a shot at the maximum win potential of 20,000x your stake.

If you're not into Chinese-themed online slots, try spinning the reels of such games as Double Bubble slots, Secrets of the Phoenix slots or other similar slots.

When you launch the game, you are presented with the large reel set of Tiger and Dragon slot which has six reels in ten rows. It is placed against a background representing the Great Wall of China with the game buttons on the right side of the screen and the free spins and bonus display boxes on the left.

The three reels of Triple Dragon slot are decked with low-value and high-value symbols which allpay outfor combinations of three, four, five and six identical symbols.

The group of low-value symbols includes the six playing card symbols 9, 10, J, Q, K and A. The high-value symbols in the game are three theme-related symbols, Chinese symbols placed against a triangle, a circle and a diamond and a couple of tiger and dragon symbols.

The special symbol in Tiger and Dragon include a wild, which substitutes all symbols except for the bonus symbol. The bonus symbol activates an additional element of the panel in the game.

How To Play Tiger And Dragon Slot

Since there are no standardpaylinesin Tiger and Dragon, all you need to do before pressing the spin button in the bottom right corner of the screen is to set your total bet for the spin. If you want to increase your total bet, press the plus button of the Total Bet box or press the minus button to decrease it.

Once you have decided on your total bet for the spin, press the ruby SPIN button in the bottom right corner of the screen and the reels will start spinning hopefully landing a winning combination.

If you want to enjoy the gameplay of Tiger and Dragon slot without pressing the spin button after each round, you can use the AUTO SPIN option. When you click this button, a menu opens holding five options for the rounds to be played automatically – 5, 10, 20, 50 and 100. As soon as you select a number, the reels start spinning, so make sure to set your total bet for the spin beforehand.

How To Win Tiger and Dragon Slot 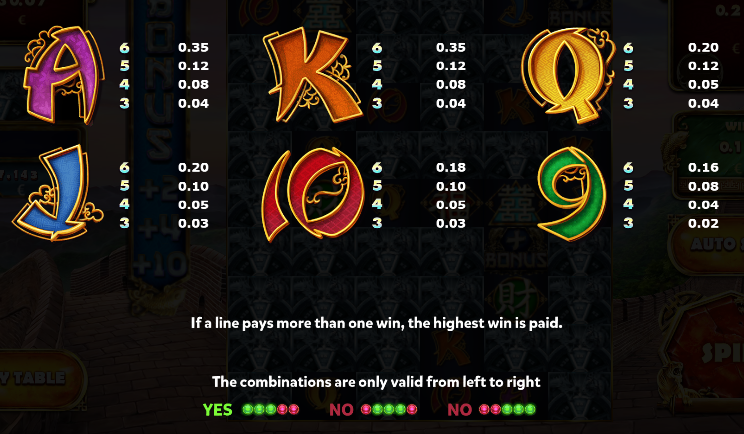 The free spins feature in Tiger and Dragon slot is triggered by landing five or more consecutive respins in the same spin or by landing bonus scatters.

On the left of the reels, there’s a vertical window displaying “BONUS” and +2, +4 and +10. To start the free spins round, you need to illuminate minimum the word characters as described above. One winning cascade or a bonus scatter will illuminate one character for each occurrence and if you land both, two characters will be illuminated.

Once you complete the word BONUS, you will get 10 free spins with a starting win multiplier. If you land six, seven or eight consecutive winning cascades or bonus scatters, you will get +2, +4 and +10 free spins, respectively, for a maximum total of 26 free spins.

Symbol blockers in Tiger and Dragon that appear on the reels on a losing spin contribute to this bonus game. The number of blocker symbols is shown in a display on the left of the reel set. The progress bar needs to be at 100% to trigger the mini-game. 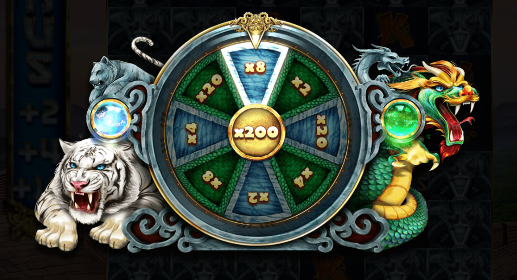 A second screen appears with a mini roulette wheel with eight segments, each assigned a multiplier between x2 and x20. The segments are equally divided between the tiger and the dragon.

You need to pick on of the animals and spin the wheel. If it stops on the selected animal, the landed multiplier will be added up and another spin awarded. You can get up to 100 spins and expect wins between 50x to 2,000x your bet.

Our Tiger and Dragon Slot Review

With the one million ways game engine in Tiger and Dragon, it seems that Red Rake Gaming has succeeded in surpassing the popular Megaways slots and taken the game to another level. So, if you are into Chinese-themed online slots with lots of ways to win, then don’t hesitate to try Tiger and Dragon.

So, choose your welcome package from the online casinos promoted here at Slotswise and spin for the chance to win excellent real money rewards on Tiger and Dragon slot!

Legend of the Four Beasts