The players will find a game that's been inspired by movies like The Godfather, as it is complete with a mafia-inspired premise and symbols. The reel set comes with three rows, five reels and 10 fixed paylines. These can result in wins that are not part of the jackpot tiers, that can get as high as 100x bet. The theoretical return to player (RTP) of 5 Families is 95.71% and the variance is medium. 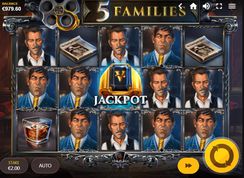 The game has nothing to do with five families going together on a vacation, but more to do with the capos of five independent crime syndicates who happen to be partners for the sake of protection and profits. 5 Families slot is part of the Red Tiger Gaming jackpot series where specific games have three tiers of instant prizes: Daily Drop, Must Drop and Mega Drop which can drop on any spin. In addition to that, the game comes with its own in-game prizes.

It's quite interesting that the game comes with ten paylines and pays according to the way that is typical for its layout, yet the bonus game is triggered by a number of consecutive wins. The player needs to be ready to play a game that doesn't have a wild symbol, nor a scatter, which means less clutter on the reels and one amazing bonus game.

In terms of graphic design, Red Tiger Gaming has created a number of picture symbols that are split in the two standard categories - low-paying and high-paying symbols. Even though the premise of the game is a mafia family poker game, there is no room for the cards' symbols on the reels, so each symbol fits the story about mafia-related events and the things that the gumbas do.

5 Families slots has had its symbols drawn exceptionally well, so much so that it looks like the design team at Red Tiger Gaming has had a ball with the stereotypes. the personalities appear quite charming, that is, before they've decided they've had it with one of theirs and then given him the kiss of death.

Each symbol is animated when part of a winning outcome and there is a speakeasy piano tune with a bass guitar as background music. Overall, it's a game that entertains besides having the potential to pay.

How to Play 5 Families Slot

Playing the game requires finding your way around the reel set. That's at least true for those players who haven't played a Red Tiger Gaming slot before. So, the controls can be found below the reel set and there are few other buttons in the top-right corner.

Before you make the first move in this lovely mafia poker game, it's best to scope out the default bet. That amount is shown in the bottom left corner where it says Stake. To change it, simply press that button and choose one of the available bets. These range between 10p, which is usual for Red Tiger and £500.00 which is extremely unusual, but is this a high-stakes mafia poker game or what?

5 Families slot has a fast-forward button that enables the reels to spin and stop faster than the usual. To bring the spins back to the good old, slow, way press the same button to untoggle it. One way to play 5 Families is by selecting the autoplay mode.

Press the Auto button to open up the menu and from there, you can select the number of automatic spins, add the spending limit, and go to the advanced menu in order to add a couple more optional controls, such as Stop on Bonus Feature and Stop on a single win amount.

How to Win 5 Families Slots

Winning in the game requires at least three matching symbols to land on a payline. Winning outcomes where there are multiple payline wins are also possible. We mentioned that 5 Families slot doesn't have a wild symbol so all winning outcomes must be paid for symbols that match and start on the leftmost reel.

There are two payout schedules in this game. One is for the base game and the other for the bonus feature. The main difference is that base game wins pay amounts that are lower. For example, the top-paying symbol pays 20x for five of a kind; the one that’s next in line pays 15x and so on. But, wins in the bonus game are paid 5x for each one.

The bonus game is triggered with five consecutive wins, for a chance to enter the VIP room and get multipliers of 5x on each win.

In terms of value, the symbols in the bonus can pay excellent amounts. The main don's symbol, the person dressed in white, pays 10x for three symbols, 30x for four and 100x for five of a kind on a payline. The paytable has the man in a fine suit and golden tie as the next most-valuable symbol, where five of a kind pay 75x multiplied by the winning bet.

In the low-paying category, the symbols are a newspaper with a gun on top, a glass of whiskey, poker chips and cash, and a suitcase filled with banknotes. These symbols pay between 1x and 2.5 multiplied by the bet.

The improved paytable that’s active in the bonus is valid as long as there is a win between every five spins. Five non-winning spins in a row and you are back at the regular poker table, that is, paytable.
5 Families Free Play

The game can be found and played as a free play demo at online casinos that host their slots in practice play mode.

Red Tiger have approached this game from another angle. We welcome the idea. Overall, it is a simple game with payouts that are alright, but one lucky string of five wins in a row and your next wins get a 5x. Sounds like a great deal.

Claim a welcome offer from this page and discover 5 Families slots at top rated online casinos.