Cash Volt is a classical slots machine-theme slot that comes with five reels, three rows and 20 paylines. Winning outcomes are produced with at least three matching symbols across the paylines. The volatility sits on medium, against the possibility to trigger the highest win potential of 2500x multiplied by the winning bet. The theoretical return to player on Cash Volt is 92.05%. This is one of the few recent Red Tiger Gaming releases that carries instant-win jackpot prizes. Check out the FAQs at the bottom for more detail. 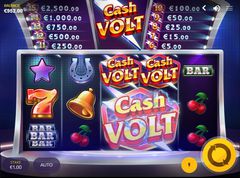 A classical slot game that is heavy on the BAR symbols was made by Red Tiger Gaming. Looks a tad unusual with its five reels and all retro symbols, but does it offer more than just the looks? With a title like Cash Volt slot, the emphasis is on that symbol, which can stack up high and canvass the entire reel-set for prizes that are worth bragging about.

The game is all about the base game, as there is nothing else on it. There is no need for a paytable because the standard symbols pay amounts that pale in comparison to the Cash Volt symbol. Because the focus is on that, the slots experts at Red Tiger Gaming have allowed the random number generator to throw on that symbol in multiple positions on the reel-set, also across entire reels.

In terms of the graphic design the game comes with a good sense of vintage slots making. The silver-plated frame around the reels echoes the heyday of Vegas when all slots machines were exactly that - mechanical machines equipped with a lever, a drum and sets of symbols that didn't depart from the fruits, bells, stars, sevens and BARS.

Cash Volt slots responds to that look and feel quite masterfully. The only 'odd' symbol on the reels is the title-giving symbol crossed by a thunder symbol. In terms of visual effects, these are toned down in the event of a payout, but the lightning and thunder is ubiquitous with every spinning of the reels, as the visual effect appears on each and every reel that gives a hint of the Volt symbol.

How to Play Cash Volt Slot

Red Tiger Gaming are staying true to their form with this game, as they do with nearly all standard reel-set slots. The spin button is a big, yellow and round object that stands apart from everything else. Located in the bottom-right corner of the screen, pressing it casuses the reels to turn one time per the active stake.

To find out how much you are betting per spin locate the Stake button in the bottom left corner. The amount of the bet is shown right there, while pressing that button opens up a menu where the players can choose from the available bet amounts. In that regard, Cash Volt slot has a smallest bet of 10p and a maximum bet of £100.00, with multiple options between those two numbers.

One way to play the game is by selecting the Auto button. This opens up the menu where you can choose to turn on the automatic spins. Pressing the More Autoplay Settings button opens up to two additional controls: 'Stop on win above' and 'Stop on bonus feature'. Press the yellow Start button to start playing.

How to Win Cash Volt Slots

Winning at the game requires at least three matching symbols on a payline. Optimal wins are made with five of a kind and there can be more than a single payline win that results from the same spin.

Cash Volt slot doesn't have a wild symbol, nor a scatter, which reflects the retro look and feel of the game. In terms of payouts, the most valuable symbol on the paytable is the hot red seven, which pays 300x multiplied by the payline bet for five matching symbols.

The game doesn't have any extra plays, reel modifiers or multipliers. It is a very basic game in that regard with the only difference being made by the Cash Volt slot symbol. This symbol tends to appear in stacks and in more than few locations on the reel-set.

The symbol makes cash payouts starting with six on the reels. The paytable for wins with Cash Volt is above the reels, so it is clear what the payout potential is. 15 symbols, which is the entire reel-set getting filled by that symbol, pays a prize of 2500x.

The game has been made available by Red Tiger Gaming as a free play demo slot, which enables players to try it for free.

There really isn’t much more to add about the game. It all rests on the game’s whim regarding the Volt symbol. Base game symbols can make decent payouts with five of a kind, and there isn’t a wild to substitute. So, it’s all about getting five or more Volt symbols.

Discover the Cash Volt slots by claiming a welcome offer right from this page and play at top-rated online casinos.

Does Cash Volt have a high RTP?

The theoretical Return to Player outcome on this game is lower than the average because the game has instant-win jackpot prizes.

Are there other Red Tiger Gaming slots with instant jackpots?