Spot a lucky tiger and walk away with a pot of gold from the beautiful Chinese Wilds slot with five reels, four rows and 720 ways to win. 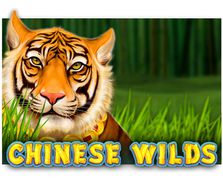 Spot a lucky tiger and walk away with a pot of gold from the beautiful Chinese Wilds slot with five reels, four rows and 720 ways to win.

The title of Chinese Wilds slot alludes to the wildlife that inhabits China, which is the theme of this well executed slot machine by Red Tiger Gaming. Once you have selected to play Chinese Wilds you are taken to a screen that walks you through the slot's basics and you immediately know that this is about the magnificent animals that we wish to observe in their natural habitat. The slot can get you close to that wish with the help of the Instant Win symbol and the Free Spins bonus, in addition to excellent and easy-going gameplay.

The lush bamboo forest background sets the stage for the reel set. Along with a shy ray of sunburst penetrating the thicket of bamboo, there are glowing insects and a clearing where the animals come to frolic. The reel set is made of gold-colored bamboo stalks and sits on a meadow of lush moss. Everything about the graphic aspect of the design breathes vibrancy and feeling good. The symbols have been drawn and rendered in a superb manner, with skillful attention to detail and a high degree of realism. Everything is in place for a joyful gambling experience with the animals that can be spotted in the Chinese wilderness, if not in the zoos of the world.

The sound score is very low key. There isn't a musical score that loops in the background and that is just fine. The sounds that appear are exclamation fanfares, the rattling of the reels and the strumming of a Chinese string instrument. The loveliest of sounds however is when you score a win thanks to the Wilds symbols. Then a melodic sound of a reel spinning goes off and speeds up as the counter winds up the amount that has been won.

About the playing preference end of the design, Chinese Wilds is rather to the point. The player does not have to click or tap around the screen to set the slots in motion. There is only one field that asks you to set the total stake you wish to spend per spin and that's it. All paylines are active and there is no need to choose coin size or betting level.

Chinese Wilds slot has face and number cards from nine to ace, which are low-tier symbols. The high-tier symbols are animals of the wild, which include a small fiery-plumed bird with a beautiful gold head; a long-beaked crane with a white turban-like head; the head of a golden-horned Himalayan ibex, and the second cutest of all animals - the red panda.

How to Play Chinese Wilds

The other symbols are the specialty symbols of Chinese Wilds slot. The first one is s smart-looking monkey who seems to be wearing a chain necklace with the wording WILD. This symbol substitutes for all other symbols except for the Free Spins Scatter and the Instant Win symbol. The latter is the cutest animal in the world - the panda, which in Chinese Wilds slots gives the player an instant win. The Scatter is a tiger who is wearing a chain of golden Chinese coins and has the lettering FREE SPINS written across.

As was said before, starting your Chinese Wilds slots adventure is as simple as clicking the SPIN button. All the player has to do is choose the betting amount that counts as total for all spins until another amount is chosen. The smallest stake is only 0.20p goes up in increments of 0.20p until £1.00 is reached; the increment goes to £2 and from there to £4. The highest amount of the total bet is as much as £100.00. Obviously, Chinese Wilds slots is low stakes and high stakes slot machine all at the same time, giving the player the option to select his or her gambling preference. Another thing that can be configured is the Auto Spins feature. The player can set the amount of the bet and select how many times the reels are going to be spun automatically.

How to Win Chinese Wilds

The Scatter symbol is the tiger, which triggers free spins when three like symbols land anywhere on the reels. The kicker comes when every free spin win increases your multiplier. The panda symbol means the player gets an instantaneous win, however, this symbol is hard to come by and it is really a matter of luck that one lands on the reels. Chinese Wilds slot is a five-reel and four-row slot, which results in a greater number of fixed paylines, amounting to 720.

The theoretical Return to Player variance has been set at 96.35% which is relatively high compared to most other slots that range anywhere between 95.00% and 96.30%; so this is something to look forward to because it could play well with the free spins feature that multiplies your winnings.

Other than this, Chinese Wilds slot does not have a progressive jackpot, which is too bad. Too bad because this slot would have been a hidden gem for distinguished players who are searching for less popular or unpopular slots and return to them often with the intention of tickling the jackpot bone.

Chinese Wilds slots is a well-made digital slot machine set in the wilderness of China. The animals give a good charm to the gameplay and represent a refreshing look away from the lot of slots out there that have unrelatable themes. Of course that the most important thing before your entertainment is walking out with a big win, but it is also important to pick a slot that sits well with you. Chinese Wilds slot is a good game to have in your picklist, not only because of the 96.35% RTP but also because of the Wild and Scatter bonuses. So come along, spot some rare animals and spin to win the Chinese Wilds slot.