Players will find a game of four rows and six reels that have a total of 20 always-active paylines. The game can trigger winning outcomes with three or more of its royal symbols and players can make bets that are as little as 10p per spin. The theoretical return to player (RTP) of Crystal Mirror is 95.77% and the variance hasn’t been disclosed as of yet. Players can play for a chance to cash prizes of up to 5240x multiplied by the bet. 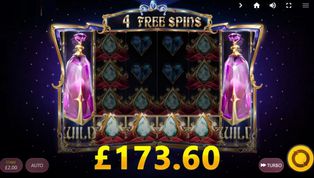 Have you ever wandered inside a hallway filled with mirrors, some of them smoking, others bending reality? That is one bizarre thing to see and experience and it is all because of the wonderful invention of the mirror. The game at hand puts us in a similar setting but instead of a reality-bending array of mirrors, Red Tiger Gaming has given us a simple double-fold set of reels that is a mirror image of one of its parts.

The ‘idea’ behind the payout system is to make winning outcomes by reflecting the symbols on the left side of the reel divide. There isn’t much to ponder here, except that the Crystal Mirror slot is an amazing reel adventure that comes with a wild symbol, nudging wilds, symbol stacks and a scatter symbol that can trigger the free spins bonus feature. It all sounds like the perfect setting for a unique slots experience.

The graphic design is right up the alley of the recent spate of releases by the same company. Players who have experienced Hoard of Poseidon slot will find a similar dynamic and an engaging set of graphic features and moving parts. The most energetic of all of the symbols is the wild, which represents some kind of a pendant that’s been studded with precious crystals, or diamonds. That symbol comes to life when it forms a winning outcome.

Crystal Mirror slots has a set of high-paying symbols represented by various crowns, each one more precious and more lucrative for that matter, than the other. These symbols are treated to light and energy as they form winning outcomes on teh paylines, however, the set of royal cards don’t fall behind in the way in which they’ve been drawn and rendered.

Overall, Crystal Mirror is fun to play and comes from a company that is stepping up its production game in order to make games like this one.

How to Play Crystal Mirror Slot

Players can venture in the hall of mirrors and press the big, yellow Spin button in order to start the reels. Each action causes the active bet to be deducted one time from the balance. But before any moves are made it is best that the player checks out the amount of the bet which can be seen in the bottom left corner.

Crystal Mirror slot has a range of bets that has become typical of Red Tiger gaming slots, and that is 10p per spin for the minimum bet and £20.00 per spin in order to play a high-stakes game and land bigger winnings.

One way to play the game is by activating its Autoplay mode, which fires up all four rows and six reels for a number of automatic spins. This enables the player to kick back and relax while the game does the bidding on its own. The Advanced menu has few other options that can be utilized in order to place controls on the balance spending.

Few other buttons are present on the screen - the thunder button causes the reels to spin and stop faster, the speaker button toggles on and off the audio and the paytable is where players can view the payouts for each of the symbols.

How to Win Crystal Mirror Slots

There are four high-paying symbols in this game and four low-paying card symbols. Winning outcomes are made with at least three and at most six matching symbols across the 20 paylines.

The Wild symbol pays 500x for six of a kind, 240x for five, 120x for four and 60x for three of a kind when that symbol lands on a payline. This is the most lucrative symbol on Crystal Mirror slot along with the diamond crown which pays 160x multiplied by the payline bet for five matching symbols.

The red crown has a payout of 120x for six, 60x for five, 30x for four and 16 for three symbols. The remaining three symbols of crowns pay between 6x and 80x multiplied by the payline bet for winnings between three and six symbols.

Four Free Spins crystals trigger 10 free spins. If six land on the reels, the player gets 15 free spins. The wild symbol or symbols lock during the free spins, for its entirety.

Every spin during the free spins, reels number one and six are a mirror-image of each other. The same is true for reels two and four and reels three and four. This means, the entire reel set becomes a mirror image, as the first three reels cast the same image on the right.

the game can be found at some online casinos as a free play demo slot which enables players to try its features and gameplay with free credits.

Players will find an amusing game. It replicates the feature of games that have locking reels, however, this game has the entire half of the reel set on a mirrored lock. Interesting concept and good execution with a high pay potential.

Discover the Crystal Mirror slot by claiming a welcome offer right from this page and play at top-rated online casinos.