Gems Gone Wild Power Reels comes with eight reels and six rows filled with various gems. Quite unexpectedly, Red Tiger has not opted for the usual cluster payout system, having included 30 paylines instead. In terms of its inner workings, the game operates with a theoretical return to player of 95.68% and has a medium variance. 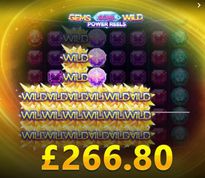 Usually, if the game is made by Red Tiger it can promise a stellar adventure on the reels. We are extending a fair warning to all slots players - the game that you are about to experience is one of the best grid-based slots in a while, and there is fierce competition in that sector.

Gems Gone Wild Power Reels slot shares a number of common elements with a lot of slots that throw around gems whose place fits regal brooches: Starburst is one example, Magic Stars 3 another, and so on. Nevertheless, the game comes multiple features that can coalesce for thrilling gameplay, and in the best possible outcome pay up to 3000x multiplied by the winning bet.

In terms of graphic design, and in our most objective regard, the game doesn't offer anything that we haven't seen before. One way to describe it is, there is a black hole in space, and it is full of purple, red, pink, orange, blue and green gems, but also with wilds.

Gems Gone Wild Power Reels slots has dynamic gameplay that compensates for the seen-it-all symbols. When a winning outcome is made the symbols show their shiny essence, while wins with the wild cause that symbol to pulsate, twirl and jitter. The entire gameplay is one amazing show of motion and the musical theme is very much in tune with the visual setting.

It’s being a Red Tiger Gaming product offers all of the intuitive buttons and controls. These can be found in the same place where they were left on the previous game by this company, that is, any of their previous games, and that's what we like about the Tigers.

The big yellow button sends the reels spinning one round per the bet. To the left of it is the Turbo button that causes the reels to spin and stop sooner than later, when it's toggled on. On the other side of the screen are the buttons for Stake and Auto.

One way to enjoy Gems Gone Wild Power Reels slot is by opting for the automatic spins. This is a great way to kick back and relax while the game does the spinning on its own. There are few optional settings in the advanced menu there, which enable you to place controls on the spend.

Last but not least, before you make a move on Gems Gone Wild, make sure that the default bet isn't a stupendous sum that you wouldn't want to wager. Select your own bet by pressing the Stake button and selecting an amount between 10p and £20.00 per spin.

One of the most amazing features that this game has is its Power Reels payout mechanism. What it does is it forms payouts consisting of two different symbols on the same payline, as long as the same kind of symbol fals on adjacent reels. Payouts don't have to necessarily start on the leftmost reel.

Another feature of Gems Gone Wild Power Reels slot is its wild symbols, which can appear randomly on any spin and trigger the Locked Wilds mode. In th event, the reels go for a respin, which can invite over a bigger number of matching symbols or additional wilds.

In terms of payouts, the most valuable symbol in Gems Gone Wild Power Reels is the wild. To get the biggest payout in the game you'll need to see eight wilds land on a payline, in return for 3000x multiplied by the payline bet.

In terms of value, there are three big (orange, pink and green), three medium (blue, teal and red) and two small (purple and red) paying symbols.

We annotated what the wilds can do, however, what we didn't mention above is their proclivity in making wild clusters. These can appear as 2x2 and 3x3 clusters on the reels, at random, and throw on fabulous floral garlands on any given spin.

The players can try the game out, check out its features, by playing it in practice mode at online casinos that host free play demo slots.

This is one helluva space adventure. If you think Starburst was a big deal, let's see how this game is going to fare with the players. Our prediction is that it will do marvelously.