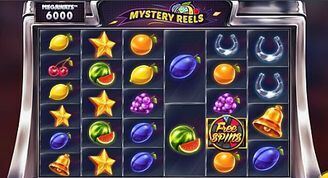 Play the Mystery Reels Megaways slot for a chance to experience the first megaways gameplay by Red Tiger Gaming. Claim bonuses and free spins to play.

Red Tiger Gaming has forayed into the megareels style of slots, and the results are bombastic. We have a retro-themed slot in the Mystery Reels, that has a shifting reel-set arrangement that can produce as many as 117,649 megaways and a gameplay that is nothing short of astonishing. This is the first such slot game coming from Red Tiger, and considering their experience and grit in the world of online slots, it is certain that they have matched the other slots that sport the same style of play.

Speaking of the style of play, Mystery Reels Megaways slot has rows that cascade whenever there is a winning combination linking the symbols on the grid. This causes those symbols to disappear and those above them to fall drown and take up their space. The room that has left in turn gets filled in by a fresh set of symbols, thus creating the cascading or falling reels style. This is how the game's megaways shift. The player doesn't start with the maximum number of active lines.

As the game takes its twists and turns, and as the grid expands the reels or contracts them, the megaways can go up or down in number, creating a dynamic gameplay that is only to be matched by square-gridded slots.

The gameplay details are much like the standard Mystery Reels by Red Tiger Gaming, which is not the Megaways version. The symbols are the same, as are few other gameplay details, with the expanded grid being the only difference. The players here can bet the smallest sum of £0.20 per spin or go for some low-high stakes action of £10 per each turn on the reels. The range of the bets is the only thing that needs to be figured out, since the paylines, rather, the megaways, never stop working on the Mystery Reels Megaways slots.

A couple of other buttons come in pretty helpful on the Mystery Reels Megaways: autospin, paytable and turbo. The last of the three being toggled on causes the reels to stop much sooner than when the button isn't toggled. The paytable is accessed from the Pays button, which is to the left of the turbo, in the bottom right corner, where the Spin button is also located. The Pays button opens up the table with all of the symbols pays and bonus feature information. And finally, the Auto button, on the opposite end, lets the players select a number of automatic spins with the option for a loss/gain limit.

This slot game sports retro symbols, such as plums, oranges, bells, stars, lucky sevens and so on. The most lucrative symbol is the lucky seven, paying 50x when six occur on the reels, in the adjacent symbol fashion, which means, they have to form a cluster one way or another on consecutive reels. There are other symbols that pay decent amounts, however, the biggest magic can occur during the Mystery Reels bonus feature - the free spins.

Free spins are awarded when at least three spins stay on the reels. This results in just 8 free games, however, there is the option to gamble the opportunity for a chance to win more free spins. There could be as many as 40 spins won, but also those 8 could become none. Retriggering the bonus game can happen whenever there are three additional scatters landing on the grid during the bonus game.

The game's top possible payout is to the tune of 10,000x multiplied by the triggering wager. This amount is rather hefty when compared to the original Mystery Reels slot, so Red Tiger Gaming has decided in a way to relegate the other slot by introducing a much more dynamic and lucrative online slot with the Megaways style of play.

Connoisseurs of online slots will cope out a familiar design, but does that make the game any less worthy? Most certainly it doesn’t This is a retro slot game but in a contemporary package. There are animated symbol wins and plenty going on on the reel set in terms of visual candy. This enhances the gaming experience, especially the big win splash with a burst of golden coins.

To play the Mystery Reels Megaways slots you can explore any one of the online casinos on this page, by claiming a welcome bonus page right here.