In terms of the graphics design the slots experts at Pragmatic Play have thrown out the window all of their designer prowess with which they've been churning out a stupendous number of releases throughout the years. Indeed, the design is the last thing on the mind of those punters who settle for a three-reel game, so we'll just let that part of the game slide under the door and into the wind. 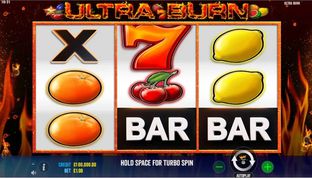 Reel Kingdom are the slots experts behind a seemingly simple online slot that does everything right to bring back the era of classic slots machines. Since the company that released the game is Pragmatic Play, we can expect a solid adventure on the reels of Ultra Burn slot.

The game is part of a spate of releases centered on the idea that three-reel slots could be as lucrative and entertaining as contemporary video slots. Most will beg to differ, but we are going to give this game the look-over nevertheless.

Ultra Burn comes with three rows and three reels that spin across five paylines. That sounds about within the expectation for a game in the 3x3 category. Needless to say, it's all about the fruits and classical symbols, but it isn't like Reel Kingdom had gone over the top to make them more appealing compared to the next game over. Just consider the contrast between a rudimentary fruit machine and an expert beast of four mega reel-sets such as the Gorilla Gold Megaways slot.

As it is customary, wins are made with three matching symbols and there can be more than a single payout resulting from the same spin. In terms of the payouts, the game does pretty well to offer a maximum payout of 500x, which can only result as an instant win.

We can't hold any gripes about Ultra Burn lacking a free spins bonus or a wild. Such is the nature of the style, so some players will just love to hate not playing the game because of that.

Ultra Burn slots has just a couple of eye candy to offer. The background of the game is a full raging blaze (hence the name of the game) and each win outcome is marked by more of the same. So when Reel Kingdom and Pragmatic Play were coming up with the title, they'd decided to incarnate that idea into a literal element of fire. A pack of analogue casino sounds do for the soundtrack and that is just about it in terms of the design and sound.

How to Play Ultra Burn Slot

Setting up for the gameplay is as easy as one, two, three reels. The good old spin button keeps its minus and plus buttons nigh and the autoplay button even nigher, just like in nearly any other game that's emerged from the same company.

To choose the bet press either plus or minus to bring out the grid with the available bets. In this regard, Ultra Burn slot offers a wide range of bets where the minimum is only five pennies per spin, and the maximum is a brackish £250.00.

If you want to have these figures translated into payline wagers, then the game offers a serious advantage to the serious slots player in comparison to most other modern video slots: the smallest payline bet is only one penny, but the highest is £50.00 per line.

In other words, the range of bets offers a meaningful payline multiplier on the winning outcomes, so even if you play a quid a spin, the wins will count for something and not just as a pretty thing on the screen for a moment.

Whether you want to take on the game in the good old one armed bandit manner of play (pulling the proverbial lever for each spin) or you want to engage in a modern way of playing online slots, the game offers both options.

We'd always go for the autoplay feature because it allows anyone to kick back and relax while Ultra Burn slot does the spins on its own. Optional controls enable you to add conditions that control the spend while the game is spinning away, so that the autoplay stops when a specific win amount has been met, or arguably, a specified loss amount.

At any rate, the 500x jackpot is an excellent reward for a game that has a theoretical return to player of 96.52% and medium variance. The symbol that rewards the best prize are the hot red sevens. You need a screen filled with these to gain the amount above, while three matching symbols pay 100x.

Sadly, the game has none. A wild would have helped quite a lot. Even a scattered paying symbol would have been just right but Pragmatic Play had decided to go with a purist approach in making this game do what it's done since the early 1900's - make win outcomes with three matching symbols and nothing more than that.

Pragmatic Play have been releasing their games as free play demo slots and online casinos host them as such far and wide. This lets curious players get a taste of these fruits with free and non-paying credits.

There isn’t much to be added, really, except that there are plenty of games like this one. In fact, you need a shovel to dig through the multitude and find one that is both pretty and has at least one extra feature. But it really isn’t about that with retro/fruit slots. Instead, the focus is on the random number generator. Pro players know what we mean by that, so sitting on a game for a number of spins may give a clue about the game’s behavior in the long run, so good luck with that.

Discover the Ultra Burn slots by claiming a welcome offer right from this page and play at top rated online casinos.