The game comes with three rows, five reels and 10 always active paylines. Winning outcomes are made with at least three symbols, but there isn’t a wild symbol to substitute for other symbols. The theoretical return to player (RTP) of Ali Baba's Luck is 95.89% and the variance is high, making big win outcomes possible. 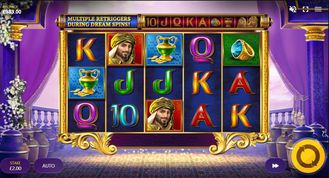 Red Tiger Gaming are taking us to the medieval palaces of the Middle Eastern shahdoms where a famed man named Ali Baba gave everything to discover the magic lamp that holds a special genie inside. Nevertheless, Ali Baba's Luck slot revolves around the riches that he managed to gather with the help of his 40 thieves. It's an amusing story that provides the basis for an amusing slot of 5000x.

The Arabesque adventure features a base game that looks modest in terms of the graphic design, but it can make for an interesting game with the help of the extra features. Ali Baba's Luck can trigger expanding symbols that can lock on the reels. There is a feature called Dream Spins and something called the Lucky Round. Sounds like a diamond to behold, so let's go into more detail.

The game makes the Arabian-themed known throughout the entire paytable. The symbols are divided in high and low paying categories. The latter consists of royal cards plus the ten card and the former category has a number of objects of value and the portraits of Mr. Baba and his princess.

Ali Baba's Luck slots does not have too many moving parts, except the reels, of course, so the symbols aren't really animated. The only display that is worth mentioning are the golden symbols that carry a powerful glow about them, but that is about it. The musical theme is a laid-back soundscape with some Arabian notes in it.

Before players start playing this game it is best to locate all of the buttons around the reel set. Because this is a Red Tiger Gaming release, those familiar with the company can find the buttons in the familiar places.

The big, yellow Spin button is located in the bottom right corner of the screen. To the left of it is the fast forward button which causes the reels to spin faster when it is kept on. In the top right corner there are three buttons - speaker, to turn off or on the sound; fullscreen mode for players who play Ali Baba's Luck slot on a computer; and the menu button that leads to the paytable.

One way to play the game is by selecting the Auto button that's located in the bottom left corner of the screen. Pressing it opens up the menu where players can choose the number of automatic spins and add the balance decrease limit and few other options.

But before you make the first move, it's best to check the active bet amount, which is shown in the botttom left corner of the screen. The button specifically says Stake and pressing it enables you to choose a wager between  £0.20 and £10.00 per spin.

Winning at the game requires at least three matching symbols, but there is an exception. The high-paying symbols can pay with only two of a kind and even though those payouts are low, they can have an impact on the balance in the long run.

Ali Baba's Luck slot doesn't have a wild symbol but it does have a special symbol and few extra features. In terms of value. the most coveted winning outcome is made of five Ali Baba symbols, which pay 5000x multiplied by the payline bet.

The princess' symbol is worth 2000x for five of a kind. The vase with gold coins is worth between 5x and 750x and the same amounts are paid for the sapphire ring.

One of the most important plays in the game is the Expanding Symbols which are added to a separate row with every winning outcome. When a win happens, one symbol unlocks to become the expanding golden symbol in the next spin.

During the Dream Spins the golden symbols are locked on the reels until the end of the feature. That bonus is triggered with three treasure chest symbols. For every additional chest symbol, the game adds four more dream spins.

The initial number of Dream Spins is determined by a bonus wheel that has numbers between 4 and 16.

Red Tiger Gaming are often ahead of the game by releasing their slots as free play demo to enable players to try a specific game and experience the bonus features and the gameplay in general.

Although it is missing a wild symbol the sticky and expanding symbols are a great way to substitute and to make a winning outcome there where wouldn’t be one. A potential maximum of 5000x is also a swell number for a high variance game.

Discover the Ali Baba’s Luck slots by claiming a welcome offer right from this page and play at top-ranking online casinos.

The Adventures of Ali Baba