Relax Gaming has opened the gates of Ancient Rome, presenting the story of Attila the Hun and his battles. The Attila the Hun slot is based on the battle between the historic conqueror Atilla and the Roman Army led by Aetius. From Walking Wilds to Free Spins, this game has a lot to offer. Let’s see what else it got. 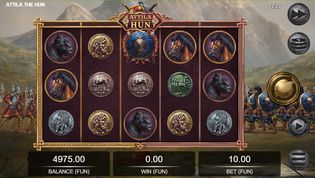 Attila was a successful conqueror and the leader of a tribal empire of Huns, Ostrogoths, and Alans among others, in Central and Eastern Europe. He is known for his several battles with the Roman Empire, which were epic and brutal. Relax Gaming has used this story and converted it into an online slot named after Attila.

Attila the Hun is a video slot from the game provider Relax Gaming. It features five reels, 20 active paylines, and six different features. The Return to Player for this game is 96.38%, which is a good number and is considered as an average for an online slot these days. Due to the features that are included here, Attila the Hun doesn’t pay that huge prizes, only up to 400x the stake (or total £40,000). However, the RTP is decent so you can count on great paybacks.

Setting bets is the first thing you have to do when playing this slot while betting options start from £0.10 and can be increased up to £100 per spin. The paytable will automatically modify your reward when you set your bet, so you will always know what you can win. Rules are pretty easy, match three identical symbols on one of the active paylines and win some cash. In addition, the Attila the Hun slot has high variance.

Attila the Hun is a history-themed game, and the background shows the battle between the Barbarians and the Roman Empire. The main characters are Attila the Hun and Aetius, together with their armies presented as wilds, coins, and shields of different colours. The game is perfectly designed and has excellent graphics. The dramatic soundtrack in the background makes the game so real that you might think that you are part of the battle.

How To Play Attila The Hun Slot

You have to place your bet and press the ‘Spin’ button in order to start the battle between Attila and Aetius. The bet can be adjusted on the right side of the reels, by clicking the silver button with a coin symbol. You will be offered 11 bet amounts from which you can choose, starting from £0.10 to £100 per spin. In the same window, under the bet section, you will find the ‘Autoplay’ section where you can adjust the number of spins that you want the game to play by itself.

The ‘Spin’ button is a golden button located on the right side of the reels. You’ll immediately notice this one since it’s the biggest of them all. If you have any doubts on how to play the game, you can always read the instructions and check the paytable to learn everything you need. That can be accessed from the three-dash silver button located down in the right corner of the game.

Players who enjoy playing history-themed slots will definitely be all over this game. The symbols are developed in a way to comply with the whole story of the battle between the Barbarians and the Roman Empire. The lowest-paying symbols are coins in green, bronze, silver, and gold, each designed perfectly. The middle-paying symbols are animals - horse, wolves, and dogs. Finally, there are two premium symbols - a blue Hunnic shield and a red Roman shield. They are the highest-paying symbols and pay up to 20x the stake for five of a kind.

How To Win Attila The Hun Slot

As we already mentioned, Attila The Hun is a pretty busy slot featuring six different bonus features. There are wild symbols included in the game, which replace regular symbols and make winning combinations. The wild symbols are Hun and Roman soldiers. Let’s go through the most popular bonus features.

This is the most frequent feature that will activate if you land the Hun or the Roman wild symbol. When they land in the base game, they will activate re-spins and will become sticky, so they will start walking in different directions - the Hun to the left side, while the Roman to the right side. The feature ends when the wilds leave the game.

In order to activate this feature, you need to have both wilds (the Hun and the Roman) on the same row, on opposite sides (first and fifth reel). Then, you will be awarded free spins and the two symbols will merge into 2x2 battle.

If the opposite general of the other army appears during the Attila or Aetius Walking Wild bonus feature, the Big Battle Free Spins feature will be activated. First, the 1 and 5 reels will become stacked wilds, then reels 2 and 4, then reels 2, 3, and 4, and the battle will begin. Each army will receive two hit points and they push each other back and forward making the reels go wild. The battle will end when the hit points go to zero.

Attila The Hun is a great game, with decent RTP and great bonus features. Players that play history slots might want to give a try on this game. It has fun for everyone.

If you’re looking to play the Attila The Hun slot, register with one of our partners, claim your bonus and you can start right away!