The reel set consists of four individual reel sets that all spin at the same time. Winning outcomes are made with at least five symbols, or more. Players can play Magnetz with at least 10p per spin. The theoretical return to player (RTP) of the game is 96.66% and Relax Gaming has not released the variance level, however, the maximum payout potential of the game is 2000x multiplied by the winning bet. 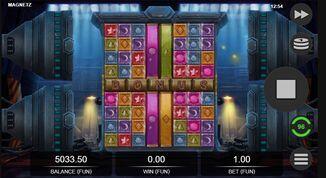 Relax Gaming are pushing envelopes in terms of novel styles of making payouts. The game at hand is one example of that. Players are taken into a technological realm that does not feature your typical reel set. Upon first appearance the screen ordinarily but there is a dynamic reel adventure unfolding with every spin in the base game. The game is called Magnetz slot and the title describes exactly what the gameplay is all about.

Magnetz comes with a base game that is quite entertaining and this is both because of the payout system and because of the features. The middle of the quadruple reel set has four vertical blocks consisting of four rows. These are joined right down the middle and they spin independent of one another. This element can trigger the so-called Magnetic Merge and the Flux Re-Spin features. In addition, the game comes with a Free Spins bonus.

In terms of graphic design the slots experts at Relax Gaming have tapped magnets for inspiration and the result is a magnet-galvanized set of symbols and a reel set that is surrounded by massive plates that exhude magnetism.

The game mechanics causes the symbols of each reel set to slam on the corresponding block in the middle of the quad-layout. When the round is over, the tiles crumble down, leaving dust behind as a new set of symbols is speedily dispatched by the magnetic vaults.

Magnetz slots doesn't make it easy to recognize which symbols belong to the high-paying group and which belong to the low-paying, because there is really one grouping of symbols of which the first three (circle, half-crescent and triangle) pay identical amounts, the diamond pays something in the middle and the hexagon and star trigger the high-paying prizes.

Each winning outcome is marked in a way that fits the theme and the look and feel of the game. The symbols are given a marvelous glow and the remaining symbols kind of twitch in place as they away for matching symbols to arrive.

Those who play Magnetz slot will find an amazing reel adventure through and through.

How to Play Magnetz Slot

Playing the game requires knowing your way around the reel set and this is meant in terms of buttons and settings. Everything is situated around the magnetic field in the middle, so there is really no need to rummage around the screen.

There are three displays at the bottom of the reels that show the amount of the Balance, the Win amount and the active bet. To the right, top to bottom are the buttons for fast-forward, coin stack, stop button, autoplay and menu. Magnetz slot also has a handy paytable.

How to Win Magnetz Slots

Winning at the game requires clusters of at least five matching symbols to form on either of the reel sets. The large vertical slabs in the middle can help create a winning outcome as these are the fourth reel for each reel set.

In terms of payouts Magnetz slot has few exciting amounts that can arrive by making cluster wins. The greater the number of matching symbols, the greater the payout potential. For example, the biggest win is 200x your bet with 20 star tiles. The last three tiles in terms of value pau 15x for 20.

The game comes with a wild symbol, however, it can arrive in five variants. There is a standard wild and multiplier wilds of 2x, 3x, 4x and 5x your winning outcome. These symbols can substitute for any of the other symbols on the paytable.

Magnetz also comes with two extra features and one bonus. Flux Respin causes the four magnets in the center to randomize between one and six symbols. When a win has been made with the help of any of the magnets the game triggers respins which can go on as long as there is a winning outcome or if there is a bonus symbol in play.

The Magnetic Merge feature triggers when two adjacent big magnets reveal the same symbol kind. In the event, both magnets spin to create a bigger chance for a payout.

When all BONUS symbols are revealed the game awards five free spins that are played on an expanded reel set which can enable bigger clusters and therefore, bigger payouts.

The game is available as a free play demo slot, which enables the players to explore what it feels like to be near a magnetic field. You can try the base game and all of the features with free credits, which don’t pay real cash.

It is a fun game to play, the payout potential of 2000x is quite alright, but we don’t know the variance level. We reckon a high variance game will suit the style more than medium to high or low to medium, but let’s find out and see.

Play Magnetz slots at a proper casino that you can find on this page - make sure you deposit to get the welcome bonus and enjoy your reel adventure.