In total, Mega Flip has six reels and 108 ways to win. Win outcomes are created with at least three symbols of a same kind that must occur on adjacent reels. The game packs a lot more than just the rare layout, as there are few features that can trigger in the base and feature games. 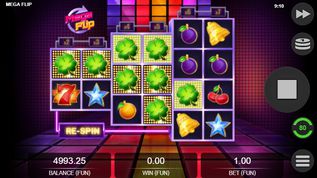 Relax Gaming are pushing through with a new release that does away with the styles of slots we've gotten used to seeing. Mega Flip slot has the so-called funnel-shaped reel-set that itself comes in few variants, but here it comes with two reels of two rows, two reels of three rows and two reels of four rows.

First off, Mega Flip triggers respins which can in turn result in more than one multiplier amount to trigger on the winning outcomes. The free spins bonus, on the other hand, comes with both multipliers and a flipped reel-set, which has the four-row reels on the starting end of the potential win outcomes - and that bumps up the chances for wins.

The slots designers at Relax Gaming have come up with a an engaging theme that consists of fruit and classical slots symbols. These have been spun up in a neon style that has become quite popular as of late and it works rather well with the theme and the layout.

Mega Flip slots is rather dynamic, especially when the automatic spins are turned on, in which case the player has the option to toggle on quick spins. Part of the gaming experience is the soundtrack, which is a unique, wavy ambient theme that makes for an excellent backdrop for the semi-futuristic theme.

How to Play Mega Flip Slot

Starting your adventure on this game requires just a brief orientation around the layout and the game's buttons. The reels can start spinning once you have selected an amount for the bet. This can be done by pressing the coin stack button, which is up and to the right of the spin button.

When you have pressed that button, Mega Flip slot lets you choose from a grid of bet amounts that start with 20p and end with a maximum of £100 per spin. There are multiple amounts between these two ends which enable low, medium and high stakes reel adventure.

Part of the gameplay is the autoplay feature which is toggled on by selecting the play button wrapped inside the double arrow symbol. In the menu, you can choose between 10 and 1000 automatic spins. Additional options are to set a loss limit, a single win limit or a win limit in general. Once ready, press play and the autoplay starts to unfold.

Few other options are in the menu, which holds information about the payouts, game rules and extra features. The sound and music can be alternately turned on or off and that wraps up all the gameplay settings on Mega Flip.

How to Win Mega Flip Slots

Winning in the game requires at least three symbols of a same kind to land in a row, starting at the leftmost reel. Wins with up to six matching symbols are possible and there is also the possibility of landing more than a single payline win. One notable thing that is missing is a wild symbol, but there is a scatter/bonus symbol that's in the shape of a diamond.

In terms of the payouts, the Mega Flip slot isn't going to knock anyone out of their socks, as the highest-paying triple seven symbol only brings double the bet for six matching symbols and returns the bet with five of the same. The blue star pays 1x, the clover 0.6x, the bell 0.4x and so on, and these are all payouts with the best possible outcome of six.

The reason for the low payouts are the multipliers, which can give the winnings a serious boost whenever the multiplier bars light up above the reels.

One of the two features in this game are the respins. These occur at random with any winning outcome and an additional Re Spin symbol on the reels. In the event, the winning symbols remain in place while all the other go for a spin. Winning outcomes are added together and re-spins continue to occur as long as there are more matching symbols to add to the previous outcome.

When three or more diamond symbols stop on the reels, the game triggers the free spins bonus. In the event you get eight spins and +2 for each diamond symbol that stops with the triggering outcome.

The Mega Flip free spins bonus is played on a flipped reel-set, where the sixth reel is where the wins begin. The multipliers are active in the bonus game, but are harder to achieve befause the wins need to form with a matching symbol stacked on the first reel for a x2 multiplier.

If the free spins retrigger with three diamonds, to add four spins, the bonus game continues but with +1 on each of the multipliers, so the first reel starts with x3.

The game is available as a demo slot at online casinos that offer slots in practice play mode.

There isn't much going on in the base-game in terms of wins because of the small payouts but the respins can change that around. Also, getting a stacked reel with the free spins bonus could lead to potentially subsequent stacks and multipliers.

Discover the Mega Flip slots by claiming a welcome offer right from this page and play at top rated online casinos.