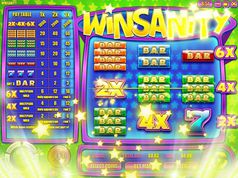 Winsanity slot is a classic-looking game from the studios of Rival Gaming. Although it aims to copy the look of older games, it has an improved gameplay by using wild multipliers. With three reels and one payline, you can spin on Winsanity for as little as £0.01 and as much as £30.00 per spin. The classic-looking symbols can form wins of up to 3.000 coins or £30,000!

As we have already mentioned, Winsanity is a 3 x 3 online slot with a single payline. Rival Gaming has done a good job designing it as a classic three-reel slot machine which is evident from the start. The reel set occupies most of the screen with the paytable visible on the left and the multipliers on the right. The Winsanity game logo is atop the reels, while the bottom of the screen is where you can find the game buttons. Everything is as simple as it gets with no flashy animations or graphics.

Winsanity makes use of standard three-reel slot symbols on its reels. Thus, you’ll find sevens, red BAR, blue BAR, green BAR and golden BAR symbols. You can also land a combination of any BAR symbols, but this is the lowest-paying combo in the game.

How to Play Winsanity Slot

Since there is only one payline which is always active, all you need to set before spinning the reels is your bet. Winsanity has a regular betting system giving you the option to use 1-3 coins for the active line. You can select the number of coins by pressing the SELECT COINS button below reel one. Next, you need to decide on the coin value. By pressing the minus and plus buttons below the coin on the left of the reels, you can select your coin value. It ranges between £0.01 to £10, giving you a bet range between £0.01-£30.00. Finally, you need to press the spin button in the bottom right corner of the screen.

If you want to enjoy the gameplay of Winsanity without pressing the spin button after each round, press the AUTO button. Select the number of rounds to be played automatically and just watch the reels spinning hoping for a win.

How To Win Winsanity

As we have already mentioned, winning payouts in Winsanity slot are awarded for combinations of matching symbols. It really makes a difference whether you’re playing with a single coin or three coins per line. You can read all symbol payouts on the paytable to the left of the reels. The combination of any three BAR symbols will get you the lowest payouts, while the combination consisting of the three multiplier wilds will get you the highest payouts in the game.

When it comes to the RTP of Winsanity, it is probably the only deal-breaker. The RTP of Winsanity is set at 94.24%, which is below what is considered an average in online slots. The average RTP stands at 96% and this tells you that the game will pay out 96% of all the wagers played over its lifetime. So, as you can see, in this regard, Winsanity doesn’t do that good. However, if you are into three-reel slots and want to play the game just for the fun, then go for it!

Winsanity is classic pub theme slot coming from the studios of Rival Gaming. It has a 3 x 3 reel set and only one fixed payline. All symbols on the reels are on-theme and payouts for landing three-of-a-kind combinations on the single line. Aside from the symbol combinations, you can also benefit from the multiplier wilds which can get you the highest payout of 3,000x your bet for the spin. The game has been optimized for mobile devices, so you can spin its reels wherever you are.

So, if you want to try some classic three-reel slot action, claim your welcome offer from the casinos promoted here at Slotswise and spin the reels of Winsanity slot for the chance to win big!