Head to the high seas and sink some battleships for a chance to win one of the jackpot prizes, including a top payout of 2500x on the winning bet. One reel modifiers can turn up all high-paying symbols following a win and multi-level free spins bonuses can bring as many as 50 free spins for the lucky players out there. 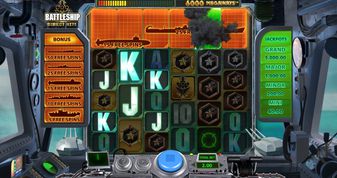 Play the super exciting Battleship Direct Hit slot for a chance to win as many as 50 free spins and the top jackpot prize of 2500x.

One of the favorite board games that you can also play using pen and paper has finally gotten a solid makeover into an online slot. The deed comes from Scientific Games who have made the terrific Battleship Direct Hit slot, which is a megaways game with its full 117649 ways to pay.

The players will find the familiar landscape with six reels, shifting rows and an engaging gameplay that includes controls on the interface much alike those of an actual battleship. The effect is an amazing gameplay, huge bonus spins potentials and four jackpot levels.

The style of play on Battleship Direct Hit slots is the familiar winning outcome avalanche. In other words, three or more of the same symbols on consecutive reels removes that win and replaces the empty blocks with a new set of symbols.

Wins in succession can occur from just a single spin and the prizes can get a boost from the missiles that are launched towards the reel-set.

The game comes from the Scientific Games studio who have it under license from Hasbro, the originators of the Battleship board game. The effect is a truly engaging slot with lots of moving parts that have a say in the game. The players are located inside a battleship's turret filled with screens, radars and levers.

One button matters in the Battleship Direct Hit slot and that is the big round and green spin button which sends the reels spinning. To the sides of the reel-set are three screen that display the free spins bonus, the jackpot tiers and the overhead jumbotron with the positioning of the ships that need to be sunk in return for a free spins bonus.

The action on the high seas can begin once you have selected an amount from the Total Bet control. This is located underneath the fifth reel. Use the minus and plus buttons to choose any amount between the minimum of £0.10 and the maximum of £100.00 per spin.

Once you have selected the amount that is preferable for your bet per spin you can go on and launch a missile into the reel-set of Battleship Direct Hit slot by pushing the spin button.

You can also set the battleship cruising and operating on its own by configuring the autoplay options. Press the button to the left of Spin and choose one of the number presets that will start that many automatic spins.

The advanced options will let you put two stops that help mind the balance: a stop on a total loss or a stop on a single win of a specified amount.

Another button helps you get information about the bonus features, the symbol pays and how the megaways payouts are made. This is available in the paytable which you can access by selecting the question mark button from the controls board.

How to Win Battleship Direct Slots

This a megaways slot that throws out winning outcomes on adjacent reels for three or more symbols and on that account, the symbol payouts aren't that great.

This is the case with any megaways slot, which is balanced out by the possibility of successive wins occurring, which can stretch the value of the bet pretty far.

The most valuable symbol of the game is the stylistic depiction of a battleship. This symbol pays 4x multiplied by the winning bet. Another set of picture symbols pays the higher amounts in the Battleship Direct Hit slots: the various medals of valor. which pay 2.5x, 1.5x and 1x on the winning bet.

The rest of the standard symbols are the low-paying grade of high cards, all of whose values are 0.5x on the bet. All of the mentioned winning outcomes are for six symbol wins.

The game has one reel modifier and a free spins bonus. The first is Turret Fire, which results at the end of any base game spin which has brought on a prize. In the event, the turrets can fire at random, at any area of the reel-set, turning the low paying symbols into the medal symbols.

The reel set can turn up missile symbols, which can be seen as scatters. When this symbol lands it launches up, aiming to destroy either of the ships that are displayed on the jumbotron above.

When a ship has been fully destroyed, the game triggers the number of free spins that are associated with it. The most elusive ship offers as many as 50 free spins.

The slots experts at SG Gaming have released the game as demo, so it is available for anyone who is looking to try it before playing with real money.

Above all, this is a jackpot game that offers four jackpot prizes relative to the triggering bet. A jackpot can be claimed during the free spins bonus if you are lucky to destroy one of the ships carrying a prize. The biggest jackpot pays 2500x multiplied by the winning bet.

Claim a welcome offer and discover the Battleship Direct Hit slots at the online casinos on this page.