Visit Loch Ness and spot Nessie's special Wild symbol on the fifth reel to see some of the barrels crack open and reveal prizes. The game of 20 paylines and five reels offers three features, including a wheel of fortune where you can win up to 500x on the winning bet, and more than once. 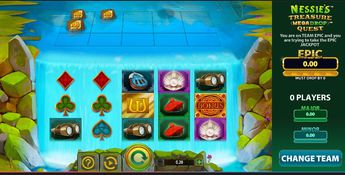 A three-tier jackpot game is set in the mysterious waters of Loch Ness, and quite expectedly, we have a game offering big win potentials called Nessie's Treasure Mega Drop Quest slot. By all means, there is a lot that is new, or shall we say seldom seen in the world of online slots, so we decided to check it out.

Nessie's Treasure Mega Drop Quest has three rows and five reels that spin across 20 always active paylines. An additional reel set above replicates the standard one in layout, however it only delivers a limited set of symbols, called 'barrels', and not on every single reel and row.

The game has more than one wild, with Nessie being the special one, as well as multiple features which include a wheel of fortune,  barrels containing prizes and a free spins bonus.

The company behind this game is Red 7, which is part of the renowned Williams/Scientific Games Corporation.

The companies behind this release have a combined experience of many years, and that is visible from the graphics design. The game has a dynamic background comprised of a waterfall, and lots of moving parts both on the reel-set and its mirror-image on the lake above.

The symbols represent objects that are related to the legend of the Loch Ness monster, as well as the cards suits. When part of a winning outcome the symbols are treated to an animated effect. The overall design of Nessie’s Treasure Mega Drop Quest slots reminds of other Williams and Scientific Games slots.

The monster exploration adventure begins when you push the spin button which is underneath the third reel.

To the right of it is the window where you can select the bets, which range between £0.20 and £200.00 per spin. In terms of line bet amounts, the smallest is a penny per spin and the biggest is £10.00 on the payline win.

Once you have selected the bet you can select the autoplay button also, which lets you choose from the automatic spins number presets between 10 and 200. There are two additional options that if set can make the spins stop either on a total loss or a single win amount.

To the right of the reel-set is a panel that displays the current amounts of the jackpots and the button that lets you Change Team or play on your own, outside the jackpot network.

The most valuable symbol in Nessie’s Treasure Mega Drop Quest slot is the Wild, which is represented by a golden W letter. This symbol pays 25x for five on a line.

Next in terms of value is the open chest filled with gold, it pays 15x and is followed by the glowing orb, which pays 10x and by the charm which pays 5x.

The game contains a set of bonus features. The Barrels feature is activated for the duration of your bet cycle. If you change the amount of the bet, the field with the barrels will get cleared and reset. Each barrel contains prizes that don't become activated unless Nessie's symbol appears on the fifth reel. In the event, the barrels will open up to reveal the respective prize.

Besides being a wild symbol, Nessie also causes the barrels reveal their prizes. If the purple barrel is broken the player gets a spin on Nessie's Wheel, where the maximum prize is 500x multiplied by the triggering bet. Each spin reveals a prize and these are added together at the end of the given given.

The Celtic-inspired Bonus symbol lands on the odd number reels and reward ten free spins when three stop on the respective reels.

The Barrels drop feature continues during the free spins and Nessie's alternative wild is still active during this bonus.

Williams have a liberal policy with their releases, and just like many of their best slots this one is also released as a demo. Players can get on  Nessie’s Treasure slot and check out its features for free, before deciding or not whether to play with real money.

In a familiar setting, look and feel of the gameplay, the players will discover a pretty game based on the legend of Loch Ness’ monster. This is a three tier jackpot slot, but besides that, it provides decent winning outcomes, especially with the wheel of fortune where the top prize is 500x.

Claim a welcome offer to discover Nessie’s Treasure Mega Drop Quest slots at some of the casinos on this page.