The player can discover a game of three rows, five reels and 20 always-active paylines. Wins are made with three or more symbols and the smallest bet is 20p per spin. When it comes to the mathematical specs, Silver Stallion comes with a theoretical return to player of 96.30% and medium to high variance. The maximum payout potential is 2500x multiplied by the winning bet. 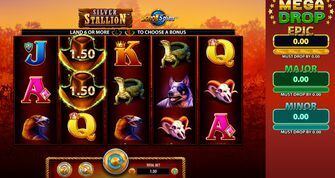 Shuffle Master and Scientific Games Digital have teamed up to release the Australian outback-themed slot that puts the cowboy on the high horse. The game comes with a set of exciting features that can result in improved winning odds and better outcomes when they are favorably triggered. Silver Stallion slot also comes with the Action Spins mode and the Mega Drop jackpot tiers.

In a full scope of the gameplay and its feature, there is a wild symbol that substitutes for the standard paying symbols, except the special and bonus symbols. Silver Stallion also has a free spins bonus and the so-called Action Spins. What is more, the wheel of fortune can result in a potentially large win multiplier.

Shuffle Master is the slots company behind this game, but they have received input from Scientific Games Digital (SG Digital), as the game bears a lot of the look and feel of slots released by them. The symbols of the game are a set of animals that can be found in the Australian outback, such as dingoes, monitor lizards, hawks, kangaroos, and of course, the stallion, which is the game's most important symbol.

Wilver Stallion slots come with few animated parts that are tied to the high-paying picture symbols. Also, the two types of hats, which are bonus symbols, are given a fiery glow around the edges, as they carry the cash prizes which are relative to the wager. Overall, in terms of graphic design, Silver Stallion doesn't go over the top in order to impress, but it is still a visually engaging game.

How to Play Silver Stallion Slot

Playing the game requires first and foremost setting up the wagers. To do that, players need to press the minus and plus buttons at the bottom of the screen in order to arrive at the desired Total Bet amount. The range of bets starts at 20p per spin and ends at a maximum of £100.00.

Once the bet has been selected, players can press the bigger of the three-round buttons in order to have the reels go for a spin. One bet deducts the Total Bet amount from the balance once.

Another way to play Silver Stallion slot is by configuring the autoplay mode. Press the smaller of the round buttons - the one on the left of the blue Spin button. The menu that opens up lets you choose the number of automatic spins from the presets that number between 10 and 200 spins.

An advanced menu enables players to set spending controls, such as stop on a specified loss amount or stop on a single win. In order to check out the symbol prizes, press the question mark button, which takes you to the paytable along with information about the bonus features.

How to Win Silver Stallion Slots

Winning in the game requires winning outcomes that consist of at least three symbols of the same kind. Silver Stallion slot has few symbols that can pay good prizes, however, all of the bonus features can also increase potential returns.

In terms of value, there are two symbols that pay 7.5x multiplied by the bet - the outback man and the hawk, for five of a kind. These symbols are the only that can pay with two of a kind, albeit only 0.1x.

The game's wild symbol is the stallion on a moon-lit background. That symbol can land on all reels, except the first one. The cowboy is the scattered bonus symbol, There are two hats, black and brown, that carry cash prizes. Up to two black nad three brow hats can land on a reel.

Six or more hat symbols triggers the selection feature, where the game can award either the free spins or action spins.  The tree symbol appears on the middle three reels. Three of these symbols award one spin on the wheel of fortune.

SG Digital has released the game as a free play demo slot. This enables players to try the gameplay and features with free credits. The free play game may be found at online casinos that host Silver Stallion slot in practice play mode where players play with free credits instead of real money.

This is a game that combines the Hold and Win jackpot bonus and a free spins bonus in the same setting. The wheel of fortune where players can win up to 2000x is an added bonus. Overall, an interesting slot to consider.

Claim a welcome offer from this page and discover Silver Stallion slots at top-rated online casinos.