Star Trek: The Next Generation Slot

Play The Next Generation slot of the Star Trek series on 50 paylines and many possible outcomes for a big win. The game comes with three reel modifiers and a second screen feature action that can create wilds on the reel-set, teleport the Enterprize's crew members and make stacked symbols. The free spins feature comes with 15 spins and the theoretical RTP is 95.50% 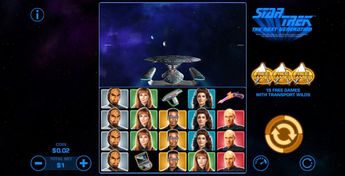 Experience the excitement on the intergalactic ship Enterprise as you spin the reels of the Star Trek: The Next Generation slot, which offers a top payout of 5000x on the line bet.

Star Trek: The Next Generation Introduction

A widely announced online slot in the mantle of the Star Trek series is released by The Skywind Group, much to the acclaim of fans and non-fans. The slot game features four rows and five reels filled with The Next Generation characters, including Captain Jean-Luc Picard, Commander Data, Chief of Security Worf, First Officer William Riker, Geordi La Forge and so on.

The game has two parts in the layout. There is the reel-set and a big-screen above showing the famed ship, The Enterprize, as well as events that are triggered as bonus features. Star Trek: The Next Generation slotis a standard multiway slot game with 50 paylines, which pay left to right when three or more matching symbols appear on a payline. The game also offers a free spins bonus, multiplier respins and the Enterprise respins features.

We have an entertaining gameplay at hand that should sit quite well with fans of the television series, as well as with casual slots players who can enjoy the thrill of a well-made slot. And Star Trek: The Next Generation slot is well-made, with attention to detail and symbol pays that seem quite generous thanks to the Star Trek characters symbols, which can become expanded on the reel.

With a top payout of 5000x on the line bet and many multiplier opportunities, this is a slot game that should be at least taken a look at.

Star Trek: The Next Generation Design

The design on this game is clean-cut and precise. The layout has been optimized for mobile so the game has been position vertically. While the symbols haven't been animated when part of a winning outcome, the TV screen above shows The Enterprise cruising through open space.

There is a cinematic musical score that sounds much alike the bits that can be heard in the series. Overall the design complements the gameplay, so those who are deciding to play this game will have a full visual and auditory experience, besides playing for a chance of a big win.

How to Play Star Trek: The Next Generation Slot

If you are ready to play the game, start by setting up the bet. Use the Total Bet control in the bottom left corner of the screen. There are two displays there, one showing the coin, which is the bet per payline win, and the other shows how much you'd be spending for each bet.

If you are ready to play the game you can press the spin button. It will send the reels spinning once. But if you wish to kick back and relax while the game does the work on its own, then use the autoplay. This function lets you state a single win or a total loss limit, which are optional settings. However, the main setting is the for the number of automatic spins.

How to Win Star Trek: The Next Generation Slots

To view the symbol pays access the paytable, which can be done by clicking or tapping the 'i' button in the upper left corner. This is where you can see how the bonus features are triggered and other gameplay information.

The most lucrative symbol is the wild, which is The Enterprise, as it pays 5000x on the line bet when five of the same end up on a payline.

One of the randomly triggered reel modifiers is Enterprize Respins. This is when the ship shoots a laser beam to trigger five respins and add additional wild symbols.

The Multiplier Respins launches enemy ships and that brings on a battle of multipliers. You get five respins with a multiplier of up to x5 with each respin.

And lastly, when the Star Trek: The Next Generation slots logo appears on the middle three reels, 15 free spins are given. Five of the crew members will be transported as stacked symbols.

One of the notable differences between this and other Star Trek slots is that the free spins bonus feature can be retriggered indefinitely.

The game is a full-blow Star Trek slot with bonus features that are more exciting when compared to the previous editions. The reel modifiers can bring additional wilds and that increases the chances for a bigger win. The free spins are a cool way to bring out the best of the video effects, with the Star Trek: The Next Generation slots characters becoming teleported onto the second screen.

To play this slot start by claiming a welcome offer at one of the best UK online casinos on this page.

Star Trek Against All Odds