Dragons and Magic comes with three rows and five reels that spin across 243 ways to win. The number of paylines can increase to a maximum of 7776 ways during the free spins bonus feature, where the players can enjoy additional features in the shape of reel modifiers. 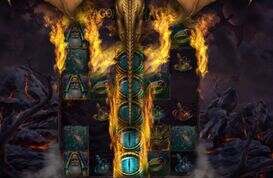 StakeLogic have gone on a trip around different styles and genres of slots, to arrive at an epic fantasy filled game that is as unpredictable as black magic. Dragons and Magic slot does not have a fixed number of paylines, which is what makes it appealing to players who enjoy high volatility slots. But there is more, of course, as StakeLogic couldn't have left this release without theis signature move Super Stake.

The players can find an energetic reel adventure with bets that start at 20p per spin. The theoretical return to player can vary between 94.32% and 94.38%. Furthermore, the game has a gamble feature that can be activated following base game wins, while the maximum exposure in up to 5000x multiplied by the winning bet.

The visual end of this game is quite stunning. We get a world of magic filled with potions, dragon eyes, dragon eggs and the magician who makes it all pop in and out of existence.

In this regard, Dragons and Magic slots is a game that can bring about a fulfilling experience. Wins are marked by dramatic events, such as smoke rising and wispy lights, and the music has been composed to fit the whole reel adventure.

The bonus feature takes the players to another background, this time a desolate terrain that's been wrecked by fire breathing dragons. The reel modifiers are exactly the mechanism that brings about that effect, with fireballs hitting the reel-set, with the possibility of enhancing the winning outcomes.

How to Play Dragons and Magic Slot

Setting up for the gameplay requires selecting an amount for the wager from the Total Bet box. This is located in the bottom right corner area of the screen, to the left of the yellow Super Stake button.

The bets begin at 20p per spin and end with the maximum bet of £200.00. There are many options between the two ends, so that the players can choose for their kind of a low, medium or high stakes slots-playing adventure.

Super Stake is an option that enables the players to play at increased odds for an extra feature getting triggered, at a cost. If you are playing one pound per spin, toggling on the Super Stake option results in bets of two pounds, however, at better odds at winning bigger amounts.

StakeLogic have included all of the controls and buttons on the Dragons and Magic slot on the left-hand side of the reels. This is where the players can toggle on or off the sound, the autoplay mode, make the reels spin faster and open up the menu along with the paytable.

How to Win Dragons and Magic Slots

Winning in the game requires getting at least three matching symbols on adjacent reels, as it is usually the case with slots that have 243 ways to win. Winning outcomes consisting of more than one matching symbol kind are possible, as the game can make wins that begin any of the three rows underneath the first reel.

Dragons and Magic slot has a wild symbol that substitutes for all other symbols, except the scatter. Low paying symbols are the four potions and the remainder are medium and high paying symbol that consist of a rabbit's foot, ring, a dragon and the magi.

Most valuable symbol is the dragon, as five matching symbols on adjacent reels pay 20x multiplied by the bet. The dragon eye Wild symbol is the other lucrative symbol, paying the same amount.

The extra features start with the wild symbols as the game has two kinds. One is a regular wild and the other does what the first one does, plus adds multipliers that can either be 2x,5x or 10x on the winning outcome. Multiplier amounts are added, so more multiplier wilds means bigger wins.

Dragons and Magic also has a free spins bonus. The dragon is scattered and three, four and five of this symbol anywhere on the reels can trigger 120, 20 and 50 spins. During the bonus, the reel set can expand by adding more rows.

Lastly, there is the Dragon Fireball extra, which is a reel modifier that converts random symbols on the reels into the same kind.

StakeLogic is known for releasing their games at online casinos that host practice play slots, so that the players can try them with free credits as a free play, non-winning demo slots.

This isn’t the only dragon and magic-themed slot, but in the collective memory of our slots expert team it is one of the few that makes a graphically powerful approach to the theme and with the specified features.

Discover the Dragons and Magic slots by claiming a welcome offer right from this page and play at top-rated online casinos.