Stakelogic peeks into Mayan tradition to get an answer to the question of how to win big prizes. Their response is the Mayan Rush slot, a 5-reel machine with dynamic and static positions that wait to reveal high-paying symbols. During the game, you’ll play with more than 3,000 ways to win, trigger the Multiplier Respins feature, or play with the randomly activated Super Stake option! Read our Mayan Rush slot review to have a closer look at the bonus features and mechanics. 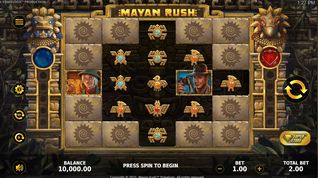 Mayan Rush is an adventure-themed online slot from Stakelogic that introduces the Mayan culture and the power behind their gods and totems. The game template resembles a title released by Yggdrasil called Valley of the Gods, as it also features the same reel concept. The grid starts on 1-3-5-3-1 formation, with 45 ways to win that can go as high as 3125 if you unblock all tiles. The main action revolves around the Super Stake feature, and you’ll have the option to activate it as soon as you start the game. Now, let’s go through the general traits of the Mayan Rush slot game.

When it comes to adventure-themed slots revolving around an ancient civilisation, you know that there will be impressive graphics and attractive in-game features. Even though it’s not the most original piece of content you’ll see nowadays, the Mayan Rush slot is not an exception. This slot game plays on a 5x5 grid that reaches a full potential of 3125 active paylines. Tiles reset into their initial shape after a losing spin, but as soon as you manage to land consecutive wins, they’ll unlock easily. This feature announces the game’s high volatility, even though the developer didn’t provide official info on the maximum payout potential. Considering the number of active paylines, we expect that wins would be between 5,000x - 10,000x your bet. However, once the official data is available, we’ll update this section accordingly.

Before you join this Mayan adventure, you’ll have to place your bets that can range anywhere between £0,25 and £25 per spin. To win, you need to match at least 3 symbols on an active payline. When it comes to the Mayan Rush slot’s base features, things get slightly different, since there are no wild symbols or scatters that will boost your gameplay. But don’t worry, since you’ll have a chance to play on a few exciting bonus games. The totems from both sides of the reels are there for a reason, as they collect winning symbol orbs and activate the Rush Mode Respins feature. You’ll also benefit from the random Super Stake round, but have on mind that this will effectively double your bets on each spin. But, more on that in a bit, now let’s see what this adventure is made of behind the reels.

As we’ve mentioned earlier, the Mayan Rush slot explores the Mayan culture and traditions in an adventuristic feel. Even though the setup might look a bit dark and unconventional, it gives a classy, mystic, rich touch to the gameplay. Reels are placed between two totems, while the action revolves in front of a carved brick wall. The golden colour dominates on both the reels and symbols, giving the lucky and abundant look. The background music is pleasing and suitable to the atmosphere, sounding like ritual spells.

On the paytable, we have six golden animal icons with different gemstones on them. The higher-paying symbols are represented by two Mayan leaders coloured in red and blue. The male and female explorer are also part of the high-paying symbols, worth 20x your bet for 5 of a kind. Wild symbols or scatters aren’t present here since the bonus games are triggered by random events, or by activating all reel positions.

The theoretical RTP (Return to Player) percentage of the Mayan Rush slot is 96.05% which is the industry average. In addition, the game has a high variance so there won’t be frequent and big wins during gameplay. Since we don’t know the cap for the maximum payout, we can’t say how much you can take out from the game, but looking at the math model, we expect a win of up to 10,000x your stake. In our Variance, Volatility and RTP guide, you can read more about different models in online slots and see which one suits you best.

The Mayan Rush slot offers a different in-game experience regarding bonus features. Here we have the Super Stake option that you can activate as soon as you start the game. However, have on mind that this option will effectively double your bets per spin, so make sure you’re comfortable with it. You’ll also activate the Rush Mode Respins feature when you unblock all static positions on reels. Let’s see how these features work in more detail.

As the slot’s name suggests, the whole point of this slot game is to remove the tile blockers on the reels so you can play with the 5x5 setup. After you form a winning combination, it creates and unleashes an orb that activates certain number of blocks. If you’re lucky to unblock all the tiles, you’ll trigger the Rush Mode Respins feature. From this point, winning symbols are collected in the two totem metres, depending on their colour. Here’s how they’ll work for you:

Multiplier Totem: Located on the left side of the reels and collects the blue coloured symbol orbs. The multiplier starts at 2x and increases for +1 every time you fill out the metre.

Life Totem: Located on the right side of the reels. This totem starts out the game with one life, and you get an additional one every time you fill out the metre with red symbol orbs. After a losing spin in this round, you’ll lose one life. As soon as you have spare lives, you’ll obtain the 5x5 setup active.

Before you start to spin the reels of the Mayan Rush slot, you’ll be given an option to play with an active Super Stake option. This feature doubles the price of each spin. On a random losing spin, you can get win 3 respins. When they start their reel action, a coin symbol is placed in the middle position of the centre reel. These coin symbols activate blocked tiles above and below them. Each time you land a new coin symbol, respins reset back to 3. If you have a symbol of 25 coins on view, its value is multiplied by x5, and if you manage to unblock all reel positions, your total wins will be multiplied by 2x.

Stakelogic also provides access to their well-known Gamble feature. If you opt to play it, you’ll have to guess the colour or a suit of a card before it’s picked. If you pick right, this option will double or even quadruple your wins, but if you pick wrong, you’ll lose everything. So, before you go all in, make sure you’re comfortable playing with this option; otherwise, you may want to skip and proceed.

The Mayan Rush slot is mobile-friendly, and you can play it on any mobile and tablet device. It is developed with HTML5 and can adjust to any small screen, on any operating system. You’ll receive the same high-quality design and seamless user experience when playing on a mobile device.

Stakelogic is a well-established slot game developer that has released a number of innovative, high-quality slot titles. One of their latest slots features the popular Megaways mechanic called Super Joker Megaways. Here, you’ll play with cascading reels and the Super Joker Mode that might win you 2,592x your bet. Or, if you feel like you’re up for some voodoo reel magic, check out Voodoo Reels, a medium-variance slot with free spins bonus and other features that bring you 5,000x your bet. For those that love to continue the reel adventure on another location, visit the National Park in Africa in the Serengeti Wilds slot, as we’re sure you’ll love the bright, vibrant look of the setup.

As a conclusion to our Mayan Rush slot review, we can say that this is a well-designed slot adventure that offers everything you need – exquisite design, engaging gameplay, and a nice set of features. With the Super Stake feature and Rush Respins, you’re guaranteed to have a great time while spinning the reels of this mystic, adventurous slot game. Good luck!

Explore the Mayan Rush slot by claiming a welcome offer right from this page and play at top-rated online casinos.