Rambo slot plays on a standard layout of three rows and five reels. These spin across 20 always-active paylines that can generate the game's maximum exposure payout of  7125x or winnings up to that number. The game has a medium to high variance and a theoretical return to player of 94.51%. 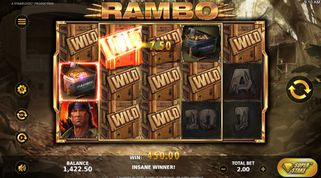 StakeLogic take the slots action to one of the greats in the action movie genre - Rambo.

The game is as packed with stunts as any movie in the famous trilogy. Players will discover the Super Stake option that has become part of other games by StakeLogic, such as The Expendables: New Mission Megaways, and its function is to up the odds at getting extra features, at a cost per each bet while active.

The game is packed with a number of extra features that include reel modifiers, which can bring about outcomes with a stronger win potential. In addition to these, there is a free spins bonus feature and overall a great reel adventure ahead.

The graphic design creates a familiar theme for fans of the movie franchise. The reel-set is placed against a background that shows a hideout, while the objects on the paytable are just in line with a revenge-soaked action movie: a quiver with arrows, boxes of ammo, hand grenades, crates with explosive, and so on.

The low paying symbols in Rambo slots are stone-cast renditions of the high cards (ten to ace), which have some bullets embedded inside. Winning outcomes are noted with a raging, molten effect surrounding the payline, and a fireball that passes throughout. The wilds cast a bombastic effect across the entire reel-set, as this is the explosive that Rambo likes to use to save his sly hide from the bad guys.

How to Play Rambo Slot

StakeLogic have created an intuitive arragement of the controls and settings, so starting your adventure is as easy as tying a band around your forehead. Make the reels spin by pressing the lone circular button on the right side of the reels.

To change whatever has been set as a default bet by your online casino, use the minus and plus buttons in the bottom right area. The range of bets begins with 20p and ends with £50.00, the maximum wager in the game which has a payline value of £2.50 for each of the 20 lines.

Those players who like to play Rambo slot with more guns and ammo can choose to toggle on the Super Stake button. This causes each spin to come at improved adds in triggering a reel modifier, at a cost which is double the initial bet.

Last but not least, Autoplay is an option that many players like to choose for a hands-free reel adventure. Press the play and circular arrow button in the left bottom area to configure the automatic spins round.

How to Win Rambo Slots

The 3x5 reel-set and 20 paylines trigger wins with at least three matching symbols. There can be more than a single win outcome resulting from the same spin and there is a wild that substitutes for all of the standard symbols.

Speaking of the wild, it is part of the reel-modifiers, which can result in multiple such symbols occurring on the reels. In terms of payouts, the most valuable symbols are the wild and that of John James Rambo, which pay identical amounts. The latter symbol pays with two of a kind, and surprisingly, a prize that is quite decent at double the bet (2x).

Three of Rambo's symbols pay 5x, four pay 12.5x and five pay the instant big-win prize of 100x multiplied by the winning bet. The crate of ammo pays 40x, the hand grenade 25x, the arrows and quiver 17.5x and the machete 12.5x. All of these outcomes are for five matching symbols.

A free spins bonus feature is in order for a round of improved odds that don't cost anything above the bet that triggered it. You need to land three scatter symbols to get 10 free spins, four to get 20 and five for the ultimate 50 free spins. The scatter symbol is represented by a king cobra.

Enter, reel modifiers. The wild symbol can occur as a wild multiplier, active in the free spins feature on the three reels in the middle. The multipliers come at random, with either 2x, 3x or 4x on the win.

The base game can shake out an Explosive Wild symbol on reels two, three or four. In the event, the TNT box sets off an explosion which invites an avalanche of a random number of wild symbols. During the free spins bonus, the ensuing wilds carry a multiplier amount.

The wilds that appear on the screen in stacks trigger respins, for each visible wild and until they expire from that round.

StakeLogic are responsible for releasing the game as a free play demo at online casinos that host slots in practice mode, enabling players to try Rambo slot for free.

Yes, the RTP is lower than average, but the Super Stake option can tip the odds at any given spin, so that the reel modifiers can improve the win outcomes. Overall, this is a great game to experience and one that is potentially lucrative.

Discover the Rambo slots by claiming a welcome offer right from this page and play at top-rated online casinos.