Sidewinder Quattro comes with a standard layout of three rows and five reels. These spin across ten paylines per each reel-set. This means that having any number of additional layouts increases the number of paylines by ten. The cost of the bet increases with each reel-set, but so doe the chances for winning a prize. 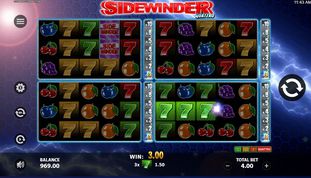 StakeLogic are releasing another online slot that can transform into a game with quadruple reel-sets. Sidewinder Quattro slotis the first continuation of what may become a Sidewinder series. Both the previous and these games are in the classical fruit slots theme and offer a feature that has found approval amongst slots players.

The reels on the Sidewinder Quattro can shuffle their positions and increase the multiplier amounts at that with any losing spin. This is, however, the only feature of the game and it comes at random, but what it can do is increase the win multipliers by up to 10x on each reel-set. The feature is essentially a form a respin modifier and because it defines the game, we don't expect it occurring at intermittent intervals.

The slots designers at StakeLogic have created a rather simple slot game, when it comes to the graphics design. The game is all about the fruits and these are drawn in a very basic way. The reason for this is that four reel-sets will shrink the visual niceties, had there been any, so the Sidewinder Quattro slots makes this plain and simple.

This doesn't mean that StakeLogic have made an unamusing slot. There are few visual candies that occur on the reel-set. Wins are marked by a blue orb passing through the payline or paylines and the shuffling of the reel-set when the feature triggers is also a nice event to see taking place.

The choice of sounds makes for an analog take akin the classic slots out there and a musical track is missing, but you feel that there is no need of anything like that for this game.

How to Play Sidewinder Quattro Slot

The game makes its entrance as a single reel-set of five reels and three rows. The way to increase the number of reel-set is by pressing the buttons in the bottom right corner, which correspond to the number of active sets. Of course, the word Quattro means there will be four reel-sets.

Making your selection is going to reflect on the Total Bet amount, which is shown also in the bottom right corner. Four sets played at the minimum stake of one penny per payline, or 10p on each reel-set, results in a total bet of 40p when playing on all four.

Sidewinder Quattro slot has a maximum bet of £80.00 and this comes with having all four games on. Notable also is that each reel-set has its own multiplier meter on the right-hand side. These work independently. So when there is the shuffle feature occuring on two or more sets simultaneously, the meter will refer the multiplier for its specific set.

The game can be played in Autoplay mode. On the left hand-side are three circular buttons that pertain to the gameplay. The one on top lets you choose the bet, the one below is to toggle the fast forward option to make the reels more speedy, and the third one from the top is autoplay.

Pressing this button opens up the menu where you can choose the number of automatic spins. Sidewinder Quattro also offers to stops on the auto mode, by setting a loss limit nad a single win limit. These are optional. When ready, press the green start button.

How to Win SideWinder Quattro Slots

When it comes to the payouts, the game offers a decent schedule of payouts. There are only four symbols that don't return the initial stake for withs with three symbols. All other symbols pay more than the bet that had triggered the payout.

In terms of value, the most important symbol is the SideWinder Quattro slot logo. It pays 5x the bet for three of the same, 10x for four and 50x for five. The yellow, red and green seven symbols pay the mediuim and high level wins.

The yellow seven pays 20x for five, 6x for four and 3x for three matching symbols. The red seven pays somewhat less, 10x for five and the green seven pays 6x for this outcome.

Note that Sidewinder Quattro makes the payouts on each active reel-set. So if there are two reel-sets that have four side-winder symbols on any of the ten paylines, that will count as two times 10x for the winning bet.

The only bonus feature of the game is the aptly named Sidewinder Feature. It can occur with any non-winning spin. In the event, the reel-set that's been given the feature at random, is going to have the reels reshuffle.

The Sidewinder feature continues to repead for each ensuing win outcome. A non-winning reshuffle stops the bonus and the game goes back to take a paid spin.

StakeLogic are known for releasing their online slots as free play demos. This allows the players to try the game free of charge and then decide to play it with real money.

We have a game that makes respins in another way, and offers win multipliers for each positive outcome. It's a nice approach that can lead to some surprising wins.

The volatility is medium and the RTP is 96.01%. The maximum exposure is a rather big £50,000 which can result from a single spin, albeit for the biggest bet and on all four reel-sets.

Discover the SideWinder Quattro slots by claiming a welcome offer right from this page and play at top rated online casinos.