Islands floating in the skies and pink sunsets are part of the magical world created for the Divine Lotus slot which goes on to stun the players with the overall gameplay and design features. Besides the visual niceties, the game offers a sizeable top payout, which can result of a single spin, that is to the tune of 8700x multiplied by the winning bet. 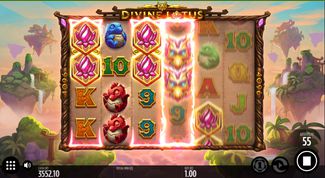 Play with the dragons for a chance to win up to 8700x on the bet in the Divine Lotus slots.

Divine Lotus was created in the online slots production studio of Thunderkick, a company of standing reputation for making excellent games. This release comes with 4096 ways to pay and a dynamic gameplay that also offers a bonus feature. Besides the free spins bonus, a base-game feature helps towards the potential payouts by a mystery symbol transforming for any regular paytable symbols.

The payouts are made on consecutive reels, regardless where the symbol is placed on the reel's vertical. Starting from the leftmost reel and on to the right, three or more symbols of the same kind can produce magical winning outcomes for the lucky players out there. Let's check out the fine details that let you in on how to play the game and what the payout combinations could bring.

Thunderkick have made an entire world of fantasy, inhabited by scaly creatures and glowing lotus pods. The background to the reel-set is subtly animated as are the high-paying and special symbols. In terms of its visual effects, Divine Lotus slots doesn't try too hard to impress, and this makes it an easier choice for the knowing players.

Each winning outcome is accentuated by a modest light show, save for the big wins which are made to be known. The theme and the design are spot and, yet Thunderkick have added an extra touch with the musical score, which is a dreamy thing filled with, again, subtle effects that add to the gaming experience.

How to Play Divine Lotus Slot

As for the game setup those who are familiar with online slots produced by Thunderkick will find it easy to get into the game.

All of the controls are in the bottom of the screen. The spin button is in the bottom right corner, as is the autoplay button that is to the right of the other.

To set the automatic spins mode in Divine Lotus slot press that button and choose from the number presets. There is a check-box there too, which is optional and tells the game whether to stop the autoplay when a bonus feature is won.

Because this is a mobile-fitted game, the layout displays seamlessly in landscape mode and all of the controls work at the touch of your fingertip.

As for the bets, you can select from a range of wagers that are accessible in the bottom right corner. Press the poker chip button that has the number one inscribed in. Here, the smallest bet is £0.10 and the biggest bet is £100.00.

Whatever bet is selected, the stake will always play towards the entire 4096 potential ways to win. The dot-grid icon is for the menu and here players can view the paytable and the game rules.

How to Win Divine Lotus Slots

The 4096 ways to pay offer incredible amounts of fun for the players. What makes this game rare are the two symbol payout with the dragon symbol, which pay 1x on the bet. The entire reel-set of four rows and five reels can produce wins of up to 6 symbols.

The most valuable of these is the dragon with a top payout of 10x on the bet. This is followed by the red baby dragon with 5x on the winning bet with six matching symbols. The other dragon symbols are green and yellow, both paying the same amount of 4.5x on the win of six. A fourth baby dragon pays 4.2x.

The wild is represented by the W letter and substitutes symbols in any win, except for the mystery and scatter symbols.

The mystery lotus symbol can help increase the chances for a win. This symbol transforms into any, except the special symbols and the low-paying symbols. That means, high-paying symbols come with a greater chance for a win. The symbol may not transform is has been removed from the reel-set by the Symbol Meter.

The symbol meter in the bonus game collets the lotus gems. When the meter is filled the designed substitute symbol is removed from the reels and replaced by a mystery lotus in each spin.

The bonus is triggered with three or more of the lotus flower symbols, which can land anywhere on the reels. Perhaps not without a reason, Divine Lotus starts you off with two free spins, however, each additional scatter on the reels adds one.

The slots experts at Thunderkick want the world to know about this release, so they have it available as a free play demo slot.

We have a kicker symbol and a free spins bonus, and a chance at the game with high-paying symbols being substituted by the lotus. A top payout of more than 8000 coins can happen from a single spin, and this is multiplied by the winning bet, which sounds like a huge potential jackpot prize.