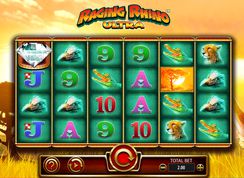 If you ask some experienced player of online slots what one of their favourite games is, there are big chances that they will say Raging Rhino. The Raging Rhino Slot is one of the most popular online slots ever made, and it’s also featured at hundreds of online and land-based casinos. As a result of the game’s popularity, WMS released the Raging Rhino Megaways Slot that offers more than 100,000 paylines, as well as the Raging Rhino Rampage Slot which has also become a huge hit.

Now, WMS is adding another online slot in the Raging Rhino series - Raging Rhino Ultra. It’s a six-reel video slot that features 4096 paylines. If you’ve ever played some of the Raging Rhino slots online, you’ll be familiar with the layout of this one. Raging Rhino Ultra may not look any different from the others, but there are a couple of new features which we’ll explain below. They include progressive jackpots, free spins, Expanding Reels, and a Stampede Bonus.

The Raging Rhino Ultra slots comes with an RTP of 96.18% which is a decent percentage for online slots these days. The game allows more options to set your bet which start at £0.08 and go up to £60 per spin. It has a medium variance which is the most popular category of variance slots among players. It means that Raging Rhino Ultra offers smaller but more frequent wins compared to the high-variance slots. In addition, if you succeed to land the perfect combination of high-paying symbols and multipliers, you can gain wins of up to 1000x the stake, or even more if you claim a progressive jackpot.

When it comes to the high-paying symbols, Raging Rhino Ultra features different animals, including a cheetah, a gorilla, a crocodile, a badger, and the Rhino himself. Of course, the highest-paying symbol is the Rhino, and landing two of which will give you a win. Moreover, the wild symbol is designed as the game’s background that features a tree in the desert. And finally, there is a diamond symbol which represents the scatter. Overall, this game has a high-quality design that players enjoy since the original Raging Rhino was launched.

Before you start spinning the reels of the Raging Rhino Ultra slot, you must select the bet per spin that you would like to play. As we’ve mentioned above, this game accepts bets starting from £0.08 and going up to £80 per spin. You can adjust your desired bet per spin by pressing the plus and minus buttons located under the reels. Once you’ve chosen the bet to play with, click the circular arrow button in the centre under the reels, and you’ll start spinning.

Furthermore, Raging Rhino Ultra slot has an Autoplay feature that allows you to play this game hands-free. Press the circular button on the left side of the Spin button and select how many auto spins you want. You can choose from 10, 50, 100 and 200, as well as adjust the win and loss limits. If you want to check the paytable and discover the bonus features, press the button with a question mark and you’ll find all the important information about the game.

In order to win when playing the Raging Rhino Ultra slot, you have to land at least three low-paying matching symbols on one of the game’s paylines from the leftmost reel. When it comes to the high-paying symbols, the game requires landing at least two of them in order to create a winning line. The slot’s most important standard symbol is the Rhino, so if you form a winning line with six of them, you’re in luck. Plus, the game has wild and scatter symbols that contribute to landing bigger winnings, as well as activating bonus features. The wild symbol can replace any other regular symbols except for the scatter. It helps you form winning combinations.

The expanding reels is a popular bonus feature that is included in plenty of online slots these days, including the Raging Rhino Slot. This feature can be randomly triggered on any spin, and when it does, two reels can increase up to six positions in height for the next spin. When the spin ends, the reels return to their original format.

Stampeding Reels is another bonus feature included in the Raging Rhino Ultra slot which can be randomly triggered during the base game. When it’s triggered, extra Rhino symbols are stacked on all six reels, making the opportunity to form winning combinations featuring the Rhino symbol. This bonus feature is actually included in the Raging Rhino slot found at land-based casinos, but this is the first time we’ve seen it being added to an online version of this game.

Moving on, the Raging Rhino Ultra slot has a free spins bonus feature that is triggered by landing at least three Diamond scatter symbols anywhere on the reels. Three, four, five or six Diamonds will give you 8, 15, 20 or 50 free spins respectively. During the free spins, each wild symbol included in a winning line will multiply the payout of that win by 2x or 3x. In addition, during the free spins round, if you land additional diamond symbols, you’ll receive more free spins.

Probably the biggest sensation in this version of Raging Rhino are the progressive jackpots. The Mega Drop feature consists of three progressive jackpots - Minor, Major, and Epix, which will trigger at a maximum value -  £500, £1,500, and £15,000 respectively. For each spin, a proportion of the player’s total bet is contributed towards the jackpots, and all three jackpots are randomly triggered. When a progressive jackpot is awarded, the jackpot amount is reset to approximately 25% of the paid value.

The Bonus Buy or Buy Pass feature allows you to buy yourself a direct entry to the free spins for a cost of 75x your stake. When you use the Buy Pass feature, the Expanding Reels feature will expand the reels up to 8 positions in height.

WMS has released the Raging Rhino Ultra slot as a free play demo at online casinos that host demo slots. By playing the demo version of this online slot, you can practice and test out the game, in order to see if it’s worth placing your bets at.

The Raging Rhino Ultra slots is optimised for any mobile device. WMS has optimised it for all operating systems so you can play it from anywhere you are. You don’t need to download any software or app to play this game. Just access your favourite online casino, open the slot and it will load in your mobile browser.

Even if it looks identical to its original version, the Raging Rhino Ultra slot is a great game that has a couple of attractive bonus features, including progressive jackpots. For a game with three jackpots, it has a decent RTP at 96.18%, as well as a great winning potential. If you’re a fan of the Raging Rhino slot franchise, you’re going be a fan of this one too.

Discover the Raging Rhino Ultra slots by claiming a welcome offer right from this page and play at top-rated online casinos.